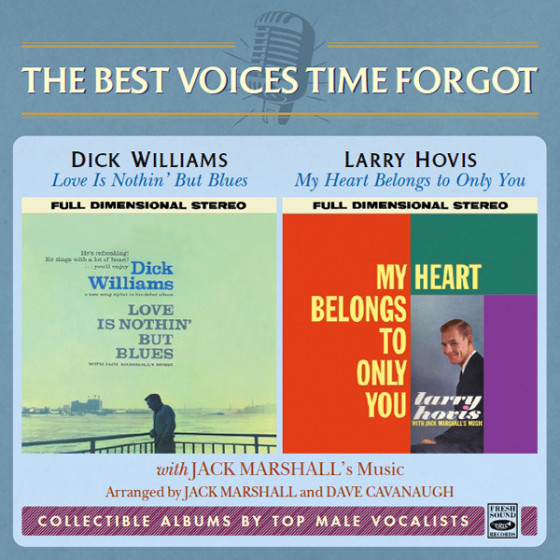 Love is Nothin' But Blues
Dick Williams (1926-2018) was the older brother of Andy, and along with Bob and Don, they appeared as the Williams Brothers quartet to perform on radio shows, movies and with singer-coach Kay Thompson in a popular and entertaining nightclub act. For six years the Thompson-Williams alliance went from one triumph to another. Following their dissolution in 1952, they all went their separate ways. By then, Dick had started a solo career, when he joined the Harry James’ Orchestra two years earlier, and during his career, he sang on hundreds of commercials and did choral arrangements for Andy. "Love is Nothin' But Blues" —his impressive debut album— came out in 1960. In it, Dick applies his pleasant baritone voice to a flock of standards. Some are slow in the ballad style, but most of them move along at a light swinging pace, with a lot of rhythm, and some nice backing by the Jack Marshall orchestra.

My Heart Belongs to Only You
Larry Hovis (1936-2003) was the singer and actor best known for playing Sergeant Carter on the 1960s television sitcom “Hogan’s Heroes.” Even though he recorded some successful singles, "My Heart Belongs to Only You" was his only album. He picked his favorite romantic ballads and some popular up-tempo tunes, as well as a couple of fine originals, and sang them all with remarkable ease and a flair all his own. Jack Marshall’s music in the background provides smoothly understated support, sparkled with fine solos by trumpeter Don Fagerquist and trombonist Milt Bernhart.

"The Dick Williams and Larry Hovis albums were arranged and conducted by Jack Marshall, with Dave Cavanaugh supplying some arrangements for Mr. Hovis’s album. Mr. Marshall was a jazz guitarist and composer as well as a superb arranger.

Dick Williams was the third of the four Williams Brothers, whose most famous member was Andy. He was born in 1926 and died in 2018 at age 91. The four Williams Brothers performed on radio, in movies, and for six years beginning in 1947 performed with Kay Thompson in a highly-successful nightclub act. When that ended, the brothers went their separate ways, but by then Dick had also been singing with Harry James’ Orchestra. In later years he sang in hundreds of commercials, did choral arrangements for his brother Andy, Perry Como, Steve Lawrence & Eydie Gorme, and Julie Andrews. This is his only album, but he can be heard on some recordings with Harry James’ Orchestra, and he recorded a handful of singles in the mid-late-1950s for RCA Victor Records and Decca Records. He also had a part in a short-lived Broadway musical in 1957 titled “Copper and Brass,” which starred Nancy Walker. He was the choir director and featured soloist at Encino Community Church in California for many years and continued to sing, arrange and write well into his 80s.

His voice is strong and, given his musical background, unsurprisingly excellent. He is a baritone, and although now and then he sounds a bit like his younger brother, one more often hears similarities to Frank Sinatra or Bing Crosby, and during one song I was reminded slightly of Dean Martin. This is not to say he sounds like he is imitating any of them, because he does not, but so many male singers of that era were certainly influenced by Mr. Crosby and later Mr. Sinatra. As befitting an album titled “Love is Nothin’ But the Blues,” which was recorded in Hollywood in 1960, many of the songs are melancholy, but not all are about break-ups or regrets. “Love Letters” and “It Could Happen to You” are actually positive songs, even if the former is sung about someone far away. But, yes, most are about lost loves or current bad relationships. As it happens, “There’s No Fool Like an Old Fool” is heard on this album and Ms. Dahl’s album.

Larry Hovis was a multitalented performer and writer who is probably best-remembered as munitions and demolition expert Lieutenant Carter on the long-running US TV sitcom “Hogan’s Heroes.” He was born into a show business family in Wapato, Washington in 1936, and grew up in Houston, Texas. He started out as a vocalist with his sister Joan, and then joined a quartet called the Mascots, who appeared on the “Arthur Godfrey’s Talent Scouts” TV programme. While earning his degree in philosophy from the University of Houston, he was signed to Capitol Records after he sent them a demo recording of a song he wrote titled “Every Time I Ask My Heart.” He recorded a few singles and this album, “My Heart Belongs to Only You,” in Hollywood in 1959. That same year he appeared on the album “Sweet Singing Swing!” by The Bill Gannon 3 on Carlton Records. The group was popular in the Houston, Texas area, and he played drums as well as sang. On the back cover of that album there is a note, “Vocals by Larry Hovis by permission Capitol Records.”

He later appeared in Off-Broadway and Broadway revues and began doing stand-up comedy. In 1966, he and Robert Clary, Richard Dawson, and Ivan Dixon recorded a Sunset Records album titled “Hogan’s Heroes Sing the Best of World War II,” in which he sang “Lili Marlene” and “Spring Will Be a Little Late This Year.” He was one of the writers for the pilot episode of “Rowan & Martin’s Laugh-In,” for which he and others were nominated for an Emmy Award. He appeared on various episodes over the years and was a regular cast member during the fifth season. Later he produced TV game shows. His final acting credits were in 2002. He was a professor in the drama department at Southwest Texas State University (now Texas State University) from the 1980s until his death from esophageal cancer at age 61 in San Marcos, Texas in 2003. Although in the long run he was not known for his singing, and for whatever reason this album was his only solo one, he certainly could have had a major career. On this album his youthful, earnest tenor voice is gorgeous. There is not a bad track on the album, which includes the title song, “But Beautiful,” “Love-Wise,” a beautiful song that I had never heard before, “Nice to Be in Love,” which I had also never heard before and was composed by Mr. Marshall, “Polka Dots and Moonbeams,” “Exactly Like You,” and one of his own compositions titled “I Want to Fall in Love,” which shows great songwriting skill."

"It's simply bewildering how many excellent vocalists have been overlooked over the years. Each of these single disc reissues of two albums is chock full of wonderful and personal singing that is going to make you wonder “how did I ever not know about this music?”. Well, wonder no more.

I’m consistently startled as to how many great male singers have had careers and albums under the radar. This album by Dick Williams (not the famed baseball manager, but then, you never really know), brother of Andy Williams, swings harder and better than anything that the younger sibling released. His voice is a darker shade of Sinatra, and it is late night hip on the patient “I Cried For You”, noirish on “Love IS Nothing But The Blues” and swaggers like Ol’ Blue Eyes” for “The Blues Don’t Care”. On the uptempo “Blue” Williams swaggers like it’s a night at the Copa, and the Nelson Riddle-ish charts of “Love Is A Serious Thing” and the ultra hip “There’s No Fool Like An Old Fool” will make you think this 1960 session is a secret 50s Capitol recording. WHOA!

But the real hoot is a 1959 session by Larry Hovis, who is best known for his role in the hit TV show “Hogan’s Heroes”. Who knew that this POW sounded like a boy-next-door version of Mel Torme’, teaming with reeds on a lovely “My Heart Beongs To You”, re-assuring on the upbeat bopper “’Deed I Do” and cozy on “S’posin” and “Polka Dots and Moonbeams”. He’s got a wde eyed sincerity for “Love Wise” and is finger snapping cool for “As Long As I Live,” particularly strong for “But Beautiful”. All that’s missing is a series of duets with co-star Robert Clary (who also sang a bit) to make this absolute perfection. Perfect for a captive audience-badda boom!”