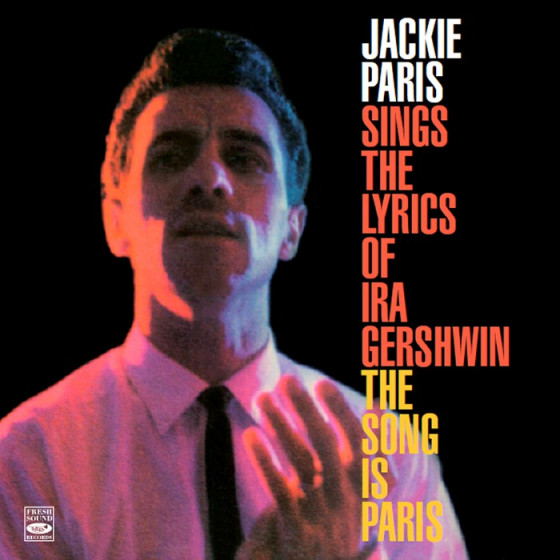 Jackie Paris (1924-2004), began working on 52nd St. in 1947, back when the New York City street had started to earn its fame as one of the two epicenters of bop music, and by 1953 he had earned Down Beat Critics Poll award as best new male singer of the year.

Although he never managed to build up the kind of in-group following other singers did, Paris always retained that elusive quality that puts him just beyond the fence that is straddled by so many, into territory that is unmistakably that of jazz.

The two albums included here, from 1960 and 1962 respectively, are a rewarding example of his vocal range, and proof of his flawless phrasing and articulation. Sings the Lyrics of Ira Gershwin is a fine set of readings of a fine set of songs, arranged by pianist Irving Joseph, all sung from the inside, from the heart of what the song really is. An excellent example of how these songs should be sung: with care and knowing, and more than just a hint of jazz.

The first six tracks of The Song of Paris include some splendid writing by Bobby Scott for three different groups, one featuring woodwinds, another strings, and a third one with brass and saxes. On the remaining five tracks, Paris, in addition to singing, is heard on guitar for what was probably the first time since late the 40s.

All in all, two excellent albums by one of the finest of jazz singers and one of the most consistently overlooked Jackie Paris.

"On the documentary Tis Autumn, jazz journalist Will Friedwald states that the way to separate real jazz fans from the rest of the crowd is if they have any Jackie Paris albums. Paris was the rare combination of being both A) an excellent singer and B) completely overlooked and obscure for 95% of his career. He was a mix of California Cool like Baker, but old school hip like Bennett, but all his own, and his own was wonderful.

He only released a handful of albums; they are all wonderful. These two from the early 60s are high water marks, with Paris teamed with some real boppers. Paris had a stroke of genius for the 1960 session which had him singing Ira Gershwins lyrics to songs other than his brothers. The hard hitting orchestra includes Roy Haynes/dr, George Duvivier/b and Joe Wilder/tp, and Paris sears through a torrid Girl of the Moment while delivering a definitively delicate and romantic Long Ago And Far Away. He possessed a vulnerable flutter in his voice that teetered between vibrato and hear-throb, milking it for all he can on This is New.

The 1962 date includes a jam with Hank Jones/p along with Duvivier and Haynes, while Pairs plays some hip guitar on Thads Blues and puts his heart on his sleeve on Tonight while playing it cool on Cherry. The orchestras snap and sizzle behind Paris on a smoking Dukes Place and the definitive version by ANYONE of Tis Autumn is delivered to your front porch, along with a haunting read of Jenny.

I guarantee that if youre a vocals fan, and you buy these sessions, youre going to ask Where has this guy been?!? Youll also end up searching for everything hes done. Maybe not now, maybe not tomorrow, but some day. Heres looking at you, kid."

"Jackie Paris was a talented singer with a flexible style (he died in 2004 when he was 73). He was specifically a jazz singer, one-time friend of Charlie Parker who worked with Charlie Mingus's band for a few months in the 60s, and, in the old cliché, never got the recognition he deserved. I did my best for him having him on two BBC radio programmes with his former wife, the fascinating jazz singer Anne Marie Moss. Last time I spoke to Anne Marie she was teaching voice at the Manhattan School Of Music.

Jackie was, as Jordi Pujol remarks in his liner “the best jazz singer that never happened”. I first heard Jackie singing with Bill Harris and Chubby Jackson in a big band. He was consistent throughout his career but with The Song Is Paris album (which begins at Duke's Place) being probably his finest.

The album of Gershwin's lyrics has a dozen good and unhackneyed songs, and it's very pleasant but inhibited by some unimaginative arrangements by pianist Joseph. It's irrelevant that the backing includes people like Joe Wilder, Charlie Shavers, Eddie Costa, Barry Galbraith and Roy Haynes because they don't have anything interesting to do.

The second album is a different matter. Again the material is fresh, Bobby Scott's arrangements are superior and this time Jackie swings happily with the band. The album culminates with a small-group set in which he revels in the backing of Hank Jones and company and also shows his talents as a guitarist. I know that he thought this was his finest hour, and I think that he was probably right."

-Sings the Lyrics of Ira Gershwin

"Jackie Paris' smart, hip vocals prove a perfect match for Ira Gershwin's smart, hip lyrics on this wonderful session, which boasts an appealing warmth and intimacy underneath its cool exterior. Paired with musical director Irving Joseph as well as Phil Bodner on flute and sax, Joe Wilder on trumpet, Barry Galbraith on guitar, Eddie Costa on vibes, and Roy Haynes on drums, Paris delivers some of his jazziest and most thoughtful performances, clearly relishing the opportunity to tackle material as eloquent as "Let's Take a Walk Around the Block," "That Moment of Moments," and "Long Ago (And Far Away)." The subtlety of his approach dovetails perfectly with the common-man appeal of the Gershwin songbook , and the album's steadfast refusal to bow to melodrama or theatricality is essential to its success."

-The Song Is Paris

"The Song Is Paris pairs Jackie Paris with arranger Bobby Scott, whose simple but effective treatments prove well-matched to the singer's uncommonly direct approach. Because he was never a showy or self-indulgent vocalist, Paris never received the acclaim he deserved, and the subtlety of a record like The Song Is Paris further underlines just how deceptive his music can be -the album shifts so effortlessly between moods and tempos that its broad range threatens to pass by virtually unnoticed. Paris' nuanced, succinct approach to the material likewise eschews technical acrobatics in favor of sincerity and poignancy -slowly but surely, the songs work their way deep under your skin."

Both by Jason Ankeny -All Music Guide