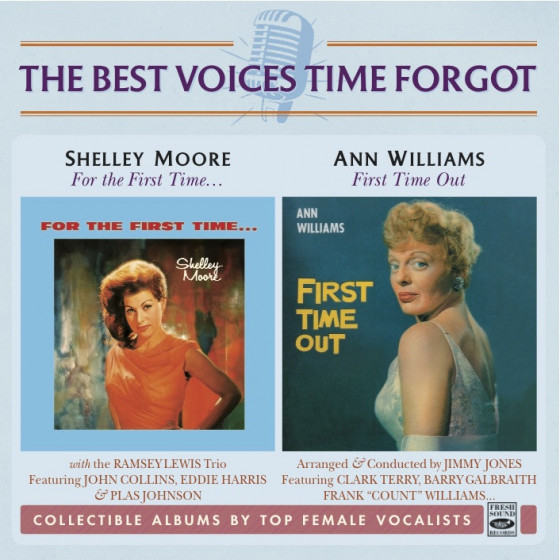 For the First Time...
The enchanting Shelley Moore was an English vocalist with a firm orientation towards jazz, and some rare, unquestionably appealing qualities as a singer. She was born in Essex, England, and through the 1950s she performed in nightclubs, for the American troops, and on British television and radio, which led to several singles. After touring the US with English bandleader Vic Lewis, she began singing with the Ray McKinley band, to move to the states formally in 1960. It only took a year for Ms. Moore to record her first album in Los Angeles—"For the First Time." Vocally, the album showcases her light, almost wistful quality, while instrumentally, the merit lies in the Ramsey Lewis group fitting Shelley Moore’s bent admirably, as well as in the individual instrumental performances, all of uniform quality.

First Time Out
Ann Williams (1928-2007) was a supper-club singer whose vocal talent enabled her to blend equally well jazz and pop repertoire. In 1960 she recorded her only album "First Time Out," where she sings cleanly and her diction and phrasing were precise, demonstrating as well a good range and a comfortable posture at either up or slow tempo. Jimmy Jones’ arrangements are very good ones of their type. They never get in the way of Miss Williams and give her attractive and airy backgrounds with some particularly good solo spots from Clark Terry, Frank Williams, Barry Galbraith and Seldon Powell.


Personnel on “For the First Time...”:
Shelley Moore, vocals
Accompanied by the Ramsey Lewis Trio


Personnel on “First Time Out”:
Ann Williams, vocals
With Orchestra arranged and conducted by Jimmy Jones

"Both singers presented here are on the boundary between jazz and pop. The one perhaps closest to jazz will have older UK fans digging into their memories of the Vic Lewis orchestra. This is Shelley Moore (c.1932-2016), who sang with Lewis in the 1950s, going with him to America on a tour that took his version of Stan Kenton’s music back to where it came from.

Moore remained in America, singing for a while with Ray McKinley, then settling there at the end of the decade. Almost at once, she made For The First Time, but in 1963 bowed out in order to raise a family. She made a comeback in the late 1970s, singing mainly in Southern California’s clubland and recording again in the early 1990s.

Moore’s voice is soft and gentle with good diction and phrasing whether on ballads, such as For The First Time and Twilight, or uptempo numbers like I Want To Be Happy. Here and there is a subtle Latin touch, for example on I Hadn’t Anyone Till You. A light and carefree atmosphere is evident throughout the session and there are good solo spots from pianist, flautist and tenor saxophonist.

After studying classical piano, Ann Williams (1928-2007) began singing professionally soon after her 1949 marriage. For a decade she sang in clubs, often in New York City, and in 1960 made First Time Out. Apart from a few singles, this album appears to be her only recording. In later life, Williams lived in Southern California and was active there on the local jazz scene, although not as a performer.

Her vocal sound is clear and she brings to the lyrics awareness and understanding of the emotional content. The accompaniment has three different groups all led by Jimmy Jones, who also wrote the arrangements. Recorded at three sessions during the same week (tracks not appearing chronologically), the bands are small groups, on one date expanded with a four-piece string section. The instrumentalists, like Williams, perform with engaging crispness although solos are few. As the series title tells us, time has forgotten these two singers and this is an attractive reminder of their talent."

Shelley Moore has a range from Blossom Dearie to confident soul on this 1961 session that includes Ramsey Lewis on piano, along with guitarist John Collins, tenor saxist Eddie Harris and Plas Johnson on tenor and flute. Interested yet? With Johnson on flute, she is relaxed like Miss Christy on “For The First Time” and feathery for “Summer Love”. Harris’ smoky tenor gallops with her on the swift “I Want To Be Happy” and is bluesy with Collins on the stark and passionate “The Thrill Is Gone”. Lewis is the perfect accompanist, slinky on the sensuoius “Son In Love’ and rockish on the rhumba’d “I Hadn’t Anyone But You.” Who let her get away?

Ann Williams is backed by a Jimmy Jones orchestra that includes Clark Terry/tp-fgh, Barry Galbraith/g, George Duvivier-Milt Hinton/b and Osie Johnson/dr for this New York City session from 1961. At times, the support sounds like vintage George Shearing as her husky voice joins with Terry’s squeezed tones on “Serenade In Blue” and the muted “When The Sun Comes Out”. She’s in a warm voice on the bluesy “The World Doesn’t Care” and noirish for the nocturne “You And Your Lullaby”. The soft strings create a misty mood for “Now You’re Leaving Me” and the team is hip while bouncing to “I Wish You Love”. Classy!"