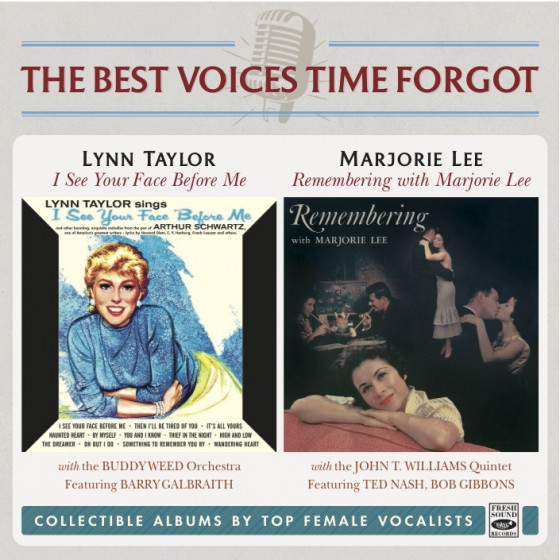 Lynn Taylor (1937-1979) was a warm, unaffected pop singer with a feeling for jazz and a sense for the lyrics. She phrased every line with delicacy and intelligence, all while projecting them in a warm, breathy style. She was originally discovered by Walter Winchell while at the Composer Room in New York, an activity she combined with appearances in other leading Manhattan clubs as well as in commercial radio and television. In 1957 she recorded "I See Your Face Before Me," an album of haunting, exquisite melodies from the pen of Arthur Schwartz, most of them with origins in his many successful musical comedies. Buddy Weed’s delicate piano fill-ins and imaginative arrangements permeate all the songs, while Lynn supplies them with a sort of intimacy seldom heard in stage show renditions and which proves most alluring. You are bound to enjoy Lynn’s performances, which transmit her musicianly feeling for jazz with poise and assurance.

Marjorie Lee was born in New Jersey, and after starting as a vocalist in 1942, she was associated with an array of outstanding orchestras, including those of Richard Himber, Joe Reichman, and Russ Morgan. In the summer of 1945, she recorded her first sides with Russ Morgan for Decca, and then followed him to be one of the band’s vocalists at the Biltmore Bowl in Los Angeles a year later. In 1948 we find her singing with Dave Rose and his orchestra on several episodes of the Red Skelton Radio Show. She devoted some years exclusively to her family after marrying drummer Bernie Halpert, but in 1957 she made a comeback to the scene with the album "Remembering With Marjorie Lee." On these recordings, Marjorie Lee shows her fresh, melodic voice, and her emotional investment in every performance, how she was always mindful of the lyrics in each song, while the arrangements handed by a then-young John T. Williams are consistently artistic and subtle.


Personnel on "I See Your Face Before Me":

"A singer whose repertoire and style was mostly suited to the pop music of the day, Lynn Taylor (1937-1979) worked for a while in New York City where she encountered composer Arthur Schwartz and it is his music (with various lyricists) that she sings in this session from the mid-1950s.

Whether singing ballads or bouncier songs, Taylor has a happy sound that blends well with Schwartz’s melodies. The singer’s accompanists are relaxed with several short solos by Buddy Weed, the horns being a discreet presence. Taylor’s last four tracks, which are not Schwartz’s compositions, come from an album entitled Ernie Kovacs Presents… Buddy Weed And Introduces… Lynn Taylor.

In 1962, Taylor became a member of folk trio The Rooftop Singers although her tenure with the group was brief and in 1963 she moved to California where she remained for the rest of her short life.

Starting her professional career in the early 1940s, Marjorie Lee sang with the orchestras of Richard Himber, Joe Reichman, and Russ Morgan. She appeared on radio with Himber in 1942 and had a successful 1945 recording with Morgan of Remember When. Later she sang with David Rose, whose orchestra was on Red Skelton’s television show for several years from the early 1950s.

Lee was probably on screen often although IMDB lists only one show, in 1953, in which she appears. After a short spell off the scene raising a family with husband Bernie Halpert, a drummer, she returned to music with the album heard here.

Singing a selection of mainly well-known songs, Lee has a vocal sound that is clear and uncluttered and here and there slightly torchy. Lee sings on only eight of the 12 tracks from this session, her accompanists an effective jazz quintet. Of the other four songs, two are features for alto saxophonist Ted Nash (I Let A Song Go Out Of My Heart and Something To Live For) and two feature pianist John T. Williams, One Love and Our Waltz. Elsewhere, Williams is a subtly persuasive accompanist, notably on Maybe You’ll Be There and Alone Together.

This release is in Fresh Sound’s growing series The Best Voices Time Forgot, which recalls singers often touching on jazz, and this is another pair worthy of attention."

Lynn Taylor (1937-1979) had a fairly short life and career, making you wonder what could have happened if she had lasted longer. This 1956-1957 session has her interpreting tunes by the famed composer Arthur Schwartz, accompanied by pianist Buddy Weed’s Septet that included Billy Butterfield/tp and Barry Galbraith/g. Taylor wisps through the bluesy “I See Your Face Before Me” and is cozy by the fire with Stanley Webb’s flute on “Then I’ll Be Tired Of You.” Her sensual reading of “Something To Remember You By” and relaxed “The Dreamer” is relaxed and intimate, with rich vibrato from Bob Alexander’s trombone on “Oh But I Do”. She saunters with confidence for “Wandering Heart For Miss Sterling” and draws you in for the kill on “Warm Kiss and Cold Heart”. Pretty and poised.

Marjorie Lee never made it too big, however she did a stint with Russ Morgan’s orchestra back in th e day before teaming up with John T. Williams’ Quintet for this 1957 Hollywood Session. She had the pick of the studio litter, featuring the luscious alto sax of Ted Nash, who swoons like Johnny Hodges on “I Let A Song Go Out Of My Heart” “Something To Live For” and “I Got It ad And That Ain’t Good.” Lee carries a torch on the swaying “Boulevard of Broken Dreams” and leans against the lamppost with her vibrato on “These Foolish Things”. Williams throws in a dash of Art Tatum on “Alone Together” and swings easy on “One Love” and Our Waltz”. Lee and Williams step into the shadows on an expressive “Good For Nothing Joe”  and are laconic on a dreamy “Maybe You’ll Be There.” She’ll grab your attention."