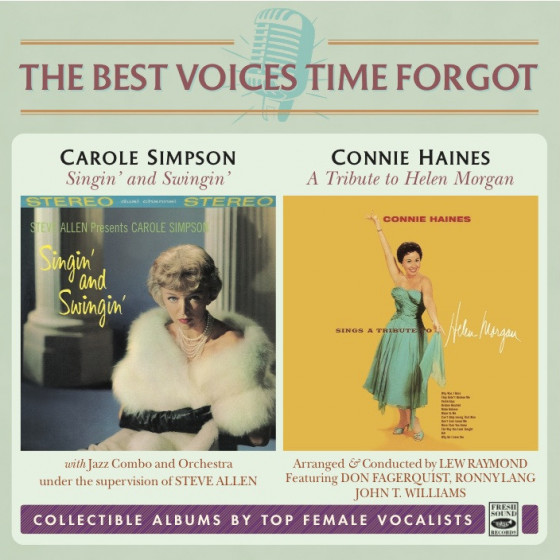 Singin' and Swingin'
Carole Simpson (1928-2013) born in Anna, Illinois, began piano lessons at five, voice lessons at twelve. She started as a piano cocktail single at Hotel Wisconsin in Milwaukee, until she joined Billy May’s band as a featured vocalist in 1952-1954. Then came several long and sometimes weary years of clubbing it around the country, New York, Chicago, Las Vegas, never truly deciding whether she preferred singing or playing piano. Eventually, Tutti Camarata heard Carole sing and brought her to the attention of Dave Cavanaugh at Capitol Records, who recorded her first album in the summer of 1957—“All About Carol.” After listening to the album, Steve Allen booked her for his TV show, and in 1960, as soon as he knew Carol’s contract with Capitol was over, invited her to record her second LP, “Singin' and Swingin'” issued on the Tops label. Carole’s feeling for jazz and knowledge of music is obvious here. Her projection of the lyrics is excellent, her sound is most pleasant, and her sense of rhythm sure.

A Tribute to Helen Morgan
Connie Haines (1920-2008) was initiated into show business at the age of four when she made her debut on radio. At ten she had her own popular commercial radio show in Jacksonville, Florida. By the time she turned fourteen, Connie became the youngest headliner ever to play the Roxy Theater in New York. Her late teens included stints with Harry James’ orchestra, and later the renowned Tommy Dorsey aggregation of the early Forties. When this young, dynamic singer finally decided to venture alone, she got her own coast-to-coast radio program, appeared in some of the best shows, and sang in the most glamorous of the nation’s supper spots, theaters and hotels. Still, and despite numerous record hits, “A Tribute to Helen Morgan” was her first LP. You’d be hard-pressed to find a more cheerful, sunnier personality than hers, or a better candidate to render this tribute, though, and with the melodies that Helen made famous, the voice of Connie Haines.


Personnel on “Singin' and Swingin'”:

Carole Simpson, vocals
With Jazz Combo and Orchestra under the supervision of Steve Allen


Personnel on “A Tribute to Helen Morgan”:

"Carole Simpson, who died in 2012, had an intimate quality with a lyric that recalls Jeri Southern, Chris Connor and June Christy. Although she doesn’t play here she also had a reputation as a very fine pianist with an encyclopaedic knowledge of the songbook repertoire. She sang with the Billy May orchestra in 1950 which led to considerable club work as a single. She impressed Tutti Camarata who recommended her to Dave Cavanaugh at Capitol Records which led to her first album All About Carole in 1957.

On this CD she performs a selection of Steve Allen originals but it has to be said that she deserved better material than this. The high points are This Could Be The Start Of Something Big, which was the theme song for Allen’s NBC talk show, and Oh What A Night For Love, which has been recorded by Ella Fitzgerald, Mel Tormé and Frances Wayne.

Connie Haines is quite different to the performers usually featured in The Best Voices Time Forgot, Jordi Pujol’s CD series about forgotten singers, because she was a well-known artist with a very impressive resumé. She worked extensively with Harry James, Tommy Dorsey (often together with Frank Sinatra, Jo Stafford and the Pied Pipers) and Tex Beneke.

Her 1957 Tribute To Helen Morgan could not have been better timed, because the following year Warner Brothers released The Helen Morgan Story starring Ann Blyth and Paul Newman. Her emotional interpretations of classic torch songs such as They Didn’t Believe Me, Yesterdays and Can’t Help Loving That Man are worthy of a Doris Day. Elsewhere she creates a gentle swing on Broken Hearted and Mean To Me that occasionally brings Kay Starr to mind. The album also benefits from some tasty Don Fagerquist on They Didn’t Believe Me, Broken Hearted and Mean To Me."

Carole Simpson (1928-2013) was one time the vocalist for Billy May’s band, so you know she knows how to belt it out. She sounds a bit like Chris Connor and June Christy on this 1960 Hollywood session under the supervision of TV-move star Steve Allen. All of the songs are from Allen’s pen, including the Mel Torme co written “When You Get TO Frisco” that has Simpson in a confident swagger. Allen’s popular “This Could Be The Start of Something Big” is features some swinging clarinet as well, while Simpson’s gentle vibrato sparkles on the late night “And Now Goodbye”. The horns get Ellingtonian on “Bluesville” and the brassy “What Kind Of Fool” with Simpson completely in control, while she’s coy and intimate on “Spring In Maine”. She’s got the feeling.

Connie Haines is just about the only one here on this latest collection who was with a popular band for any length of time, being the featured canary with Tommy Dorsey and Harry James, sharing the mic with Frank Sinatra. This 1957 album has her giving tribute to the famed show singer Helen Morgan, backed by an orchestra that included Don Fagerquist/tp, Howard Roberts/g, Mel Lewis/dr and Buddy Clark/b. Like the Swing Era pro that she is, she’s clear and expressive on the romantic “They Didn’t Believe Me” and able to coo like a pigeon on the tender “Make Believer”. On material by Jerome Kern, she makes the birds fly on “Can’t Help Lovin’ That Man” and gives a gorgeous aria with pianist John T. Williams on “Bill”  Timeless treasures."