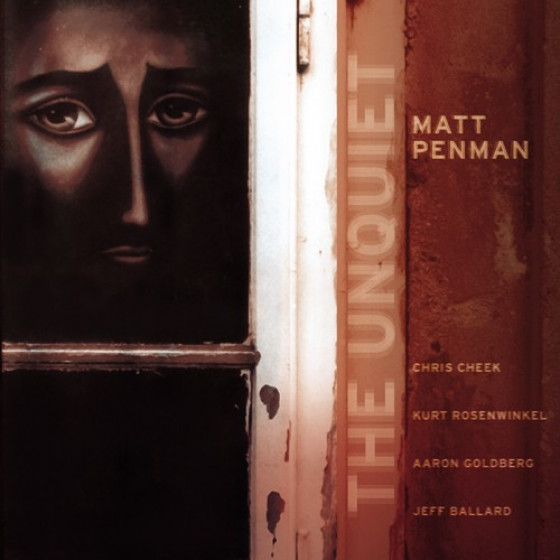 The Unquiet is a collection of compelling original pieces from the pen of bassist Matt Penman. This intriguingly-layered debut album for the Fresh Sound New Talent label features the cream of the New York underground jazz scene: Kurt Rosenwinkels skilled, yet subtle guitar harmonies are complemeted by Chris Cheeks striking saxophone work and supported rhythmically by Aaron Goldbergs steady piano and Jeff Ballards expert beat. With inspired compositions and vital playing, Penman has managed to form a unique band sound for The Unquiet of soaring unity as these five capable men bring light through music to a post-9/11 world.

"Either Matt Penman wrote his own bio or paid a comedian friend (who knows a thing or two about the jazz world) to write it for him. It contains the following gems that lend humorous light to the how and why he eventually grew up to be a beautifully introspective, reflective composer, to wit: "The introduction by an insistent school teacher of Jazz music into the mix was of course life-altering, as now there was a legitimate reason to not talk to anybody", and, in blithe synopsis, "All these ingredients manifested themselves in Matt's composing, an addictive and tortuous habit that won't go away."

All humor aside, the kid can compose-and play. I say he "stays in the picture". Evidently, his cohorts, another "All-star" team of players from the Fresh Sound New Talent pool agree, since investigation into the label's philosophy will reveal, that from the top down, executives and players alike aren't exactly in it for the payday. The extraordinary Kurt Rosenwinkel is here, and his limitless capacities as a group member, including his mastery of every facet of the improvisatory idiom, from sensitive accompaniment to sheer chops- busting abandon, is on full display for fans impatiently waiting for his next offering from Verve. Luckily, Kurt has Fresh Sounds and they have him-a guy this good needs extra creative outlets, and a label this good needs some marquee name recognition. Rosenwinkel fans should also take note of his three other recent FSNT appearances: Chris Cheek's "Vine", Rebecca Martin's Middlehope and Kris Bauman's debut recording. Likewise, laudable pianist Aaron Goldberg, who has a couple of solo cds out on JCurve records, can be found on a few noteworthy sideman appearances on FSNT, including the one turned in here as well as the new John Ellis and OAM trio discs.

Back to Penman, who already had a 1994 nomination for New Zealand Jazz Album of the Year prior to heading to Berklee and then, New York, in 1995. Since then he's brought his lyrical, woody, booming sound to projects by Cheek, Rosenwinkel, Nils Wogram, Sam Yahel , Kenny Werner, Wolfgang Muthspiel, Nneena Freelon, David Berkman and Mika Pohjola. All these experiences came to a head in Brooklyn in late 2001 with the recording of this disc.

"Up and Over" sets the tone right away- swinging, elegant, small group post bop, with guitar and piano chording in unison with Cheek's single note versing of the spacious intro to the head and the leader's simultaneous roots locking down the groove, all while Ballard paints the remaining spectrum with percolating kit hits. Then, Kurt and Chris play the theme in unison before the guitar takes off a bit over a Ballard breakdown , only to return to the theme, then back out through the intro section, then soloing over a straight 4:4 section. Throughout , Ballard peppers with rhythmic variation upon variation, from calypso-type to New Orleans marching-type beats and fills. Note Penman's classic walking tone as he buoys up Cheek's classic- toned and idea-filled take on 64 bars or so. Apparently the only sax player on FSNT to not have won one of the Monk competitions, Chris is a nevertheless gorgeous tone-meister capable of invoking and evoking colors as diverse as Coltrane to Getz while emphasizing the melodic end of the improvisational spectrum. Next up is Aaron Goldberg and unfortunately, the first thing the listener notices here are his particularly tortuous vocal Jarrettisms, which should have fallen victim to the ProTools delete button. Thankfully, his cascading volleys of tasteful acoustic lines, laced with gorgeous motific mastery, did not. Like all the releases on the FSNT imprint, here comes that vibe again. I can't explain it adequately, but it's a small group aesthetic that seems to arise out of the traditions of those straight-ahead Impulse and Fantasy dates mixed with a great respect for the lovely, laid back, highly arranged quality that permeated classic West Coast jazz.

"Treehugger" is a pretty jazz waltz characterized by Goldberg's accomplished Rhodes playing, which emphasizes the purest, angelic tones of the instrument to evoke a flitting mood of movement throughout the piece. It also happens to feature Penman's only solo on the record, an unrequired self-imposition, given his sophisticated lines, full-bodied, round, classic, buttery tone and idea-filled economy of concept. But what else can you do when players like Rosenwinkel and Goldberg are there to fill up the rest of the song with masterful turns and Cheek is there to ride you out, with each again emphasizing motific development, yielding nothing short of tunes within a tune.

The lack of solos indicates that Penman prefers to play the rhythm section role and lead by craft-filled, compositional example (funny how the "Penman" indeed lets his Pen do the talking-while he does the walking!). I particularly enjoyed "Keepsake" which features some incredibly interesting and big-sounding quartal-harmony-type chordal work from Rosenwinkel on the intro. It's another beautiful mood-setter in 6 that transported me to West Coast Highway 1, complete with reverb-drenched descending sun showers from Rosenwinkel, a note-laden breathy excursion from Cheek and an equally air-laden Rhodes trip from Goldberg. By the time Rosenwinkel adds line upon line of sometimes pinched off phrases, replete with his characteristic, but distant, unison scatting, you'll be fully blissed out and relaxed, while still getting your full measure of swing, with no lack of compositional stimuli-nicely done, as are the rest of the pieces herein.

This young composer and his band of new veterans have shaped another gemstone in the FSNT treasure trove of new (and old) releases, one that should, with any luck, land young Matt Penman on the short list of "new artist of the year".

- Phil DiPietro, All About Jazz

"Since leaving his native New Zealand for studies at Berkelee, bassist Matt Penman, now based in New York, has busied himself becoming established as one of the go-to sidemen among the young guns of the NYC jazz underground and on international festival stages. Although he's recorded widely, and is part of the house crew for the Fresh Sound/New Talent label, this is is first release as a leader. Drawing on the talents of a quintet largely drawn from FS/NT artist he's previously recorded with, he's written a batch of material that's as impressive as the players he assembled for the project.

Best known among those players is guitarist Kurt Rosenwinkel, who keeps busy on FS/NT projects between his Verve releases. Chris Cheek featured Penman on his latest release, and returns the favor with outstanding performances on tenor and soprano sax. Aaron Golberg performs on both acoustic piano and Fender Rhodes, and the lineup is completed by drummer Jeff Ballard. It's an all star team of young musicians, names destined to show up in the upper reaches of jazz polls for years to come, who deliver in a manner that should reassure anyone who worries about the future of jazz.

As a composer, Penman avoids the temptation to write material that makes his bass a central focus, preferring to subordinate himself to the rhythm role of which he is a master. Actually, that may overstate the case, because while his contribution is largely supportive, it's also indispensable. Still, he lets the primary focus fall on Cheek, Rosenwinkel and Goldberg, and none of them disappoint. All three have ample command of the improvisational potential of their respective instruments, and Penman has provided excellent compositional frameworks for the display of their talents.

This is an terrific contemporary outing, respecting the jazz tradition while pointing toward the jazz future."