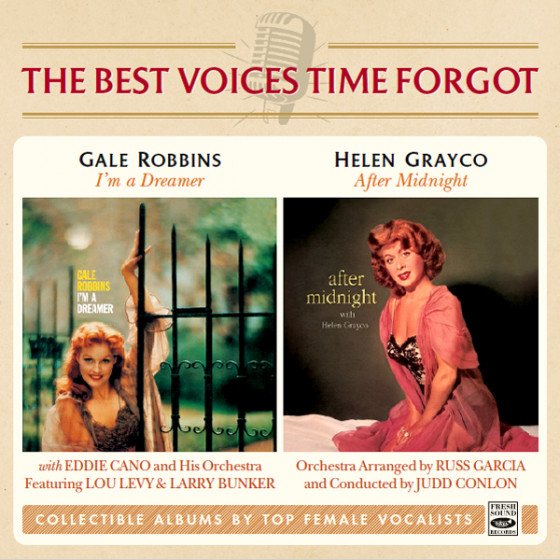 I'm A Dreamer
American actress and singer Betty Gale Robbins (1921-1980) climbed the ladder to stardom as a model first. Then she proceeded to do it all over again as a singer in Chicago, with the bands of Phil Levant, Jan Garber, Ben Bernie, and Hal Kemp, but also with appearances on radio and TV. During World War II she also attained nationwide fame as a pin-up girl, but the final jump in her career was to the big screen, when she became a Hollywood star during the post-war years. “People always are so terribly surprised to find out I’m a professional singer,” she complained. “They think of me as an actress. But if I sang more, Hollywood wouldn’t give me a chance to act. It’s this stupid typecasting thing.” In 1958, her fame afforded her the chance to record an album for Vik with the Eddie Cano Orchestra titled "I’m A Dreamer." With a versatile set of arrangements by Cano, Gale Robbins projected her sultry and sophisticated approach to a repertoire of familiar standards that shine thanks to her intimate knowledge of the melodies. Gale Robbins stepped away from the spotlight in the 60s, but still today you can find her star at 6510 Hollywood Boulevard, on the Hollywood Walk of Fame.

After Midnight
Helen Grayco (1924-) started her career as a singer when she was 8, on KHJ Radio in L.A. Her first break came at 17. Stan Kenton needed a vocalist, Helen tried out, landed the job, and she started touring with the band. Subsequently she sang with several bands before she was hired by Spike Jones and his City Slickers. Helen’s songs became a soothing contrast to the tumultuous musical buffooneries of the Slickers. She married Jones in 1948, and their relationship was as successful in private as it was under the glare of the spotlight. After her name came to be associated with the Slickers though, Helen was known in the trade as one of the most under-rated singers in the country, perhaps because critics had a hard time taking anyone in the Spike Jones entourage seriously. So at Spike’s urging, in 1955 Helen began to sing on her own. Her debut as a single act was a smash hit. She had a distinctive touch for torch tunes and slow ballads, and her sensuous, husky singing style together with the sleek, fascinating gowns she wore,  finally brought her critical acclaim. In 1957 she recorded her album "After Midnight," adequate evidence of the talent she always possessed.

Personnel on "I’m a Dreamer":
Gale Robbins, vocals, with Eddie Cano and His Orchestra

"The Gale Robbins-Helen Grayco combo is interesting in that both ladies actually made names for themselves outside the music world. Robbins actually  has a star on the Hollywood Walk of Fame for her many film roles, and she was a model to boot! This 1957 session has her backed by some of LA’s finest including Bob Cooper/ts, Lou Levy/p, Tommy Tedesco/g, Buddy Clark/b, Larry Bunker/vibes, Mel Lewis/dr, Med Flory/as and Dave Pell/ts on some sassy takes of “What Is This Thing Called Love?” and a big bold “They Can't Take That Away From Me”. She acts out her roles well as she walks through the dark reeds of “Gold Earrings” and sounds like a  pinup girl on an R&Bish “Ain't Misbehavin'”. Sing to me, baby!

Helen Grayco did stints with both Stan Kenton and Spike Jones (actually marrying him!) , in order to give you a hint of her versatility. She’s got a rich, blue and husky sound, perfect for late night torch tunes, and this 1957 session with Gerald Wiggins/p, Larry  Bunker/vibe, Barney Kessel/g, Joe Mondragan/b, Alvin Stoller/dr, Les Robinson/as and a string sections shows what she can deliver. She’s intimate on “Take Me In Your Arms” and swoons with Robinson on “Mood Indigo”. Clear and penetrating, she works well with Wiggins on “While We're Young” and “Every Time We Say Goodbye” and goes dark with Mondragon on “Black Coffee” and “You Don't Know What Love Is”. This lady has a left hook!"