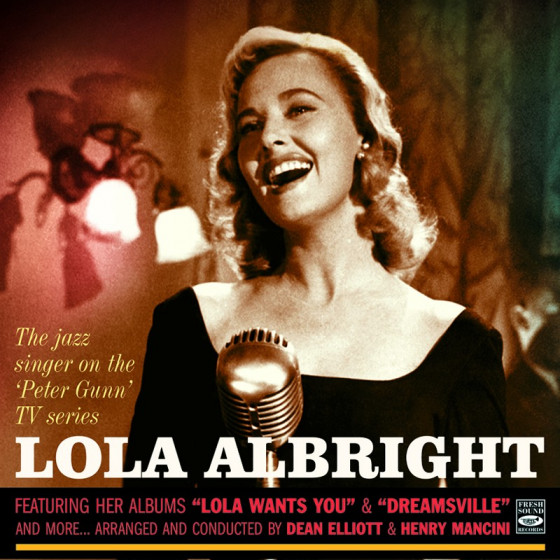 Once rather dismissively regarded as one of the few blondes in Hollywood whose hair was its own natural color, the glamorous actress Lola Albright (1924-2017) had a chequered movie career until her definitive big break arrived in 1958. That was when she was cast as the sophisticated night-club singer in NBC’s newest television hit, the detective thriller “Peter Gunn,” which aired from 1958 to 1961. The role made her a personality in her own right.

She said that Blake Edwards, the creator-producer-director of the series, had her in mind from the outset. “But,” she added, “he had no idea I could sing. I had just recorded my first album.” That was “Lola Wants You” on the Kem label, on which she sang a dozen standards and originals with her husky, sexy voice, treating them with the intimate approach required by the arrangements conceived and conducted by Dean Elliott.

In February 1959, she recorded her second album, titled “Dreamsville,” this time for Columbia and surrounded by some excellent West Coast jazzmen under the direction of Henry Mancini. Her voice, pleasant as always, carried a group of jazz-flavored standards and six Mancini originals from the already-famed Peter Gunn score, in a pervasive and smoky jazz atmosphere. And that was that. Always independentminded, she subsequently pursued a widely-varied career in film and television until, tiring of the spotlight, she withdrew from public life in the 1970s.

Personnel on "Lola Wants You":
Lola Albright with Orchestra Arranged and Conducted by Dean Elliott

Personnel on "Dreamsville":
Lola Albright with Orchestra Arranged and Conducted by Henry Mancini

Personnel on Bonus Tracks:
Lola Albright sings on the ‘Peter Gunn’ TV series (1958-1961)
Music under the direction of Henry Mancini

"Lola Albright was an actress who had toiled in relative obscurity before she was cast as the nightclub singer in the hit television series Peter Gunn. Prior to that casting, in 1957 she had, at the urging of a friend named Dean Elliott, who was a composer for films and television, made a vocal album titled Lola Wants You, with Elliott supplying the arrangements and leading the band. Subsequently, she made a 1959 album, Dreamsville, with an orchestra conducted by Henry Mancini, the man who wrote the original music for Peter Gunn. Both of these albums, along with eight tracks taken from the Peter Gunn series, are compiled on The Jazz Singer on the “Peter Gunn ” TV Series (FSRCD 930).

Albright had a pleasing voice, and put the songs across effectively. The recordings were made with first-call Los Angeles players, so the accompaniment is terrific. The songs on the first album are in keeping with the Lola Wants You title, songs with a come hither message. The album with Mancini mixed standards like “Two Sleepy People,’ “You’re Driving Me Crazy” and “It’s Always You,” with tunes written for the score from Peter Gunn with lyrics added by either Sammy Cahn or the team of Jerry Livingston and Ray Evans, including the title track from the album.

The tracks from the Peter Gunn series are all standards except for “Straight to Baby,” an original that Mancini composed for the television series, with lyrics by Livingston and Evans. Albright’s vocal output is limited, but what she did was well performed and appealing as you can hear on this collection."

"It’s simply amazing how many vocalists Fresh Sound Records finds and re-introduces to today’s ears that I’ve never heard of.

Lola Albright (1924-2017) was better known as a blond beauty actress on shows like “Peter Gunn” (on which she also sang), but these sessions from 57-61 showed that she knew how to carry a tune as well. Her voice has that vintage playful and “come hither” twinkle in the eye, and in the hands of orchestras lead by Dean Elliot and Henry Mancini, she writes “for a good time, call…” on cozy pieces like the coy “Candy” and slinky “Put Your Arms Around Me.” She shows a little vocal leg on the playful “All of You” and whispers in your ear on “Brief and Breezy,” while oozing with temptation on “Dreamsville.” She runs her fingers through your hair on “Slow and Easy” while leans back in the passenger seat on “Just You, Just Me.” The songs from “Peter Gunn” have a TV feel to t hem, and she is more canary than chanteuse on “September in the Rain,” and “How  High The Moon,” but you might not even be paying attention after the first two albums. WHEW! Better loosen your collar, buddy! The excellent liner notes give you some background on this lady, making this a real ringer."

"Prior to her starmaking turn as a nightclub singer on the TV classic Peter Gunn, Lola Albright recorded this slight but alluring session for Kem Records. From its cheesecake cover photo to Dean Elliott's lush, melodramatic arrangements, Lola Wants You is above all a tribute to the perennial salability of sex, and an engaging one at that. Albright's kittenish vocals are undeniably effective within their narrow range, and songs like "A Man, a Man, a Man" and "There's a Man in My Life" play nicely to her strengths."

"Fans of Peter Gunn know Lola Albright as nightclub singer Edie Hart on that classic Blake Edwards TV series. This crossover album shows that Albright's considerable charm and talent were strong enough to merit her (sadly short-lived) recording career. Albright has a sexy, breathy, and jazz-inflected vocal style that is comparable to Peggy Lee and Julie London, and Henry Mancini's cool West Coast-style charts complement her low-key voice perfectly. One of the real pleasures of this album is hearing the vocal versions to so many of the songs from Mancini's hugely successful Peter Gunn instrumental album mixed in with the usual supper-club suspects. With the noted exception of the title track, none of these Mancini vocal versions went on to become widely recorded, which is probably explained by their beatnik eccentricity (molded to fit the black-turtleneck, bongos, and espresso style of Mancini's music). The most eccentric of these is saved for last, as Sammy Cahn's lyric for "Sorta Blue" casts Albright as a depressive cooing about how her melancholia is so deep that even booze and drugs can't lift her dashed spirits. This album is a time capsule for sure, but it's a great one and it deserves a CD reissue, just as Lola Albright's acting career merits a second look."