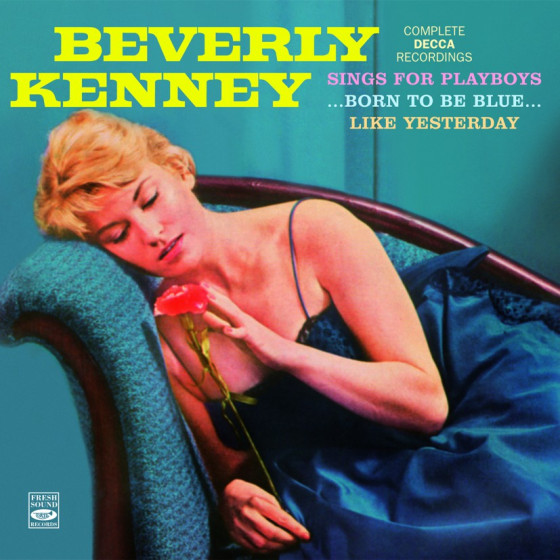 And many more from his SESAC recordings and TV broadcasts

Over fifty years after her death, singer Beverly Kenney (1932-1960) remains a cult figure for her fans around the world. Her career was tragically briefshe took her own life when she was 28. She possessed a sweet, child-like vocal quality and a nuanced, pleasant jazz-styled phrasing that won her favour with both pop and jazz audiences.

On these outstanding Decca sides, recorded few years before her death, she displays the smooth, smart and bittersweet touch that defined her personal style.

In addition to the fine small group performances with front-rank jazzmen and orchestral settings with Ralph Burns and Hal Mooney, this set also includes all the sides she recorded with the Eddie Safranski orchestra for the Sesac publishing and record label. All the critical hosannahs they earned her, however, never quite translated into widespread public acceptance, due, at least in part, to the burgeoning rock & roll movement, which she loathed, even composing a song called I Hate Rock and Roll, which she performed on the Steve Allen TV show on May 18, 1958making the perfect addition to this collection.

The closer of the set is a highly valuable document, taped from a Playboy Penthouse TV show, where she is interviewed by Hugh Hefner and sings with her distinctive sophisticated phrasing and cool jazz sensibility.

Note:
CD 1 tracks 5, 12-14, and 23 were not included in the original LP configurations.
CD 2 track 28 (What Is There to Say) is a live orchestrated version from the same tune recorded for Decca and included on CD 1, track 8.

"Attention fans of vocal jazz! This review is for YOU! What Jackie Paris is to male singers, Beverly Kinney is to females. She had an incredibly individual voice all her own, recorded some incredibly moving music, never quite got to the top tier, and, suddenly, just like that (in her case because of suicide) had a career that was abruptly cut off from the music scene. This pair of 2-CD sets (FSRCD 720 & FSRCD 721) covers everything youll want, and make you scrounge around for anything else that might be out there.

The Decca recordings follows the same format, with the music sounding just a tad more formal. Kenny is accompanied by Ellis Larkins/p and Joe Benjamin for a 1957 intimate collection of under the radar material like A Summer Romance and A Lover Like You, as well as more familiar material such as What is There to Say and the mood is haunting all throughout. Hal Mooneys band and a small combo that includes Ed Shaghnessy/dr, Charlie Shavers/tp, Al Klink/ts and Chuck Wayne. A few bonus sessions, as well as a pair of vintage TV appearances round out this intriguing collection . She bares her soul with Larkins on Try a Little Tenderness and A Summer Romance, while takes Mel Tormes Borne to be Blue and makes it her own. She is quite playful on Tampico and Undecided and Long, Lean and Lanky is an absolute hoot. The fact that she was unappreciated during her terribly short life is a crime, and an added footnote to the line in Ecclesiastes that under the sun, all is vanity. Try to get some meaning out of it all by enjoying what she brought to us still on this side of eternity."

"Beverly Kenney was a sensitive, lyrical and individual jazz stylist who was well on her way to fame when she took her own life at the age of 28 in 1960. Sadly, she sometimes gets more attention for that than she does for her singing. Beverly Kenney: The Complete Decca Recordings is a two-CD set that captures the singer's many unique sides in a number of settings, some blatantly commercialhey, you've got to sell recordsand others in stark surroundings with accompaniment only by the superb piano of Ellis Larkins and bassist Joe Benjamin. Kenney's sound was sort of a Stacey Kent out of Joanie Sommers, little-girlish type of approach that, under the right circumstancesand knowing her tragic historycan really get to you. This one will grow on you. Particularly late at night."

"One of the most promising jazz singers to emerge in the 1950s, Beverly Kenney committed suicide in 1960 after a love affair broke up; she was just 28. In her short career, she received praise from critics but was probably fighting a losing battle against rock and roll. If she had been born ten years earlier, her renditions of superior standards may very well have made her famous. Decades after her death, she became a bit of a cult figure in Japan where all of her recordings and some previously unreleased material (including a demo session from 1954) became popular [...]

Equally skilled on swinging material and ballads, Kenney always did justice to the words that she interpreted while consistently uplifting each song. The Complete Decca Recordings, which covers 1958-60, has the albums Songs For Playboys (with pianist Ellis Larkins), Born To Be Blue (a large orchestra), and Born To Be Blue (with four different groups). Also included are obscure numbers made for the Sesac label, two cuts from a 45, her original I Hate Rock And Roll (performed on the Steve Allen Show) and four songs and a brief interview from her appearance on the television show Playboys Penthouse."