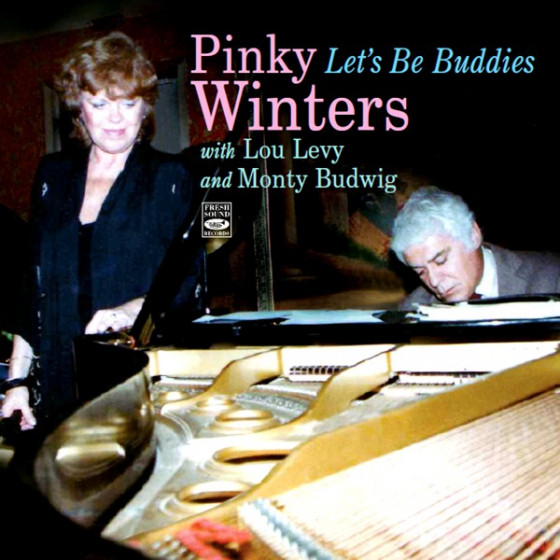 Pinky Winters is a favorite of listeners who cherish superior songs sung with fealty to the intentions of the composers and lyricists who created them. Much of her best work was done with pianist Lou Levy after the two weathered an uncomfortable first encounter and eventually became professional and personal partners.

They recorded 'Lets Be Buddies' when their musical understanding was at full flower. With Monty Budwig, one of the greatest bassists of his generation, Levy and Ms. Winters performed 14 songs by the cream of contemporary songwriters including Cole Porter, Antonio Carlos Jobim, Johnny Mandel, Hoagy Carmichael and the Gershwin brothers. Among the singers who cherished Levy as an accompanist were Frank Sinatra, Ella Fitzgerald, Sarah Vaughan and Peggy Lee. In this collection, he and Pinky Winters rival all of them in intimacy, musicality and depth of interpretation.

"Her choice, I know, but the career of Pinky Winters has not been as high profile as all who love to hear good songs well sung would like. Take this album for instance; a flawless exploration of standards from the American Songbook, it was recorded for the obscure Jacqueline label and released almost secretively and so far as I am aware never re-released until now. Three decades before this date, Winters had recorded three other albums that were similarly severely limited in their distribution. Two were on Vantage (and included jazzmen Stan Levey and Zoot Sims), one on Argo (with Gerry Wiggins and Chico Hamilton), the latter reissued on CD. Then came marriage and a family to raise and it was the end of the 1970s before Winters was back on the scene. She played highly regarded club dates in Los Angeles but the major recording companies took no heed, hence this date for an obscure (but technically proficient) label.

By this time Winters had begun working with pianist Lou Levy who became her second husband and their rapport is evident throughout this set, while Monty Budwig fits in with smooth perfection. A masterly interpreter of standards, Winters is a jazz singer of elegant poise and subtle skill; she phrases beautifully, invariably and effortlessly swinging. Although the songs are familiar, the singers interpretations renew them through her ability to make the composers music her own while imbuing the lyricists words with warmth and understanding. We are fortunate that Fresh Sound has resurrected this exceptional album, presented here with original and new liner notes. Very warmly recommended."

"A wonderful album by the vocalist PINKY WINTERS came out in the mid-1980s. It was her first recording in almost three decades, and was a welcome blessing for those select few who had been waiting during the interim for something new from this special singer. Well, it came and went. Between then and now, she has released seven albums, but only two had domestic releases. Thanks to Jordi Pujol at Fresh Sound Records, that magical album from 30 years ago, Lets Be Buddies (Fresh Sound 5501) is once again available for discerning listeners to enjoy.

Supporting Winters on this recording are the sublime accompaniment of pianist Lou Levy and bassist Monty Budwig. Her gently burnished voice lies easily on the ears of a listener. Winters has an innate sense of swing in her singing, regardless of the tempo. She presents the lyrics to the songs that she selects with respect and understanding, and oh, does she ever know how to select songs. Just go down the song list for Lets Be Buddies, and you will find one gem after another. A few like Embraceable You and I Got Rhythm, are visited often, but the balance of the program consists of prime cuts that are not totally rare, but certainly are not overdone. If someone selected a set of albums that could serve as the aural equivalents to textbooks on how to sing popular music, Lets Be Buddies should be among them. When Winters closes with My Shining Hour, the thought arose that this should have been the title of the album, but then again, any album by Pinky Winters is a shininghour.

One word can describe Lets Be Buddies, and that word is perfect!"