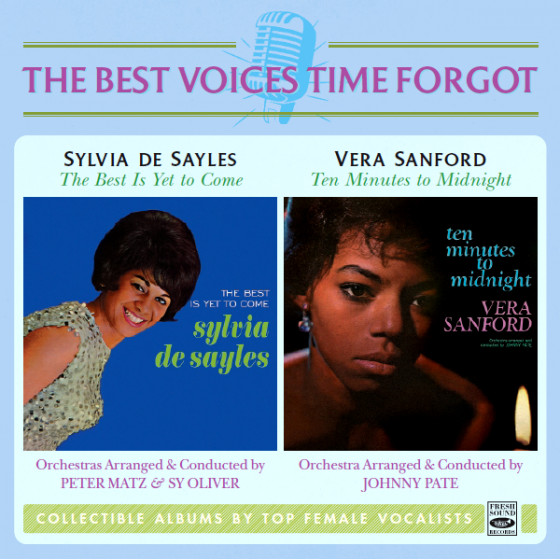 The Best is Yet to Come
In October 1963, 22 year old singer —and pianist— Sylvia De Sayles got her chance to appear at the Embers club in New York. It was a slow Sunday, the day when the regular attractions had the night off so that the club could showcase new local talent. Ralph Watkins operated both the Embers and Basin Street East, and he was so impressed by Sylvia’s performance that he extended her engagement six more Sundays. A contract with Regina Records came from her success at the Embers, as did a three-week stand at the Living Room, and a ten-day stint at Basin Street East with Duke Ellington’s orchestra. On "The Best is Yet to Come" —her album debut for Regina— Sylvia sings an elegant selection of tunes that range from the more rhythmic persuasion to the torcher variety. Thanks to her warmth, vocal charm and solid jazz feeling, Sylvia was saluted as a new Lena Horne, and enjoyed a brief but successful career in the USA, with tours of the East and Europe.

Ten Minutes to Midnight
Chicagoan Vera Sanford was 25 in 1964, when she switched careers to go from legal secretary to vocalist under the auspices of her boss, Earl Washington. He was a local trial attorney and music lover, but after listening to one of her audition discs, he decided to launch a record label (Bombay) to introduce her to the music scene. Within a few months of releasing her album "Ten Minutes to Midnight," Vera was being hailed as a new singing sensation, and when she auditioned for the NBC Johnny Carson Show in New York, bandleader Skitch Henderson, paying her the highest praise, declared: “She’s a cross between Ella Fitzgerald and Sarah Vaughan.”

Personnel on “The Best Is Yet to Come”:
Sylvia De Sayles, vocals
With Orchestras Arranged & Conducted by Peter Matz & Sy Oliver

"Sylvia De Sayles was billed as “the next Lena Horne” and you can hear why-she’s got that bright and earnest glow to her voice, well demonstrated on this album that has her backed by an orchestra conducted by swing master Sy Oliver. The 1963 NYC session displays her clear vibrato, brimming over with clear enunciation as on “I've Got  Your Number” while she goes over the top on “Wild Is Love”. The songs have a Middle of the Road pop feel, even on the darker “Don't Explain” and she shows how to dig in on a confident “The Best Is Yet To Come”. Polished like the chrome on a Caddy.

Vera Sanford got her break when her trial attorney boss heard an audition disc of hers, and turned his secretary into a recording star. This 1964 album has her backed by an orchestra conducted and arranged by Jonny Pate, with lots of  harp in support of the lush background. Sanford has a dash of Sarah Vaughan in her delivery, husky and classy on “I Can't Escape From You” and oozing over “The More I See You”. She rides through the rumble of the drums of the dramatic “Dancing In The Dark” and gets poppish on “Too Late Now”. An exotic “Shangri-La” and misty “The More I See  You” are impressive displays of a confident lady at the mic. Anything else by this walk off?"