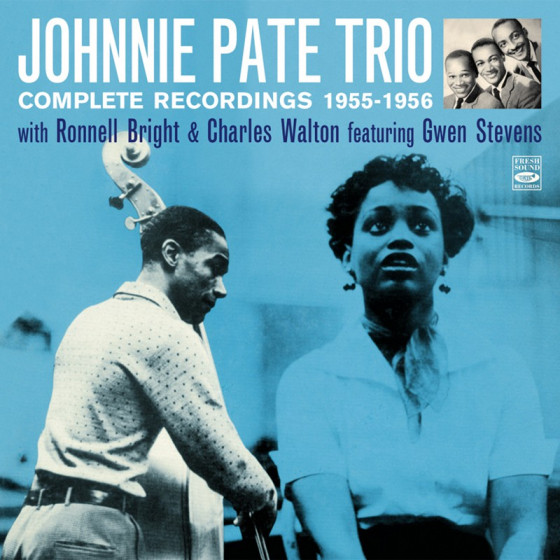 John W. Johnnie Pate (born December 5, 1923, Chicago Heights, Illinois) enjoyed a notable career as a bassist from the late 40s up until the early '60s in the Chicago area, gaining a solid reputation as a strong player in the Oscar Pettiford mold and enlightened composer. On these 1954-1956 sessions for the Talisman and Gig labels, he leads a trio featuring Ronnell Bright, who was a swift, resourceful young pianist whose style recalls the early Oscar Peterson. With drummer Charles Walton, this bright, polished and swinging trio began to be recognized while working first at the London House and then at the Blue Note, where they were the house band in 1954-1955 accompanying great singers such as Lurlean Hunter, Ella Fitzgerald, Sarah Vaughan, Audrey Morris and Carmen McRae.

With a smoothly flowing, relaxed sound, the groups aim was to combine pleasure with stimulation, and in these terms it largely succeeded. In two tracks here, vocalist Gwen Stevens contributes delightful performances of Pates pretty ballad, I Was a Fool, and Dont Worry About Me, revealing a quiet, warmly expressive voice.

Despite his considerable experience, Pate, unlike Ronnell Bright as a pianist, never received praise commensurate with his talents as a bass player, mainly because his jazz career turned too soon to a different musical direction, when in the 1960s he became a music arranger/producer and a leading figure in the Chicago soul and pop/R&B scenes.

Note about the GIG recordings:
Tracks #21-24 were recorded during a session that took place in January 28, 1956, while the album Subtle Sounds was recorded the same year, some time before summer and perhaps even during the same session.

"Bassist Johnnie Pate led this musically neat trio for several seasons at such Chicago clubs as the Streamliner, London House and Blue Note. The main focus of interest was the developing talent of pianist Ronnell Bright, who went on to work with the likes of Dizzy Gillespie, Gene Ammons, Coleman Hawkins and a flock of top vocalists including Carmen McRae, Sarah Vaughan, Lena Horne and Nancy Wilson. Bright had an attractive turn of phrase, a good touch and also blossomed as a composer, Sweet Pumpkin being his most well known tune. He later entered the Christian ministry, having gained a doctorate in divinity, and retired from professional music-making.

The Pate trio was a typically well-versed lounge unit that sprinkled close-harmony vocals into a repertoire of standards and originals. Although long-playing records were well established by the time that Pate recorded these tracks for 10 and 12 release the performances are all of short duration, allowing scant space for solo elaboration. The result is a series of pithy, concise but rather unsatisfactory peeps at a polished working group that surely stirred the senses to a greater degree in live appearances. Vocalist Gwen Stevens is heard to advantage on a couple of cuts (I Was A Fool is a Pate original), but I cant recall encountering her name anywhere else. As for the leader, his jazz interest was confined to the 1950s. He later emerged as a producer and arranger for R&B and soul groups. Still, theres enough here to suggest that he was a more than adequate bassist."