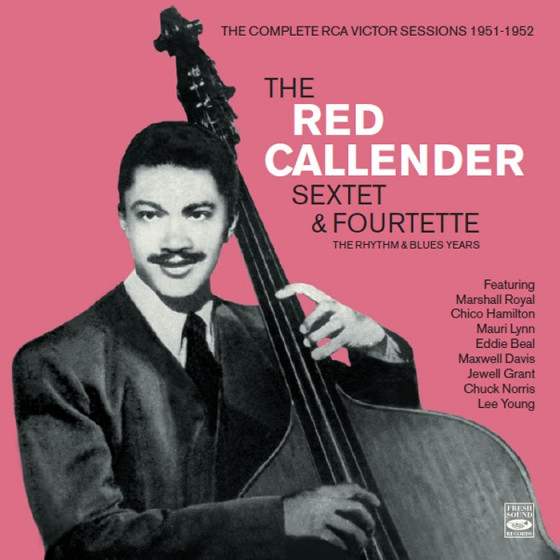 George Sylvester “Red” Callender was born in Haynesville, Virginia, on March 6, 1916. His family moved to New York, where he immersed himself in the local scene, particularly in Harlem. Moving to Los Angeles in 1936 he found work, if not much renown, along Central Avenue, the city’s jazz focal point. That changed when he got the chance to play and record with Louis Armstrong. His jazz profile increased to the point that in 1944 Norman Granz called to ask him to be ‘house bassist’ for the “Jazz at the Philharmonic” concerts.

Recognised as being among the city’s top bassists and arrangers of the 1940s and 50s, he played and recorded as a sideman with such greats as Lester Young, Nat King Cole, Erroll Garner, Charlie Parker, Benny Carter and Art Tatum. Outside the jazz scene, Red was also one of the leaders in the early Rhythm and Blues years, recording for almost all LA’s independent labels. Finally, he signed for the blues and R&B department of RCA Victor. During 1951 and 1952 he recorded sixteen tunes as leader of both a sextette and fourtette groups of great musicians. All these fine, long forgotten recordings, restored from the master tapes, appear here for the first time on CD, including six previously unreleased tracks that will fill a gap in Red Callender’s long and successful career.

"Bassist Red Callender was among the busiest musicians in the Los Angeles area for several decades starting in the mid-1930s. In 1951 he signed a three-year contract with RCA, to record with the Red Callender Sextette, a group that was actually a seven-man group. Between August 1951 and July 1952, they recorded 16 sides, a dozen with the sextette, and the remaining four with a quartet, billed as the Red Callender Fourtette.

While primarily a jazz player, Callender also performed as a leader of groups more properly classified as Rhythm and Blues. The recordings on The Complete RCA Victor Sessions 1951-52 (Fresh Sound – 907) fit into the R&B category, but the quality of the musicianship is at a level comparable to the jazz groups with which Callender more frequently played. In addition to the 16 sides that he recorded for RCA Victor, Callender led his Sextette on 14 additional sides recorded for Hollywood Records, including four tracks backing vocalist Linda Hayes. While not strictly a jazz CD, the music has jazz elements, is nicely arranged and well executed."

"This is the kind of material that makes Spain-based Fresh Sound Records the standard bearer for historic recordings.

Red Callender made his name in the jazz circles as bassist for the likes of Lester Young, Nat Cole, Erroll Garner, Benny Carter, Charlie Parker and Art Tatum. His trio sessions with Tatum are Desert Island delights. What’s less known about Callender is that he also had a foray into the R&B genre, as these sessions from the early 50s reveal.

He’s in a sextet and quartet (or “fortette” as he liked to call it) format, with the latter consisting of Eddie Beal/p, Chuck Norris/g and Lee Young/dr sounding earthy as all get out on ”Blues for JT” an d’ Loose Pork Chops.” The sessions vary between horn players, with Marshal Royal/as, Maxwell Davis/ts and Floyd Turnham/bs joined by Chico Hamilton (!) and some timbales on a smoking “Perdido” and Mauri Lynn’s succulent voice on “Fooled Again.” The team gets the juke joint jumpin’ with a three sax team again on “Cravin’ Company” and with trumpeter John Anders, a pair of saxes, Beal, Norris and Young, the team sizzles through “Hollywood Drive” and a calloused fingered “Lonesome Rebecca.”

The three sax band shows it can swing with rough edges, as they take on “C Jam Blues,” a smoky “Poinciana” and a wonderful read of “Glow Worm.” Some vocals by Linda Hayes make a hoot out of “Atomic Baby” and “No Next Time” with the band not missing a beat after a luscious “September in the Rain.” This album shows that music can be fun; when’s the last time you thought that way?"

"I will always think of Red Callender as the only musician to ever turn down job offers from both the Louis Armstrong All-Stars and Duke Ellington’s Orchestra; his studio work was too lucrative! A superior bassist based in Los Angeles who also helped to introduce the tuba to modern jazz as a solo instrument, he appeared on a countless number of sessions through the years, always uplifting the music.

Even collectors who have most of Callender’s recordings probably do not own the 30 performances on this recent Fresh Sound reissue. Callender, as Fresh Sound’s Jordi Pujol relates in his extensive and very informative liner notes, was very active in jazz starting in the mid-1930s and made his recording debut with Louis Armstrong in 1937. By 1951 he had worked with virtually every major name in jazz. After leading dates for a variety of small Los Angeles-based labels, he signed a contract with RCA Victor and recorded 30 concise performances at the head of sextets and a quartet. While Callender does not solo during these pieces, he drives the ensembles.

Subtitled “The Rhythm and Blues Years,” the performances generally fall between swing and early r&b, The selections include blues at several tempos, ballads, and jump pieces with occasional vocals taken by Mauri Lynn and Linda Hayes. Tenor-saxophonist Maxwell Davis, who was very busy during the era although he is largely forgotten today, is often the main soloist. While not as adventurous as bebop, these recordings are quite fun, infectious, rhythmic, and have their creative moments. Jazz collectors will want this colorful and perfectly-realized reissue."