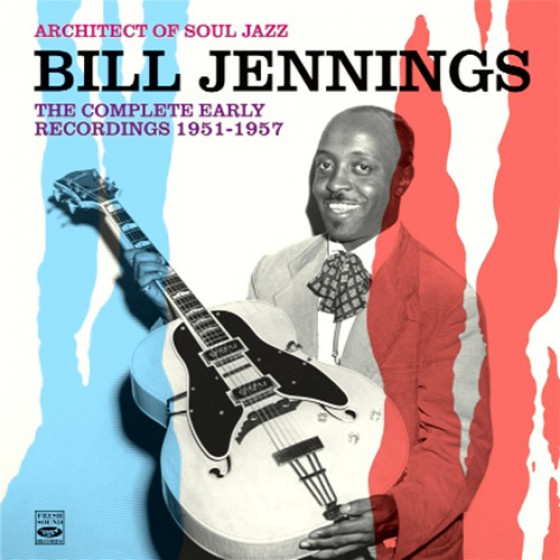 Although underappreciated by the public during his lifetime, guitarist Bill Jennings was much admired by fellow musicians, including Louis Jordan, Bill Doggett, and Willis Jackson (all of whom employed him) and B.B. King (who cites Jennings as one of his favorites). King called him a "daring player, both rhythmically and technically... because he would start a groove to going, and then whatever it takes to keep that groove going, he would do it."

The Indianapolis picker's music was rediscovered in the Nineties by a new generation of guitarists, including Junior Watson, Duke Robillard, and Rusty Zinn, who have incorporated elements of Jennings' lean, swinging approach into their blues performances. The reissue of these rare recordings for the Gotham and King labels should help to enhance Jennings' standing in the public's pantheon of great jazz and blues guitar players.

"If you go to Wikipedia for more information on Bill Jennings, youre directed to a collection of almost a dozen guys with that name: one that played ice hockey, a baseballer, and then three types of footballers-Welsh, soccer and American. Let me tell you-this is the Bill Jennings that you want.

The Bill Jennings we have here made his career from the 30s to the 50s as a sideman for Stuff Smith, Wild Bill Davis, Willis Jackson and most of all Louis Jordan. So, as you can tell, theres a lot of blues and R&B flying around, and Jennings guitar makes it work with a Charlie Christian-influenced style of picking that goes down real nice. This two cd set has him leading various bands that are long on soul and feeling, and his picking makes you feel good all over.

He gets the toes tapping on a hip little 1951 date that has him singing and playing with a fun couple of pieces like Stompin With Bill. Then, in 1954, he teams up a quintet with bop baritone saxist Leo Parker for some exciting takes of There Will Never Be Another You and What Will I Do? making some of the hottest sounds around. In the same year he cut some discs with pianist Andrew Johnson and B3er bill Doggett that go lyrical on the former and Bunsen burning on the latter. Vibes with Albert Jennings are found in a small group with Nita Lore as vocalist on Three Little Words and a blues, while some intimate duets from 1955 deliver a jaw dropping Angel Eyes and You Dont Know What Love Is. Some BBQ sauce is slapped on the pork when Willis Jacksons tenor and James Orville Johnsons Hammond stride in for a greasy Wishbone and Blues In My Heart. All of the songs are between 2-4 minutes, so they were made for juke joint jumpin! Put this on at a party and watch what happens. Jennings is a joy of lyricism, feel and swing. A textbook lesson on playing the six strings just right."

"This interesting release is subtitled The Complete Early Recordings 1951-57 but that needs to be qualified by noting that these are the Jennings recordings from that time as leader or co-leader. He recorded many other tracks in those years as sideman with such leaders as Louis Jordan (with whom Jennings had made his reputation during the late 40s), Wild Bill Davis, Hot Lips Page and others less well known. This is a typically didactic release from Fresh Sound, the implication of the title being that Jennings should be better known than he is. The notes include a compliment paid to him by B.B. King so its no surprise that Jennings sounds trenchant and authentic when playing the blues, occasionally recalling the guitar playing of Lightnin Hopkins. However it soon becomes clear that Bill Jennings was more than just a bluesman.

The opening tracks have an R&B flavour but the LP-length session with Leo Parker is a jazz date and a very appealing one with the strength of the guitarists playing matching the mellow force of Parker who, although powerful, is not in the rabble-rousing mood he revealed elsewhere. The following six quartet tracks tend to lack bite but reveal an intriguing Django influence in the guitarists playing on slow numbers. Then the group with Doggett and three alternatives from the first session return us to formulaic territory, with the two ballads offering only the melodies and no improvisation. However the quintet which opens the second CD shows a marked improvement through the presence of a a confident vibes player in the person of Bills brother Albert. I was looking forward to the dozen tracks that made up the LP the brothers recorded on their own, but I was disappointed. Somebody decided to adjust the vibes motor to produce a very fast vibrato (and a sound evoking an ice-cream vans arriving announcement) thus negating the sensitivity and precision of these mostly slow duets. The final four tracks, excepting Roses Of Picardy, take us back to R&B land and hoarsely raucous tenor, but this release has done what Fresh Sound intended and made me curious to hear more of Bill Jennings.

He recorded again with his brother at the beginning of the 60s and I shall be keeping an eye open for that currently unavailable session, hoping for less vibrato the second time around. Meanwhile within this mixed bag there is above all the date with Leo Parker to be enjoyed. (Theres also within the comprehensive booklet an interesting discography of the Jennings recordings as a sideman. This states that he played at an unissued session in 1937, when he was only 18, and recorded with Stuff Smith in 1946 before joining Louis Jordan a year or two later.)"