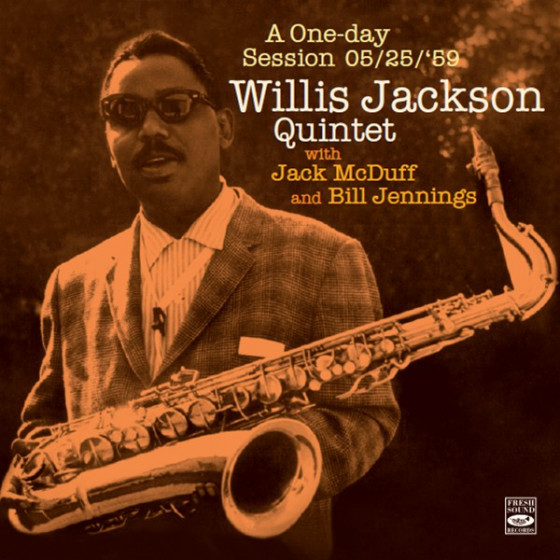 For the first time, 14 tracks recorded by Prestige in a single session and released separately in five different albums. It also includes 2 tracks from a Fire single that was recorded two days later by the same group minus Tommy Potter.

Theres a style of playing tenor saxophone which, for lack of a better name, can be called Southeastern. Its a warm, extrovert way of playing, with a heavy two-beat rhythm that can rock you off your chair. Its not esoteric, obscure or subtleeverything is laid right on the line in a blues-drenched, afterbeat style. Among its major exponents is Willis Gator Jackson (1932-1987), whose playing has definite shades of latter-day Lester Young, and though he made a every effort at restraint, the inevitable demands of the hard-blowing Southeastern way were always paramount. In it Jackson exploited his big, round tenor sound to the full, swinging straight-ahead and powerfully on most tunes, which, when combined with his full-blooded treatment of the ballads, made his work readily identifiable.

The support comes from Jack McDuff, whose persuasive work on the Hammond organ is marked by his good taste and swinging phrasing, while in a fine rhythm section guitarist Bill Jennings contributes imaginative, slightly astringent single-string guitar solos throughout this unequivocally burning date.

"If there really is such a thing as the real deal then Gator Jackson was it. I once described his leathery, honking solos coughed out over sloppy-joe rhythms and there seems no reason to finesse that now, except that these tracks for Prestige, which were culled for five different albums, show more finesse than Jackson was credited with or showed on his later, cruder Muse recordings. Anyone capable of going from the gruff romance of The Man I Love to the fast, semi-bop of Cool Grits was clearly no slouch. Great single-note guitar from Jennings, too. The usual meticulous job from Fresh Sound, with extracts from all the original liner notes, plus two bonus single tracks from Fire recorded two days later. Gator worked."

"Willis "Gator" Jackson originally made a strong impression as a honking R&B player, first with the Cootie Williams Orchestra, then with his own popular bands. In 1959, starting with this Prestige set, Jackson made his mark on soul-jazz. Teamed with the up-and-coming organist Jack McDuff, guitarist Bill Jennings, bassist Tommy Potter and drummer Alvin Johnson, Gator is heard modifying his style a little (gone are most of the screams) in favor of swinging. He performs four group originals, "Come Back to Sorrento," and "Memories of You" with soulful feeling."