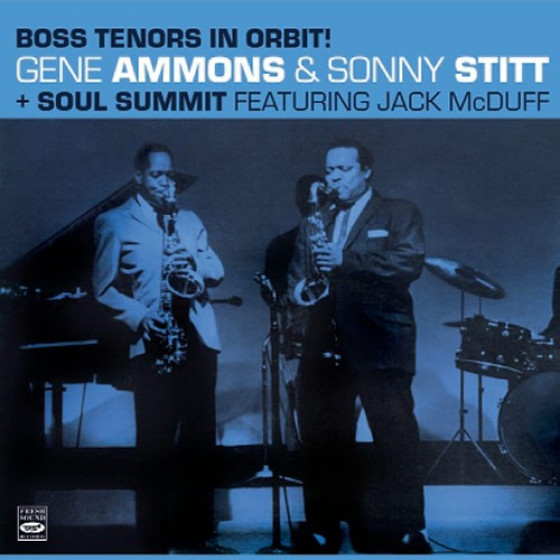 Any new record by the Gene Ammons and Sonny Stitt tenor duo was a welcome event, and a rewarding experience. These 1962 sessions are a solidly swinging, enjoyable exposition of the unfettered lets-just-blow school of which Ammons and Sittt were the deans. Few tenor men could match the sheer power of Ammons playing, and he could finger rapidly when he chose to. His lines are not as relaxed as Stitts, as these two albums demonstrate, and whatever they play, from ballads to tunes that are by no means blues, the sound and urgency of the blues pervade their work. On his alto solo on Why Was I Born?, Stitt displays the drive and dazzlingly rich rhythmic imagination that were his trademarks.

Both rhythm sections featured organ players. On Boss Tenors in Orbit! they got Sonnys cooking rhythm sectioncompletewith the rocking organ of Donald Patterson. On Soul Summit Jack McDuff feeds the soloists without ever becoming obtrusive, following along the bristling and powerful style of Charlie Persip, who lays the foundation for their tenor sax masterworks.

"Ahhh! Two tenor battles! These kinds of discs were all over the place in the 50s and 60s, but who does them nowadays? But then, you really want to hear two of todays anemic saxist play together? It might sound like an Emphysema Convention! Here, youve got beefy guys Gene Ammons and Sonny Stitt. Both 62 sessions have Byers-Donald Patterson and Jack McDuff. Oh Yeah! Boss Tenors also includes Paul Weeden/g and William James/dr while Soul Summit keeps it simple with Charlie Persip/dr. Stitt slips his alto in once in awhile as on a wonderfully warm Why Was I Born? but for the most part youve got two type of BBQ sauce vying for the beef and pork ribs, just ready to stick to your belly. Ammons tone is thicker, while Stitt swings a bit more swiftly as on Walkin or Bye, Bye, Blackbird. Then, youve got some foot stompers like Tubby and Shuffle Twist that sounds like a chocolate swirl at the local DQ. This is YUMMY music! Fill er up!"

"Battles between two tenor saxes were commonplace in the 50s and 60s, but these recordings come from the reeds of co-leaders of their bands. They had a mutual respect for each others styles of attack on their instruments and on their music, Sonny driving forward, be-bop oriented, while Gene leaned further back into soul. The latter had huge power in his playing, not matched by many saxophonists, but the swiftness of Sonnys inspiration and implementation of his ideas nicely balanced Genes lust and his skill at building a solo.

Sonny Stitt was of course a passionate devotee of Charlie Parker and his alto playing often sounded like Parker, note for note as it were, until he moved essentially to tenor, when he took in Lester Young as well! Eventually, he in turn began to influence John Coltrane. Gene Ammons also displays some of Parkers be-bop dialect and the practice of chord substitution, but he didnt stray too far from the marketable blues and R&B
with which he was more familiar.

The sound of the two tenors is terrific. They swop notes and themes to and fro with considerable facility and there is never a hint of winning or losing territory. Riffs from both organists seem to lead the saxes towards each other and help them to meld and the rhythm sections are solid throughout. Both sets are full of energy and ambition and are inspirational in their marvellously elegant, pulsing imagination, truly solidly swinging jazz."