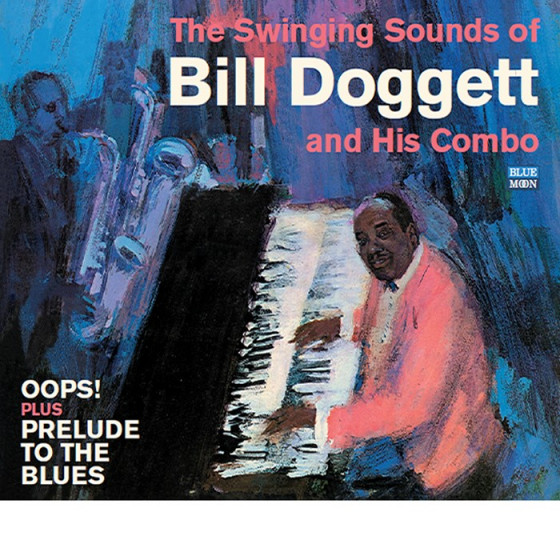 Organ combos have a long and, at times, unsung history in jazz. This is as much about fashion as anything else, but the list of imposing jazz Hammond men (and women) includes such diverse players as Larry Young, Jimmy Smith, Shirley Scott, Richard 'Groove' Holmes, Jack McDuff, Jimmy McGriff—and Bill Doggett.

Like so many organists, Doggett began as a pianist leading his own band, but his experience embraced Lucky Millinder’s swing band with which both he and Millinder drifted towards the rhyhm’n’blues end of the spectrum in the late 1940s. He also played with Louis Jordan “jump blues” band and worked with the popular vocal group, the Ink Spots, and when he switched to Hammond organ in 1950 he had a grounding in groove-oriented jazz and popular music that served him impeccably well when he started his first organ combo.

That experience runs through the albums collected here. Both “Oops!” and “Prelude to the Blues” display the forceful, aggressive, but always swinging style that made his two-tenor-and-guitar bands so hugely popular and enjoyable. It was unpretentious but impeccably grooving music. As he remarked; “People have a real understanding and appreciation of the beat, and that’s what I give them.”

(*) Bonus Tracks, not part of the original LP configuration

Bill Doggett, organ, and His Combo

"If you want your Hammond B3 brimming with the blues, step down a flight into the juke joint of keyboardist Bill Doggett. This disc has his albums filled with ham fisted Hammond work, along with swaying saxes and toe tapping drums. Recorded in 1962, these two sessions make you feel like the juke joint is jumping!

The hands are clapping in a gospel style for vintage R&B pieces like the two part “Honky Tonk” whle there is a backbeat on “I Cover The Waterfront” that might create a tidal wave.’ The saxes of Wilmer Shakesnider, Cliff Davis and Les Taylor  mix with earthy guitar licks from Floyd Smith and Wally Richardson while Bob Bushnell/b and George Johnson/dr supply a gospel groove on “Bluster” and an rock boogie to “Oops” and the two part “Mommy.”

The saxes of Davis and Benny Nelson wail on “When It’s sleepy Time Down South” while Billy Buttler’s guitar bops with delight on “Blue Prelude” and All Souls Blues.” As for Doggett himself, he makes groove so deep you’ll need a trowel to get out, and oozes like lava on “Opus D”, “Don’t Explain” and “Careless Love.”  The music goes down like the ultimate comfort food, filling up whatever part of you that was  hungry."