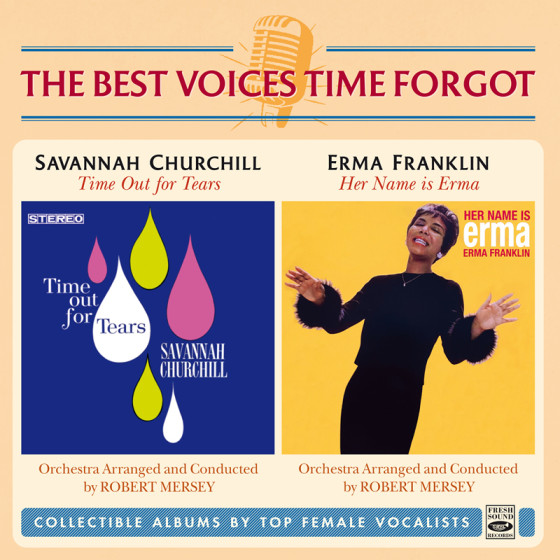 Time Out for Tears
Savannah Churchill (1920-1974) gained national recognition in the late 1940s as the most unique ballad and rhythm & blues singer of the day. Employing a sultry style and suggestive lyrics, the one-time choir singer was cashing in on one hit after the other, selling some fourmillion copies of her torchy tunes. In late 1956, she considered retiring due to a broken hip resulting from a freak accident and causing severe debilitating injuries from which she would never fully recover. After being confined to a wheelchair for 18 months, Savannah gradually resumed her nightclub career in the summer of 1958 while walking with a cane. In 1960, she recorded the album Time Out for Tears, for the Philadelphia-based Jamie label.On this excellent LP (the only one of her career) accompanied by an orchestra arranged and conducted by Robert Mersey, she brought some of her old hits back to life, and introduced several new bluesy ballads that flawlessly suited her soulful, inimitable singing style. In January 1961, Jet magazine called her the “comeback of the year.” Sadly, her health was significantly declining and it eventually forced her to retire. She died in 1974 at the age of 53.

Her Name is Erma
Erma ranklin (1938-2004), like her younger sisters Aretha and Carolyn, began singing in the church choir of her father, the Rev. C.L. Franklin, minister of the largest Baptist congregation in Detroit. Erma’s voice, shaped by gospel singing, held great promise as a rhythm and blues singer when she was still in high school. However, it would be Aretha who would first gain fame as a solo singer, while Erma had to finish her studies before her father allowed her to start a career in show business. Later, in 1961, following in Aretha’s footsteps, Erma auditioned favorably for Epic and moved to New York for a series of recording dates with the label’s producer, Al Kasha. Her first album, Her Name Is Erma, with jazz flavored standards mixed with pop tunes with a gospel feel, received a rave review of four stars on Billboard: “Erma Franklin, older sister of Aretha, shows off her warm and striking vocal stylings in exciting fashion on this new waxing. A fine flock of performances by an exceptional new talent.” Unfortunately, even though she was a remarkably endowed singer, Erma did not have the luck or support she deserved from record companies, and furthermore, her career was unfairly overshadowed by the fabulous artistic dimension of her sister Aretha.