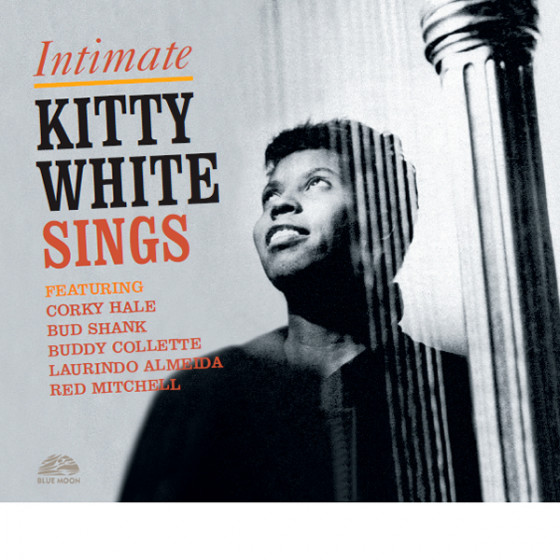 A word to the wise: listening to Kitty White (1923-2009) is a unique experience. She was born in Los Angeles into a well-known musical family, whose environment provided her with a solid background. The story of Kitty’s career is relatively uneventful, mostly because she chose to stay pretty much on home base in Los Angeles, where she earned a steady and loyal following as a pianist and singer in intimate night clubs, frequently singing sophisticated songs with well-traveled lyrics, entoured by groups featuring outstanding west coast jazz musicians.

The two albums on this set were recorded in 1954 and 1962, and for those of you who don’t know Kitty White yet, they are an excellent opportunity to be seduced by her remarkable, colorful, precise and imaginative voice, one so personal that it almost defies comparison. Her diction, phrasing and control are a study in perfection. Accompanied only by harp and flute, or by guitar, flute and bass, she sings with warmth, soul and feeling for the lyrics, and is equally at ease with pop ballads, folk songs, spirituals, and blues. It is in this torchy, melancholic mood that Miss White handles herself best. As producer David Hubert put it, “Kitty White sings, purely and simply, in a clear, proud voice that seems to say, ‘this is the way I should be heard’.”

Kitty White, sings in all tracks

"It’s amazing how many jazz vocalists have been overlooked over the decades. Here are three reissue sets that make you wonder how some singers strike it big and others get overlooked, as no one here deserved the obscurity that they received.

Kitty White (1923-2009) remained unknown in Los Angeles  probably because she never toured around, singing mostly in local clubs. These two albums, one from 1954 and the other from 1962, display a haunting beauty, both in an intimate and spartan setting. The first, A Moment Of Love has her joined by  harpist Corky Hale and occasionally with Bud Shank joining in on flute. White’s voice is reminiscent of Kay Davis in tender purity, and with just the celestial stringed support, he gentle vibrato lures you in on “I’m Glad There Is You,’ “My Romance” and “ I See Your Face Before Me”. Shank joins in for a glowing “Autumn Leaves” and dark “Yesterdays” with plenty of space between the three artists to create rich impressions of light and darkness. Eight years later, she is accompanied by Angelenos Buddy Collette/fl, Red Mitchell/b and Laurindo Almeida/g for softly swinging pieces such as “A Sleeping Bee” while giving dramatic subtones to the flamenco strums of “Johnny Guitar”. Unforgettable are the duets such as with Collette on the aria He’s Gone Away,” or on “Fare Thee Well” and “Trina” with Almeida. Even deeper are her a cappella journeys, such as “Look Away” and “Your Eyes” where she draws you in with her silhouette of a voice. Sui generis."