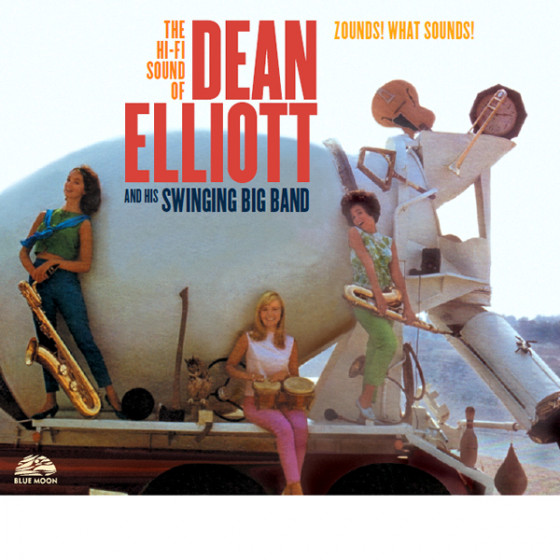 "Zounds! What Sounds!" is an album full of imaginative and swinging dance music conceived, arranged and conducted by Dean Elliott (1925-1999). His extraordinary band sounds bigger than it has the right to, featuring brasses, reeds, and a rhythm section magnified by the swinging flashes of brilliant coloring that the harpsichord brings, and by a number of unusual percussion effects in Spectacular Stereo! And the solos, scattered here and there, feature work by some of the best West Coast jazz studio musicians available, including Milt Bernhart trombone, Bob Cooper tenor, Bud Shank alto, and the glistening trumpet of Don Fagerquist.

The second album here was recorded six years earlier, and it was the first attempt by Elliott in his innovative search of a new sound in the field of dance music. With an exciting group of top Hollywood musicians, and enhanced by the colorful effects of Bobby Hammack’s harpsichord, xylophone, vibes, and assorted woodwinds, "The Hi-Fi Sound of the Dean Elliott Big Band" features some unison voices worked in with the band, in a delightful program of standards and six originals penned by the leader.

Personnel on "Zounds! What Sounds!":

Personnel on "The Hi-Fi Sound of the Dean Elliott Dance Band":

"Back in the early days of stereo albums, there were records that were simply made to “show off” the quality of your sound system. This disc is exhibit A and B for what engineers were trying to achieve in attempting to bring an entire jazz orchestra into your room. This music itself is a real treat as well.

Dean Elliott was sort of like the Brian Eno of his day in the sense that he liked to add all of these peculiar electric-sounding and atmospheric effects to create an experimental sense to the big band charts. The musicians in the 1956 and 1962 sessions are top notch, including Bud Shank/as, Bob Cooper/ts, Alvin Stoller/dr, Ted Nash/fl, and Don Fagerquist/tp. Some of the pieces such as “Fine and Dandy” or “A Gal In Calico” actually have a hint of Nelson Riddle, while you get some vo-cool voices on “I’ve Had My Moments”. There are some pulses that sound synthesized on “Baubles, Bangles and Beads” and intriguing sound effects on “It’s All Right With Me” and “They Didn’t Believe Me” as well as some Middle Eastern nuances on “Say It With Your Eyes”.

Once again, the liner notes and session info is quite educational, and the music is definitely begging to be used for either a move or video gam."