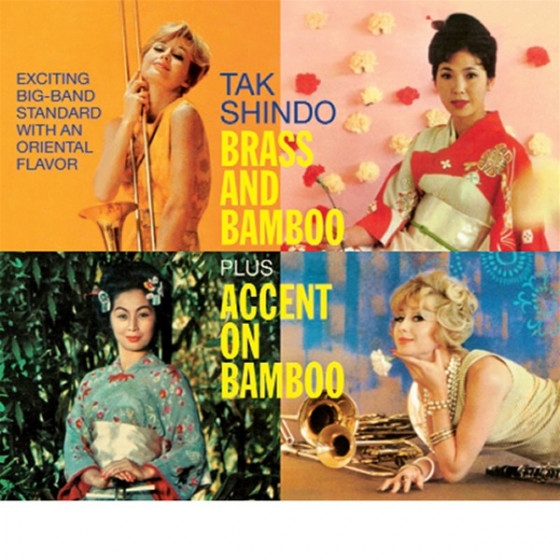 During the late 50s and 60s Takeshi Tak Shindo (1922-2002) was one of Hollywoods busiest young musicians, amassing an impressive list of arranging and composing credits in film and TV. He worked with some of the finest jazz talents around, including, as he does here, the Candoli brothers, Conte and Pete, Shelly Manne, Ted Nash, Bud Shank and arranger Bill Holman.

He was also one of the most prominent artists in the flourishing exotica style of music, anticipating, in a sense, jazz musics current interest in world music and unusual instruments. In these two sparkling Capitol albums, Brass and Bamboo (1959) and Accent on Bamboo (1960), he offered a new and refreshing musical concept, combining the exotic sounds of ancient Japanese instruments with dynamic big-band orchestrations. Focusing, except for three Shindo originals, on standards, the music is full of thrilling effects, with all arrangements by Tak, except for three scored by Bill Holman.

In this fascinating blend of two musical cultures each piece is cleverly oriented by Tak Shindo to forge a dynamic, intelligent fusion of sounds and ideas that produced a singularly fine collection of brilliant, swinging dance arrangements.

Orchestra and Chorus, arranged and conducted by Tak Shindo

Collective personnel on both albums includes [*]:

"What separates Tak Shindo from rival exotica maestros like Les Baxter or Martin Denny is authenticity: Shindo's Japanese heritage lends an unmistakable sense of truth and experience to his recordings, which benefit equally from his long career as a composer and arranger in the west. As its title portends, Brass and Bamboo marries traditional swing arrangements with Far East-flavored percussion and textures, transcending the dreamy conventions of the exotica genre to create music that is far more energetic and visceral. Shindo's expert, imaginative cocktail of kitsch -- one shot saxophone, one shot samisen -- boasts a subtlety often absent from records of this ilk, and manages to anticipate the scope and ambitions of world fusion decades before the term even entered the vernacular. The remarkable "Bali Ha'i" alone is worth the price of admission."

"The follow-up to Tak Shindo's breakthrough Brass and Bamboo minimizes the Japanese musical elements that are the record's supposed selling point, instead favoring inventive but largely straightforward big-band arrangements rooted firmly in the conventions of the idiom: even the liner notes promise "this well-arranged meeting of East and West is a swinging thing, and Oriental too -- but scrutable." While standards like "One Fine Day" and "Festival in Springtime" incorporate traditional Japanese instruments like the koto and the ondo to lovely effect, Shindo largely sidesteps kitsch, favoring bold, dynamic jazz with few traces of non-Western elements -- the irony is that Accent on Bamboo was marketed, collected, and experienced as exotica, as though any music created by a Japanese-American should automatically fall within the genre's classifications."

Both by Jason Ankeny —All Music Guide

"The cover says exciting big-band standards with an oriental flavor, which translates to a fusion of well-known big band hits with oriental instrumental flourishes in the exotica style of the day. It might be surprising to learn that Japanese-American arranger Shindo (d. 2002) was one of the busiest musicians in Hollywood in the 1950s and 60s (among his work was music for Gunsmoke and The Ed Sullivan Show). For the jazz fan the chief appeal will likely be the presence of Conte Candoli, Bud Shank and Shelly Manne, jazzmen who spent a lot of time in the studios and add an authentic jazz stamp to the proceedings."