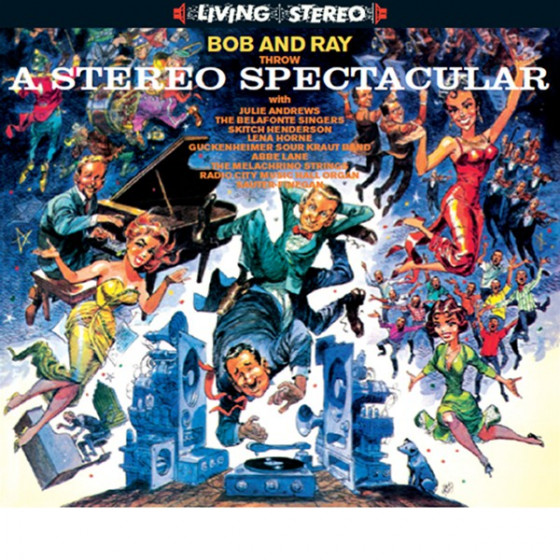 The days when svelte black-clad women and elegant men met at a cocktail party to exchange notes on the poetry of T.S. Eliot or deprecate the passing of the Third Avenue El seem to be over. For now when the gentleman sidles over to the female sophisticate, his opening gambit will like as not be an inquiry into the condition of her pre-amp.

This change in conversational material is not limited to chatter over the canapés. Among the blue-jeaned youngsters, hi-fi publications have superseded Popular Mechanics and the Girl Scout Handbook and we hear they are thinking of revising McGuffeys Reader so that the very youngest set will not be ill-prepared to meet the challenge of stereo living.

A new language of words has arisen for the conversationalist and a new language of sounds for the listener. These new sounds are inside this album. In fact, no double woofer household can be complete without this disc. Maybe thats immodest, but where else can you hear a human clock swinging in three dimensions? or stereophonic bagpipes, doors or cats, for that matter?

Thanks to Dr. Ahkbar (Bob and Rays non-existent research scientist), the stereo medium is subjected to mad delvings and probings far beyond the wildest dreams of the early copywriters. Stereo experiments never before attempted are brilliantly executed by the crazed genius in his tower. Never before attempted and lets hope, never again. And if youre the kind that resists all this technical stuff, theres always Abbe Lane in three dimensions!

Here are ten top performances by top RCA Victor artists at their stereophonic best. All selections are complete and unexpurgated.

14. The Belafonte Singers
The Stirring The Ox Drivers (Carter-Corman) 2:52
[From PRESENTING THE BELAFONTE SINGERS, LSP-1760]

"Bob & Ray's first album for RCA Victor, Bob & Ray Throw a Stereo Spectacular, is actually a sampler record for the label's Living Stereo line with a handful of comedy bits appearing between cuts from other albums in the series. Bob & Ray's portion depicts their visit to the castle of Dr. Ahkbar, a mad scientist (voiced by Bob Elliot) whose bizarre experiments give the comedians an excuse to fool around with stereo sound effects. Listening with headphones is advantageous, but most of the humor holds up independently of the stereo effects. The one exception is "Bob and Ray in the Laboratory," which consists of practically nothing but sound effects. The music ranges from the orchestral instrumental pop of George Melachrino, the Sauter-Finegan Orchestra, and Skitch Henderson to vocal performances by Abbe Lane and Julie Andrews. Richard Leiber plays "The First Noel" on the pipe organ, Lena Horne performs the suggestive "New-Fangled Tango" live in concert, and Harry Belafonte's Belafonte Singers contribute the folk song "The Ox Drivers." The gleefully cacophonous Guckenheimer Sour Kraut Band takes the prize for providing the most unusual musical selection, but the overall program is extremely diverse. Whether Living Stereo collectors want to hear Bob & Ray -- or Bob & Ray fans want to hear a Living Stereo sampler -- is another matter, but the comedy and music are enjoyable."