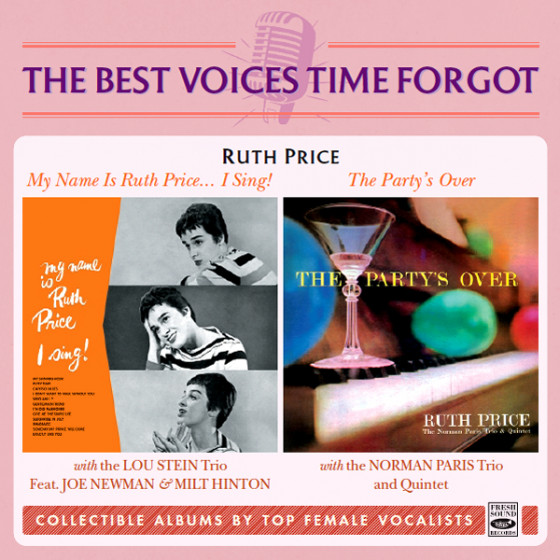 In May 1953, a sprightly 23-year-old girl by the name Ruth Price took the audience at Birdland by surprise when she jumped on stage to sing with the Johnny Smith trio. Ruth, a recent discovery of Charlie ventura’s manager Don Palmer, hailed from Phoenixville, Pennsylvania, where she was born in 1930.

She was a former ballet dancer and had only switched to singing recently. A month later though, Ruth was back to dancing, mostly because her reputation as a ballerina cast enough of a shadow that no club believed she was serious about singing jazz. Luckily, at Palmer’s suggestion, in the summer of 1954 Ruth found herself singing with the Charlie Ventura quintet for about a week, replacing regular singer Mary Ann McCall who was on sick leave. This was Ruth’s first major job, and even though it was only a sub, it opened the doors to a number of club engagements.

In 1955 she signed for Kapp Records, and her first album for the label was "My Name is Ruth Price… I Sing," an extremely encouraging debut for a young woman who was just turning 25. We hear a Ruth full of fresh swing, with fine control, good range and even better phrasing, capable of delivering sensitive interpretations of the lyrics in a variety of approaches.

A year later a second album for the label followed. It was titled "The Party's Over," and in many ways it confirmed her best qualities, expanding on the many facets of her talents. Her assured delivery of each tune leaves little doubt that, despite the initial concerns of club owners, Ruth Price actually was —by nature— a jazz singer.

Ruth Price, vocals in all tracks

"Although very young and relatively inexperienced in the early and mid-1950s, Ruth Price made an instant impression on those who heard her in those years. She sang often for a youthful audience at Philadelphia’s Music City and youthfulness is an apt word in describing her sound and her approach to lyrics. There is an often engaging simplicity in the vocal line, and no artificiality, no hint that she is making a statement. Rather, the simple reading of the lyric, which hews to the lyricist’s intentions, is itself a statement that carries subtle weight.

A fleeting appearance at Birdland in 1953, a week with Charlie Ventura the following year, and a spell of several months with Harry James in the mid-1960s apart, Price’s major vocal contribution came with the two Kapp albums presented here. The songs include a few that are rarely heard with most being well known but far from overused. Nowhere, is there anything that jars, and much that is a delight.

Lou Stein’s accompanying trio on I Sing are supportive, rhythmically engaging and never encroach on the vocal line, not even when Price duets with Ellis Tollin on Shadrack. Interjections from the guest soloists are good and add to the jazz credentials. Although not as well known, the accompanying trio and quintet on The Party’s Over are similarly at the service of the singer.

In later years, Price made few recordings but she was far from done with the jazz world. For decades she was artistic director and a driving force behind the Jazz Bakery in Los Angeles and she also taught at UCLA’s Department of Ethnomusicology.

Price’s actual age is hard to pin down. The latest date given is 1938, which would make her an unlikely 15 at her Birdland appearance and 17 on the first of these albums. The earliest date is 1930 and as this comes by way of Scott Yanow is likely accurate and means that Price has now entered her 90s.

This reissue in Jordi Pujol’s The Best Voices Time Forgot series is warmly recommended to those who like to hear good songs sung well."

"One of the real pleasures in today’s technology is the fact that guys like Spain’s Jordi Pujols is able to find obscure jazz albums and help us rediscover true artists that were overlooked during a time of singer overload. This latest set is simple irresistible. The liner notes answer the questions as to why this lady never got much traction.

The real ringer her is this two disc set by Ruth Price, who’s now best known as the owner of LA’s best jazz venue, the venerable Jazz Bakery. I’m willing to bet that no one who attends the shows that she sponsors and produces has even an inkling of how powerful and original a vocalist this lady was. There’s a video of her singing with Stan Getz on youtube, and that’s about as much as I knew. Now, with these albums from 1955-1956, you can’t look at her the same way.

Her 1955 session has her teamed with pianist/arranger Lou Stein’s trio of Milt Hinton/b and Ellis Tollin/dr along with guests Tony Mottola/g, Frank Wess/ts and Joe Newman/tp from Count Basie’s Orchestra. What grabs you right away is her mastery of giving clever intros to each song, flexible and clever on “My Shining Hour”, giving a dash of Ella Fitzgerald on a clever “Gentleman Friend” declaratory with Tollin on a bold “Shadrack” and giving a hint of Judy Garland on the vibrato’d and hopeful “Someday My Prince Will Come”. Through it all, she oozes with confidence and artistic ambition.

Her 1956 follow-up with Norman Price/p, Frank Cerchia/g and Ed Arndt/b (and various guests) shows that her debut was no fluke. She loves grabbing your attention, going into a dark Judy Garland mode with Price on “Calypso Blues”, playing her role well on “I Am The Girl” and a hep cat with vibe support on “I Guess I’ll Have To Dream The Rest.” Her solo intro to the album on “By Myself” lures you in before she then teams up with the drummer for a great swinging feel. She gets reflective buoyed with Cerchia on “(I’m Afraid) The Masquerade Is Over” and gives an aria for the title tune a la Pagliacci. She gives slight colors of a wide variety of vocalists, such as Ella, Garland and even Blossom Dearie, but she sounds completely original, making you want to ask her next time at a Bakery gig when she’ll sing at her own club!"