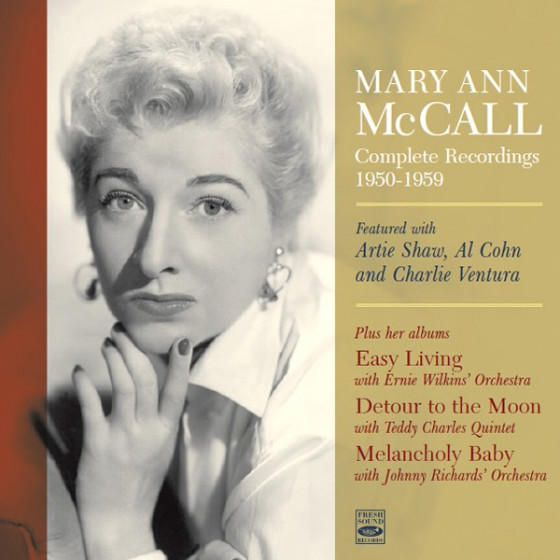 Acknowledged as the one of the most expressive voices in jazz, singer Mary Ann McCall (1919-1994) worked with the finest jazzmen of her time, including Tommy Dorsey (1938); Woody Herman (1939-41); and Charlie Barnet (1941-43). Then, semiretired for three years, she rejoined Herman from 1946 to 1950, and also worked as a single. After that she worked with Charlie Ventura through most of 1954 before, tiring of the music business, she returned to her New Jersey home for a few years more.

She had, however, a sizable following since her Herman and Ventura days. It led her to record Easy Living, her first LP, in 1956. Arranged and conducted by Ernie Wilkins and featuring the cream of East Coast jazzmen, the album garnered a 4 1/2 star Down Beat review from Nat Hentoff, who praised her horn-like jazz acumen and supple control.

A second album, Detour to the Moon, followed in 1958. The album’s sessions were directed by Teddy Charles who said “the musicians on both dates were gassed by the way she sang”. On her third and last album, Melancholy Baby, in 1959, her relaxed musicality created an aura of composure contrasting beautifully with the variety of Johnny Richards’ colourful arrangements.

"During the big band era, the female vocalists, often referred to “canaries,” were staples of most bands. Many were fine singers, but few were true jazz vocalists. Along with Billie Holiday and Anita O’Day, the jazzers included Mary Ann McCall who sang with Tommy Dorsey, briefly, Woody Herman and Charlie Barnet. She left that scene in 1943, but eventually returned to Herman in 1946, remaining until 1950. She then worked as a single, recording with Artie Shaw, Al Cohn and Charlie Ventura. Between 1956 and 1959 she recorded three albums, Easy Living with Ernie Wilkins and His Orchestra, Detour to the Moon with the Teddy Charles Quintet, and Melancholy Baby with Johnny Richards and His Orchestra.

All of the post Herman material is compiled on Complete Recordings 1950-1959 (Fresh Sound – 918). This is an excellent collection of work by a vocalist who is unjustly overlooked today. There are 57 tracks on this two-disc set, one gem after another. McCall had a distinct voice, dusky, yet appealing, and she made each lyric come alive in a way that would bring a smile to the writer of the words. The songs range from an undeservedly obscure Lou Carter song of love lost, “The Sky Is Crying;” to mostly forgotten gems like “Shake Down the Stars,” “It’s Been So Long,” “It Must Be True,” “I Wished on the Moon,” “Moon Country” and “Blue (And Broken Hearted);” and on to many standards such as “I Cried for You,” “There’ll Be Some Changes Made,” “Easy Living,” “I Thought About You,” “Blue Moon” and “Am I Blue.” Overall, the selections are terrific songs, most of which do not suffer from over exposure. This is a collection that you will find yourself returning to often."

"Just when you think you’ve heard every jazz vocalist, Fresh Sound Records finds another mother lode. This time it’s Mary Ann McCall, who was a “canary” for Tommy Dorsey, Woody Herman and Charlie Barnet before doing a few short stings and then going out on her own. This 2 cd set covers her important years, and you’re going to be kicking yourself for not knowing about her sooner.

The first disc has her doing a couple of tunes with Artie Shaw’s 1950 Gramercy Five, and she’s sultry and expressive on “There Must Be Something Better Than Love” and “Nothin’ For Nothin’.” She’s got a Billie Holiday sense of a desultory tone with Al Cohn’s Orchestra (with Red Rodney and Gerry Mulligan) and displays impeccable bop time on “The Sky is Crying” and “I Cried For You.” With Charlie Venture’s smoky tenor, she is confessional on “Please Be Kind” and sensuous during “We’ll Be Together Again.”

Her solo album from 1956 has her in front of Ernie Wilkins’ Orchestra, and is soulful and confident on “Shake Down the Stars”, bluesy with a swing on “You Can Depend on Me” wistful on “Deep  Purple” and carries a torch during “Something I Dreamed Last Night” as she makes every enunciation fit the mood.

The second disc has her with Teddy Charles’ “Quintet” for a 1959 session that includes “moon” in every song title. Some songs have added strings, and she is harrowing on “No Moon at All” and delivers a Puccini aria on “I Wished on the Moon.”  Her lyricism is clever and clear on “Oh! You Crazy Moon” and shadowy during “The Moon Was Yellow.” Wow!

Johnny Richards brings his Kenton influence for the 1959 album that has “Melancholy” in either the song title or mood. The horns are dramatic and flamboyant on “The Thrill IS Gone,” and “Blue and Sentimental” and McCall rides the brass tidal wave like a long boarder, while she is expressive and inviting on the cozy “MyMelancholy Baby” and vo-coolish “Am I Blue.” With strings, she’s a perfect lounge lizard on “My Old Flame.” She’s got her own voice, style and delivery, and it’s  winner. The superb liner notes and studio notes give you tons of interesting information on this important lady. Find this one NOW!"