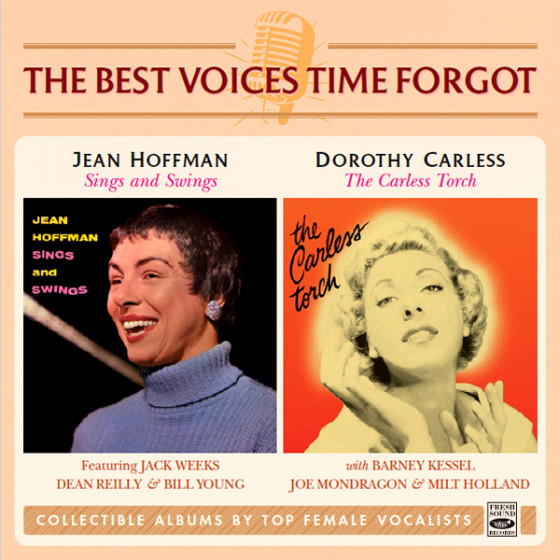 Sings and Swings
Jean Hoffman (Portland, 1930) is well-known as an unostentatious, small-voiced singer, and a pleasantly prodding, rhythmic pianist. She made a name for herself in the San Francisco club circuit during the ‘50s, often supported by bass and drums. In 1957, Billboard hailed the release of her first album, Jean Hoffman Sings and Swings, with some words of praise: “An exciting new voice, a rarity indeed in today’s market, has at long last blossomed via chirp Jean Hoffman, who combines the best elements of jazz styling without negating her pop commercial lure. While it’s a little voice, it’s strong, resonant and powerful in expression. Her rendition of Bluebird of Happiness is one of the freshest and most imaginative arrangements of this tune to come along in many a moon, and coupled with the other standards in this package, it makes for palpitating listening. An artistic success, deserving of heavy exposure and air-play.”

The Carless Torch
Husky voiced Dorothy Carless (1916-2012), was one of England’s top warblers of the 40s and 50s. She studied classical music intensively and was an accomplished pianist in her teens. However, at 17 she became passionate about jazz. In 1937 she auditioned for bandleader Ray Noble, who asked her to sing instead of playing piano. Later she moved on to other bands such as Ambrose and Geraldo. Within a few years, working as a pianist and singer for the BBC during World War II, she became a national celebrity. In 1953 she moved to California, where she appeared in top night-clubs and many radio and TV shows. Dorothy’s voice and style were etched indelibly in her 1956 album “The Carless Torch,” in which good, suitable, unobtrusive backing by the Barney Kessel Trio serves as the backdrop for a number of time-tested torchers sung with intimate phrasing and feeling.

"Increasingly the albums that slip over my transom are sprinkled liberally with variants of the new buzz word that has infected all the arts, by which I mean that the fare attempting to win over my jaded palate is “a reimagining”, a “fresh imagining” or other synonyms for desecration. How I wish that just once these ladies – for they are invariably on the distaff side – would forget that re- prefix and just imagine that two professional craftsmen sat down to write a song and actually put some thought into it: that the composer thought about the time signature and the tempo that would best reflect the mood and that the lyricist sought out true rhymes that would tell the story in the best possible manner rather than settling for the “kiss my assonance” approach that so often obtains today.

More and more, Fresh Sound is becoming the label of choice for saddos like myself who find nothing wrong in melodies that are hummable and lyrics that display wit, charm and intelligence rather than a grasp of graffiti. All of these qualities are to be found on this double CD. One native American, Jean Hoffman, and one transplanted Brit, Dorothy Carless, totally independent of each other and in different cities, opted to launch debut albums within a year of each other in the teeth of a musical revolution, or, to put it another way, in the mid-1950s.

Ms Hoffman accompanies herself on piano with Jack Weeks on bass and Bill Young on drums. Rodgers and Hart’s Dancing On The Ceiling kicks things off on the right note with a gentle-to-wistful reading albeit minus the verse. Duke Ellington’s I Got It Bad And That Ain’t Good takes the temperature up a notch, a pace that’s maintained by Makin’ Whoopee. Then comes the classiest number on the album by a country mile, Vernon Duke’s standout ballad What Is There To Say, arguably one of only five songs (I Can’t Get Started, April In Paris, Taking A Chance On Love, Autumn In New York) most buffs can identify as Duke’s work despite his penning dozens. (Alas, following his one hit show, Cabin In The Sky, he turned out 10 flops hand-running on Broadway.) The ballad gets a fine reading by all concerned – Hoffman is never slow to allow her two colleagues to stretch out and it really is a quartet rather than a singer-pianist and a rhythm section.

Gene Lockhart appeared in around 125 Hollywood films, including the starkeeper in Carousel but he also wrote one worldwide hit song in 1918. The World Is Waiting For The Sunrise is invariably played as a jaunty uptempo entry but here Hoffman slows it right down and it works perfectly, so much so it that can be mentioned in the same breath as Bobby Short’s standout ballad reading of Bye, Bye Blackbird. Larry Hart wrote a verse and several choruses of Bewitched, Bothered And Bewildered for Pal Joey but Hoffman confines herself to one chorus and omits the verse. My one caveat is the inclusion of Time Was, a lovely Latin American number that cries out for a full orchestra and just doesn’t work in this setting. Apart from that this is a delightful album.

Dorothy Carless was one of only three seriously good “band” singers in the UK in the 30s and 40s. Hundreds of times smaller than the USA, we couldn’t really run to laundry-lists like Bea Wain, Martha Tilton, Helen Forrest, June Christy, Doris Day, Helen O’Connell, Jo Stafford et al. The other two British notables were Vera Lynn and Ann Shelton and all went on to enjoy successful solo careers albeit only Carless crossed the pond, permanently settling on the West Coast in 1953.

For her debut album she opted for the tasty Barney Kessel trio with Joe Mondragon, bass, and Milt Holland, drums, although given that Holland also weighed in with bongos, vibes and glockenspiel they may have got away with billing it as a sextet. Like Hoffman, Ms Carless has leavened standards with the under-exposed (Here Lies Love, Bidin’ My Time) and one that really should be done more often, Johnny Green’s Hello, My Lover, Goodbye. Hardly prolific, Green’s strike-rate was seriously impressive with Body And Soul, I Cover The Waterfront, Out Of Nowhere, Easy Come, Easy Go and You’re Mine, You prominent on all discerning palates.

Again I have one caveat in the shape of the last track, For Ev’ry Man There’s A Woman; Harold Arlen and Leo Robin turned out a tasty score for the third (and only musical) remake of the French classic Pepe Le Moko. Renamed Casbah this time around, it starred Tony Martin in the role created by Jean Gabin and reprised by Charles Boyer in Algiers, and he handled the vocals but For Ev’ry Man There’s A Woman just doesn’t work in this setting. That being said this is an ideal album for sad nostalgics who have been obliged to learn the hard way that Dinah Shore is a true rhyme for dinosaur and we wouldn’t have it any other way."

"One of the real pleasures in today’s technology is the fact that guys like Spain’s Jordi Pujols is able to find obscure jazz albums and help us rediscover true artists that were overlooked during a time of singer overload. This latest set is simple irresistible. The liner notes answer the questions as to why these ladies never got much traction, but for one of them, she’s still in the jazz scene, although in a different role.

The first album pairs Jean Hoffman with Dorothy Carless, both ladies from the mid 50s, and both in a small and spartan musical format. Hoffman comes of casual and influenced by June Christy, accompanying herself on the slinky “Dancing On The Ceiling” and sly on “Makin’ Whoopee” with Jack Weeks-Dean Reilly/b and Bill Young/dr. A mix of mature confidence and earthy swing are felt on “Street of Dreams” and she carries a torch on “What Is There To Say”. Any more of this lady?

Dorothy Carless is supported by Barney Kessel/g, Joe Mondragon/b and Milt Holland/vb-glock-d-bong as she mixes moods ranging from sassy Sarah Vaughanish swoons on “Baby, Baby, You’re The One” to dreamy atmospheres on “Ev’ry time We Say Goodby” and “I’ll Never Be The Same”. She carries a glowing torch with Kessel as she oozes out “My Old Flame” and “Here Lies Love”. Classy lassie."