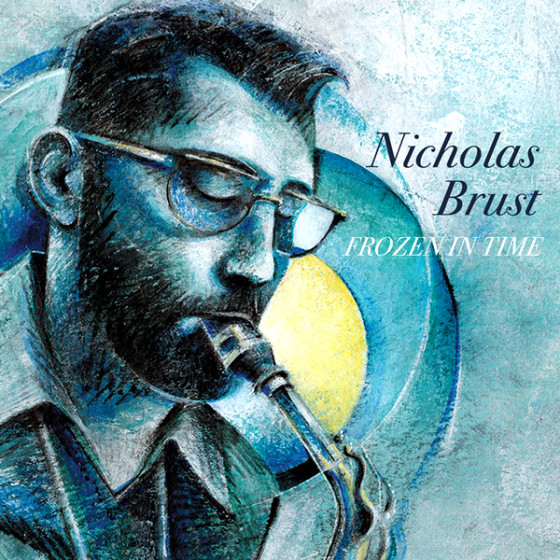 "Gliding over the expansive harmonies, incorporating every note into melodic, often singable phrases… Most welcome to the ear."

"Nick Brust’s playing and writing is evidence that the future of the alto saxophone is in good hands. Rarely do you find a young player who combines exquisite, head-spinningly dextrous playing with such thoughtful ideas and compositions. Check him out!"

"Time slows down with the absence of heat. You have this direct from the great physicist Carlo Rovelli, but it’s one of the ideas behind the title track here. Time and heat, sometimes more heat than light (whose speed is constant, Rovelli would also tell you), are important values in jazz. There’s a constant tension in the music between hot jazz and cool jazz. Sometimes we elevate the one above the other, but they’re both always there, or else it turns into a combustible mess or it goes glacial. And there’s a constant tension between time and freedom.

That’s what Brust is all about. He plays confidently with these tensions. He isn’t one of those players who either emotes of invites you to inspect his tone rows. He writes and plays from experience and part of that experience is listening to music. So: Frozen In Time is directly inspired, via Rovelli, by Chris Cheek’s Ice Fall from the Vine album; Adversity is a clever and highly effective application of George Coleman’s quartal harmony; Soliloquy In F Minor (which doesn’t sound like its title suggest) was suggested by Robert Glasper’s music and by Roy Hargrove; while A Shifting State plays with the idea of melody over a constantly shifting bass pattern.

Work Ahead and Brooklyn Folk Song are more direct in approach, straightforward evocations of the city where Brust is making his way on the music scene. And making his way impressively. He has a fine group behind him and he works with them rather than on top of them. If there are a dozen more tunes like these in his workbook, the follow-up (I’m rather assuming that, mature as it is, this is a debut recording) should be more than worthwhile. A very impressive piece of work from a saxophonist whose grasp of tone colour makes him immediately distinctive and listenable."

"How this sax man doesn't have Sonny Rollins on his list of influences is beyond me----unless (gasp) he's too young to say so?!? A real master blaster that can take his place along side any of the sax greats even at this early point in his career, this is the stuff finger popping daddios are always on the look out for. Well done."

"With so much 21st century music to choose from on your desk, your radio and stereo, it’s refreshing when a disc turns up that harks back to the swinging sixties. In this case it’s a disc by the alto saxophonist Nicholas Brust in which the composer and instrumentalist breezes through nine superbly crafted tunes with a quintet seemingly completely attuned to his vision and artistry.

The album is entitled Frozen in Time which, at first blush is a little risqué as it might seem to suggest “too much looking back”. But once you spin through the recording for the first time you soon realise that the title is suggestive of the composer’s rather cinematic style of writing –one that is visual in a painterly manner– and not some existential nod to tradition. However, every bit of the writing is “in the tradition”, which is also refreshing as most of Mr Brust’s contemporaries cannot seem to resist the temptation to write melodies that are twisted and explore harmonic conceptions driven by gesture and device that the recordings become parodies of those very gestures and devices.

Mr. Brust’s approach, then, is to write melodically and –as it turns out– this
reveals a musicianship that is genuine because it is based on songfulness; which is to say melodic lyricism enriched by counterpoint and rhythm used in such a manner as to spotlight melodic writing replete with the beauty of enharmonic surprise among other things. Also, as an alto saxophonist, Mr Brust’s originality is compelling and it seems to set him apart from others playing the instrument – indeed most other horn players.

Not for him [Mr. Brust, that is] relentless torrents of notes, honking riffs, biting attack; his trademark is a round sound, lithe and elegant as well as warm and swinging, plus the tantalizing asymmetry of his lines, which set off in wrong footing directions and unexpected turnarounds, but always seem to land exactly right melodically and harmonically, with their own fascinating rhythm. The piano and guitar –two chordal instruments– are interestingly positioned to extract novel colours and textures from the arrangements. “Soliloquy in F Minor” is a superb example of very mature and original writing. Somehow, one cannot help but expect much from Mr. Brust –and that too, quite soon."

"Saxophonist/composer Nicholas Brust, a faculty member at The Music Conservatory of Westchester, Elefante School for the Performing Arts, and The Hudson School, steps back into the performing spotlight where he is considered the premiere saxophonist of his generation, to tip his hat to his admiring audience of jazz admirers.

On this recording he is joined by Ben Eunson - guitar, Tuomo Uusitalo – piano, Josh Allen – bass, and Jay Sawyer - drums.

The tracks, all compositions by Nicholas Brust, are Work Ahead, Hearts And Spades, Brooklyn Folksong, Frozen In Time, Hymnal For Those In Need, Adversity, Something Like A Storm, Soliloquy in F Minor, and A Shifting State.

"Nicholas Brust is an alto saxophonist who, until recently, I was completely unaware of. This is not really that surprising given that his debut album, Frozen in Time, has only just been released on the Fresh Sound New Talent label.

The album is comprised of nine tracks, all of which have been composed by Brust, with a brief description in the liner notes as to what influenced the writing of them.

This is a particularly good debut album and Will Vinson’s sentiments are corroborated by Work Ahead, which is a terrific album opener that highlights what a controlled player Brust is – the track also gives room for guitarist Ben Eunson and pianist Tuomo Uustalo to show that they are an equal match to the playing of the bandleader.

There are no weak tracks on this album, and I can imagine highlight tunes will alter according to my mood when listening. Having said that, I particularly enjoyed Soliliquy in F Minor and the bass playing of Josh Allen – the drumming of Jay Sawyer should also be commended, not just on this track but throughout the album. I must also touch on the final track, A Shifting State, the goal of which “was to write a singable, catchy melody that floated over the top of a constantly shifting rhythmic framework”. The goal was reached, and the tune is a fine, contrasting “tail” to “the top” that is Work Ahead.

I like the way this album has been put together, the ebb and flow of it, the variations in tone and tempo, and the production values. This is an album of strong, clean playing throughout: there is no feeling of technique over substance. If I were to produce an end of year top ten list of new album releases, I would be most surprised if this album did not feature somewhere on that list.