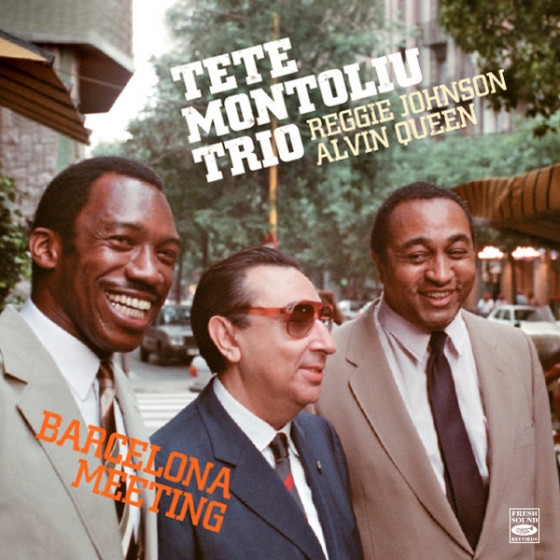 All performances on this CD were recorded on May 22, 1988. At the time, Tete Montoliu, Reggie Johnson and Alvin Queen were the dependable rhythm section behind saxophonist Jerome Richardson while he was booked at the old Cova del Drac in Barcelona. The three were in such top form and had such energy and good rapport, that they agreed to do a trio album. With musicians of this caliber, it simply could not go wrong. They were confident, but more so, they were sympathetic to each other’s ideas.

Tete played in a straight-ahead vein. He was rhythmically solid and never overeager, but still managed to get all he had bubbling inside him out there, on the piano, and put it together beautifully without ever foregoing his swinging melodic presence. Alvin generated considerable excitement with his distinctive, powerful driving force, while Reggie provided just the precise pulse to best serve the twists and turns of Tete’s playing. All the music they recorded that day has remained in the Fresh Sound Records archives for over 30 years, and this is the first time that the complete trio session has come to light. Listening to these performances we can easily agree that in addition to his talent, what comes across when Tete plays the piano more than anything else is his genuineness.

"Fate likes jazz, the random. That improvisation to which he subjects us sometimes brings us eternal offerings, like this recording archived for more than 30 years. Briefly, the story is as follows: in May 1988, the Tete Montoliu trio played at the mythical Cova del Drac Club, Barcelona, ​​together with saxophonist Jerome Richardson. On the 22nd of that month, Fresh Sound Records offered them to record a session at Estudi Gema, now disappeared. When the quartet recordings end and Richardson leaves, the trio record the tracks that give rise to a second album, "Barcelona Meeting."

In "Groovin' High in Barcelona" the explosive chemistry is made up of a virtuosity of good taste, never repeated, and a dialogue that is constant fusion (there are no monologues, everything is dialectic). The piano, the double bass and the drums seem to be the same instrument; a strange and powerful machine from which the interpenetrated tessituras arise, which also makes us imagine a single musician with six hands playing the three instruments at the same time, or that device that contains them, because the brain of the trio, without a doubt, is one.

The rebellious improvisation falls where we don't expect it, and the variations of the double bass and the drums accentuate that sieve proposed by Montoliu, a pianist who improvises with the structures, not only with the melodies. Tete Montoliu goes further: he bends the beats on slow songs, plays bluesy phrases in a ballad, and cascades notes in a calm succession of chords. Thus, All The Things You Are, What's New and I Can't Get Started are reinvented as standars, and Jo vull que m'acariciis, a song of her own, stands out as bossa and ends up dressed in pure blues. A synthesis of all this is the Oil version.To understand each other: the melody-improvisation-return to melody scheme exists here but it is very deformed, because improvisation is never abandoned. Tete takes melodies very far, proposes others, as the scat queens do, and that proposal is always discovery, automatic rewriting of music.

Two wonderful rescuse from Fresh Sounds Records, impeccably recorded and mixed, with a clarity that makes us feel close -in time and in our living room- to that genius that is Tete Montoliu. "Barcelona Meeting" and "Groovin' High in Barcelona" were at our destination.

With you again, as Dexter Gordon liked to present it, “The Great Lord of Catalonia”. Welcome."

“The original source recording for this CD has remained in the FSR archives for over 30 years. It’s the first time that this complete trio session has come to light, and I’m glad that it finally has, as it’s a great piano trio album.

The very lively opener All The Things You Are is an exciting prospect in Tete’s driving hands, with the trio swinging hard, even at this high tempo. Then bassist Reggie Johnson takes the melody and first solo on Have You Met Miss Jones?, again at a lively tempo, this time within a Latin groove (which I’d like to have heard more of during this album), and Tete responds with very idiomatic comping and soloing.

Solar gets a ballad-like solo piano introduction, before the trio again sail off on a swinging high tempo. Tete had an extremely fluent right-hand line that engaged properly with the chord changes, partly in bebop fashion, but at the same time sounding relatively modern, even to 2020 ears, e.g. with patterns in fourths, and plenty of interaction between the hands, with a left hand that isn’t too subservient to the right.

Old Folks initially brings us to a ballad tempo, and then the trio move into an uptempo All Blues (within the same track number), where there’s a concise and very effective drum solo from Alvin Queen, before the head returns with a brief change of time signature to 4/4.

After a short, rhythmically punctuated solo piano introduction, What’s New? settles into a medium tempo, and unusually for many jazz pianists, Tete sometimes walks a bass line in the left-hand, underneath Johnson’s bass solo. I Love You arguably shows Tete at his hardest swinging, where the influence of Wynton Kelly can again be heard, sounding more bluesy at medium and slower tempos.

Tete’s execution of a seemingly endless stream of ideas during a solo was clean and precise, showing great technique. All in all, I’m left wondering why he hasn’t received more attention, as he was an excellent player, offering no less than many of the conventionally accepted greats of jazz piano. Maybe he was considered less of an innovator and more adept at fusing elements that had already been in use by other players, but isn’t that what all or most jazz players do?