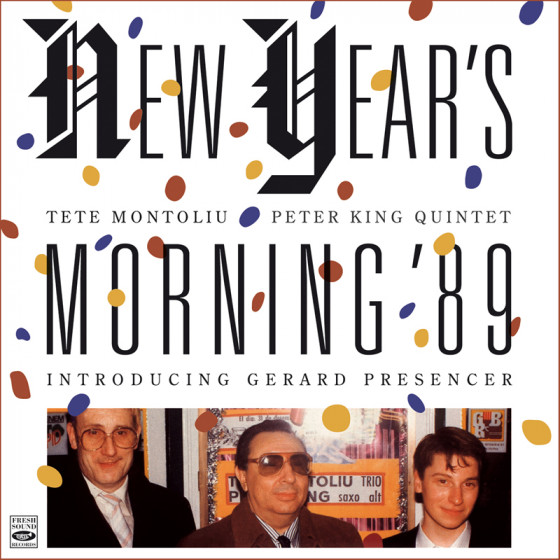 Over the years, “Cova del Drac” in Barcelona was the scene of memorable concerts by some of the best jazz players who visited the city. The one that took place in the early morning of January 1, 1989 was especially remarkable. During the Christmas holidays, 17-year-old trumpeter Gerard Presencer had joined the Tete Montoliu Trio in concerts all over Barcelona. In the meanwhile, Peter King had flown in on December 29 to fulfill Tete's long-standing wish to perform with the kinetic English alto player. An inspired and totally spontaneous decision brought the two horn players together (for the first time!) and with Tete's magnificent trio, a dynamic quintet coalesced the night of the 31st.

Gerard had always been a huge fan of Peter King, and the good rapport between Gerard and Tete was obvious, so the circumstances seemed perfect. Everyone gave their best, showing an explosive collective spirit, with passionate performances and meaningful jazz improvisation in this splendid free-blowing date in the bebop mold.

"It was a special concert at a special moment in the Cova del Drac in Barcelona. Of course the trio of the Catalan pianist Tete Montoliu (1933-1997) had performed there more often with visiting, often foreign jazz soloists. However, with the arrival of the well-known British alto saxophonist Peter King (1940-2020), a long-cherished wish of Montoliu was fulfilled.

By the Christmas of 1988, his trio had already been reinforced with the seventeen-year-old French trumpeter Gerard Presencer, who had joined the combo during his holiday. This combination had already performed successfully in some places in Barcelona before King arrived from London on December 29th. Although this concert during the early hours brought these two wind players together for the first time, it turned out to be an excellent combination. Despite the inevitable choice of jazz classics, the result was an inspired hard bop club session with good to excellent solo work. The youthful Presencer turned out to be a talented trumpet player, the experienced altoist King a passionate improviser and pianist Montoliu a tasteful accompanist and soloist. Together with King, he delivered a surprising and sometimes playful rendition of 'Round Midnight. As a whole it was a successful performance by this occasional formation, who performed again on November 3, 1990 at the Jazzfest Berlin.

The concert in the Cova del Drac, originally released as a double LP, has now been re-released on a single CD. Perhaps not a must for fans of hard bop, but certainly very worthwhile."