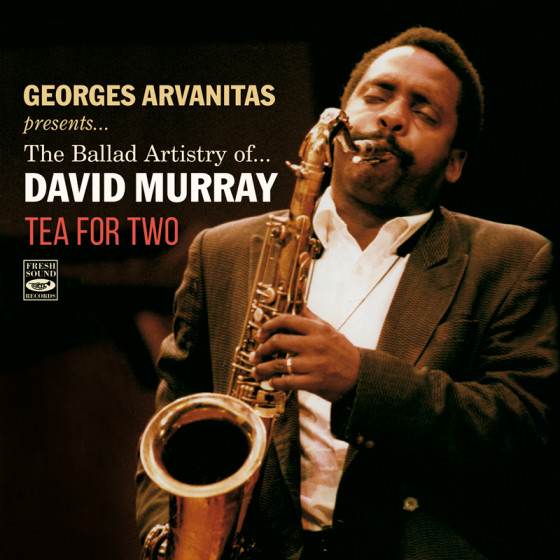 This relaxed duo performance presents a delightful challenge for the listener and features genuine musical sensitivity and an honest jazz approach to playing ballads. David Murray projects the more affectionate and sensitive side of his style with his distinctive full tenor soundwhich throbs deeply and slowly tears when playing this classic material. Georges Arvanitas displays the skill and feeling he had for playing behind a soloist as well as his emphasis on the melodic treatment of the tunes while never being superficial or merely tricky. His improvisations are tasteful, relaxed, subtle, essentially swinging, and genuinely bluesy on “Blues for Two.” It is this mature approach to jazz that sets Georges Arvanitas apart, and also one of the reasons why his piano is so enjoyable to listen to. The title “Tea for Two” couldn't be more descriptive of this excellent and unique session.

"Tenor-saxophonist David Murray has been a giant of the avant-garde since the late 70s, whether playing unaccompanied solos, working with the World Saxophone Quartet, McCoy Tyner, and some of his most adventurous contemporaries. Rather than take John Coltrane as his musical role model, Murray's big tone has always been more influenced by Ben Webster and Paul Gonsalves.

This particular project from the Fresh Sound label is quite a bit different than most of Murray's many recordings. Originally designed in 1990 to be a set of duets with pianist Tete Montoliu (who became unexpectedly ill shortly before the recording), it instead teams Murray with the versatile French pianist Georges Arvanitas. Arvanitas, who passed away in 2005, was a bop-based player who along the way recorded with such Americans as Pepper Adams, Cat Anderson, Jimmy Archey, Chet Baker, Don Byas, Bill Coleman, Buck Clayton, Sonny Criss, Ted Curson, Eddie “Lockjaw” Davis, Bud Freeman, Dexter Gordon, Coleman Hawkins, Barney Kessel, Yusef Lateef, Anita O’ Day, Stuff Smith, and Ben Webster; quite a discography!

For this outing, Murray and Arvanitas perform seven ballads and Arvanitas' 'Blues For
Two.' The tenor plays quite melodically, always keeping the theme in mind and only
occasionally hinting at going outside. He shows a great deal of self-restraint on such
songs as 'Polka Dots And Moonbeams,' 'Body And Soul,' 'I'm In The Mood For Love,'
and the only medium-tempo song, 'Star Eyes.' The pianist is very much at home in
this setting, playing with taste and swing while being in a mostly supportive role.

The Ballad Artistry Of David Murray is a delight. Who would have thought that Murray
would be caressing the melody of 'La Vie En Rose?'"