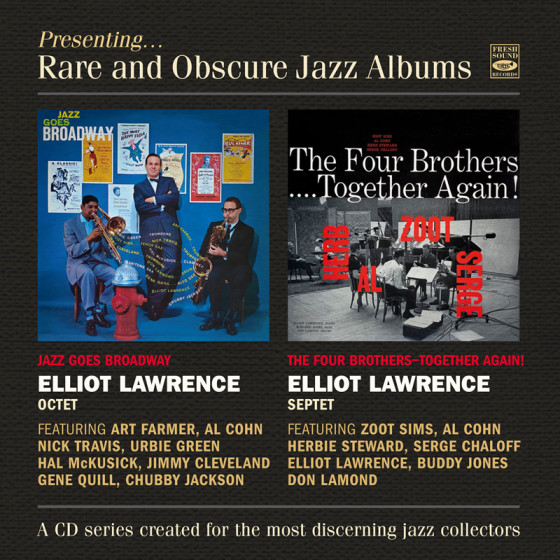 Jazz Goes Broadway
In the 1950s there was a prolific trend to record albums of jazz versions of Broadway shows, and this album was a very welcome addition, largely because, as Nat Hentoff noted in his liner notes, “we finally have an illustration, on most of the tracks, of how current musical theater and jazz can meet without jazz having to yield its vigor or spontaneity and without the songs themselves being disfigured. This time the two idioms met under less constricting circumstances than have often previously been operative.” The songs for this energizing survey of Broadway scores were chosen by conductor-pianist-arranger Elliot Lawrence and Bob Rolontz, who produced this date. The charts are neat and spare, sketched by Lawrence, Manny Albam and Al Cohn, leaving plenty of room for blowing, over a low and reedy ensemble sound. 'Jazz Goes Broadway' is the result of a fresh and informal perspective of the Broadway environment, performed by a group of all-star jazzmen who managed to convey a consistent vitality.

The Four Brothers - Together Again!
Four Brothers became Woody Herman Second Herd’s main number in 1947 for his four-star saxophonists, Zoot Sims, Herbie Steward, Stan Getz and Serge Chaloff. Later, in 1948, Al Cohn joined the band, replacing Steward, and Jimmy Giuffre came in for Sims in 1949, the brothers’ last year together. The secret behind the success of the Brothers’ sound was the blend they achieved, making them one of the most moving reed sections in jazz. The idea of bringing 'The Four Brothers - Together again!' and recreating the much imitated sound in its original form came about in a conversation between Elliot Lawrence and Bob Rolontz of Vik. For the rhythm section, Elliot Lawrence’s piano was flanked by the Brothers’ original Herman Herd colleague, Don Lamond, and by the fine bass of Burgher (Buddy) Jones from Hope, Arkansas, an associate of Elliot’s for several years. Aside from Giuffre’s Four Brothers itself, most of the music assembled for the session consisted either of new material by Al Cohn or Manny Albam or old instrumentals brought up to date, such as the two Mulligan originals arranged by Elliot Lawrence. For those who were moved by the Herman brothers, this album is a must.

"Although he mostly worked in radio, television, and the studios in the 1950s, pianist/arranger Elliot Lawrence also led a series of fine swing-oriented jazz dates. Most of his sessions were at the head of big bands, but, for this LP, Lawrence leads a pair of overlapping octets. Such soloists as Art Farmer or Nick Travis on trumpet, Jimmy Cleveland or Urbie Green on trombone, altoist Gene Quill, clarinetist Hal McKusick, tenorman Zoot Sims and Al Cohn (switching to baritone), the groups perform ten songs taken from Broadway shows. Four ("Just in Time," "I've Grown Accustomed to Her Face," "On the Street Where You Live," and "Mack the Knife") became standards while the other six sank into obscurity. The jazz all-stars (which also include bassist Chubby Jackson and drummer Don Lamond) uplift all of the tunes, with arrangements provided by Lawrence, Cohn, and Manny Albam."