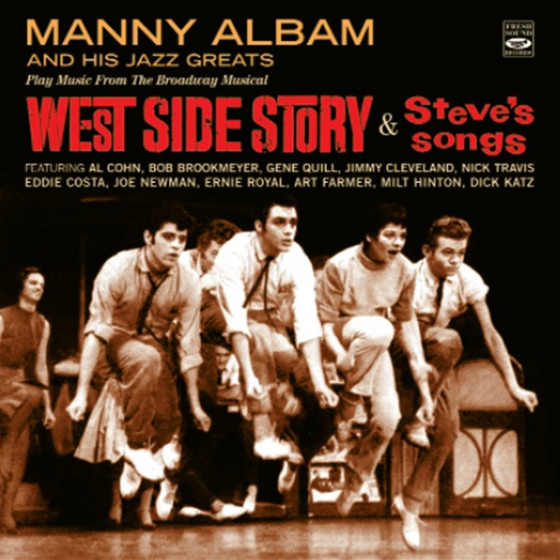 In the late 40s Emmanuel (Manny) Albam put away his baritone saxophone because it was getting in the way of his pen. From then on, he established himself firmly as one of the most skilled, perhaps the busiest, of all the freelance arrangers on the New York scene. Although he worked with great success in the pop field, he was usually associated with jazz. His originals for Basie, Herman, Gibbs, Ferguson, and other big bands are as familiar as the many remarkable LPs listed under his own name.

With "West Side Story", Albam achieved one of his greatest works. Most of the material is emotionally charged and moody, but the precise execution of Albams inspired arrangements, along with superbly apt solos, injected considerably more jazz life into Bernsteins provocative score. "Steves Songs", the second album on this CD, illustrates how unpretentiously Mannys arrangements married swing to function. Tasty.

All arrangements by Manny Albam

"Arranger Manny Albam was a logical choice to lead a large ensemble performing excerpts from the huge Broadway hit West Side Story. With an all-star band that includes Gene Quill, Ernie Royal, Joe Newman, Jimmy Cleveland, Al Cohn, Hank Jones, Bob Brookmeyer, Milt Hinton, Eddie Costa, and far too many others to list, Albam successfully transforms Leonard Bernstein's imaginative score into cool jazz. Since there are multiple musicians for most instruments, it is unclear who is soloing much of the time, though Gene Quill's laughing alto sax and Hank Jones' piano stand out in the opening "Prologue and Jet Song." Of particular interest is Albam's method of combining several different themes in the "Finale." Originally issued on Coral, with later reissues on Vocalion and Decca, this is easily one of the best of many jazz LPs saluting West Side Story, though it may be tougher to find than most of the others."

"Steve Allen is often dismissed by jazz critics as a prolific tunesmith who cranked out few memorable songs. That notion is easily cast aside, particularly with this brilliantly arranged recording of a dozen of his works by Manny Albam. "Mister Moon" is a cheerful, brisk number, featuring a brass section consisting of Gene Quill, Al Cohn, Frank Socolow, and Gene Allen. The equally upbeat "South Dakota" showcases three of the four trumpeters present, including Ernie Royal, Nick Travis, and Art Farmer. Pianist Dick Katz is interspersed between riffs by the brass and reed sections in the saucy "An Old Piano Plays the Blues." Some of the other outstanding musicians on this record are Milt Hinton, Bob Brookmeyer, Osie Johnson, and Eddie Costa. This difficult to find album is an excellent example of both the compositions of Steve Allen and the arrangements of Manny Albam."

Both by Ken Dryden -All Music Guide