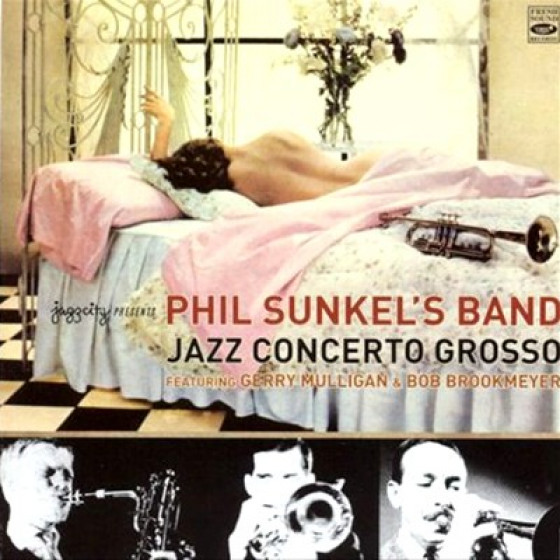 Phil Sunkel, cornet and trumpet player, was born in 1925 in Zanesville, Ohio. He played with the Claude Thornhill, Charlie Barnet, Stan Getz, Sauter-Finegan, Gerry Mulligan, Gil Evans and Tito Rodriguez bands. Leaving his role as a soloist aside, Phil mainly stood out as an arranger and composer of talent, being these recordings his most celebrated works and the only ones he did as a leader.

My idea of a jazzband, he said is something between a small combo and a big band incorporating the good features of both. Here we have the flexibility of a small group which allows the soloist a maximum of freedom, plus the color and drama produced by the different ensemble sounds.

Tracks #1-10, from the album "Maelstrom"
(originally a Paramount release)

"Phil Sunkel's name is unjustly missing from a lot of jazz reference works, though his considerable resume as a sideman includes recordings with Hal McKusick, Al Cohn, Lawrence Brown, Urbie Green, Gerry Mulligan, Erroll Garner, Jimmy Giuffre, Lee Konitz and Gil Evans, to name only a few. This first-call trumpeter evidently only made two records as a leader, both of them for ABC-Paramount in the mid-'50s. This album was the first under his own name, with a tentet including baritone saxophonist Gene Allen, alto saxophonist Dick Meldonian, trombonist Gene Hessler, and trumpeter Al Stewart. Sunkel's precise trumpet solos never fail to swing yet don't resort to showboating. His cool arrangements are comparable to those of Gerry Mulligan and Bob Brookmeyer, with most of the music devoted to Sunkel's tasty originals."

"Although Gerry Mulligan and Bob Brookmeyer get top billing on this LP, the leader, composer, and arranger of all three compositions is cornetist Phil Sunkel. The full 15-piece band is heard on the nearly 16-minute "Jazz Concerto Grosso," with the full band supporting the solos of Mulligan (baritone sax), Brookmeyer (valve trombone), and the leader. The shorter pieces from the following day's session feature a septet with totally different personnel, except for the three major soloists. All of the music is enjoyable and falls clearly into the cool jazz genre, but it has languished in obscurity like Sunkel, though he was later a member of the acclaimed Gerry Mulligan Concert Jazz Band. This long deleted record will be somewhat difficult to locate."

Both by Ken Dryden -All Music Guide