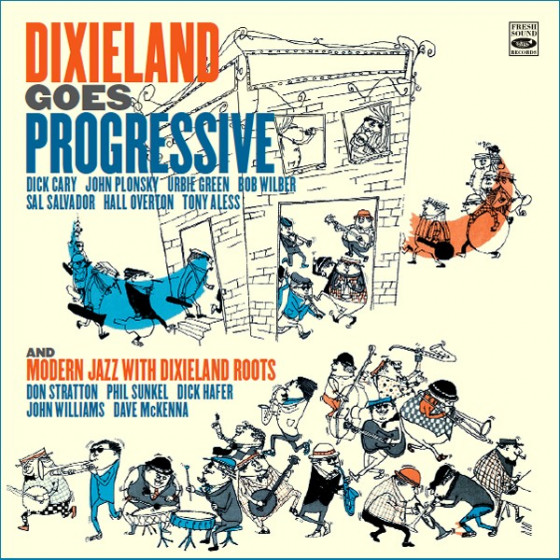 “Progressive Dixieland” is a term which would appear to be self-contradictory, the two words being often used individually to describe two different conceptions of jazz. Judged by their work on Dixieland Goes Progressive, Dick Cary and John Plonsky must surely be listed as two of the brighter arrangers in the field of jazz history. Given identical assignments—the refurbishing of Dixieland standards in the manner of progressive jazz—they both accepted the challenge and came up with a fresh concept of old music which is astonishingly pleasant and thoroughly amusing, which seems to indicate that there is a point at which both concepts and sounds can come together without being out of context with one another. Throughout the album, men like Urbie Green, Sal Salvador, Hall Overton, Tony Aless, Johnny Glasel, Don Arnone and, of course, Cary and Plonsky themselves, are consistently wonderful.

On Modern Jazz with Dixieland Roots, Don Stratton and Phil Sunkel went about adapting chiefly Dixieland opuses to their own use, and they wrote two originals apiece. First they assembled a group with unique instrumentation, yet one based firmly in jazz history. Two trumpets lead the way here—lead it brightly and weavingly and with sensitive interplay. Abetting them is the muscular tenor saxophone of ex-Woody Hermanite, Dick Hafer. Rhythm section is bassist Chuck Andrus, drummer Karl Kiffe, and Dave McKenna and John Williams splitting piano chores. The set swings, and the men responsible are clearly modernists, with roots not only to some extent in Dixieland, but more tellingly in the blues and in the best of the swing era.

"The two 1956 sessions made up an album called Modern Jazz With Dixieland Roots and the 1957 dates were combined as Dixieland Goes Progressive. In both years one session is superior to the other. The two trumpets of Stratton and Sunkel can’t match the Stratton-Hafer team because Hafer is better than both the brassmen. His personal adaptation of Lester Young’s approach has more emotion than most who were influenced by Young and his solos are of very high quality. The Dixieland roots are actually hard to detect here and only three themes belong in that field but both pianists are excellent and the swinging rhythm sections make up for the trumpeters’ lack of distinction.

Dixieland certainly provided the repertoire for the 1957 sessions and Cary’s arranging has a sophistication which Plonsky’s lacks. In fact some of Cary’s textures, with the tuba blended in, are remarkably similar to sounds created by Gil Evans a year later for his New Bottle Old Wine album. It’s fortunate that Urbie Green was present on both dates here because his ability to combine earthy strength with technical brilliance made him ideal for these attempts to reshape Dixieland. Plenty of arranging combined with soloists and rhythm sections reflecting later trends certainly make this music interesting though nine of the dozen tracks last less than three minutes which means solos are mostly brief. Wilber, of course, doesn’t sound particularly “progressive” but Sal Salvador (immortalised in the film Jazz On A Summer’s Day) certainly does and so does Jerry Segal at the drums. Four stars are awarded for Hafer’s and Green’s solos and Dick Carey’s arranging."