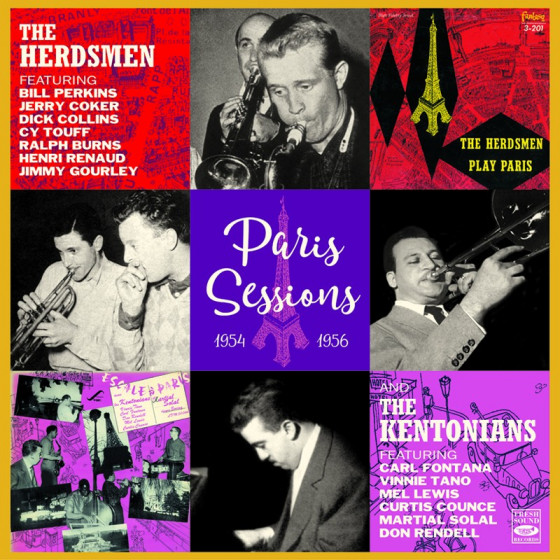 The recording sessions in this CD have much in common with one another, and respond to the stir generated in Paris among French fans and record producers by the visits of two of the top American jazz orchestras during their European tours: Woody Herman in 1954 and Stan Kenton in 1956. Some of the best soloists in each band were engaged to record for the French labels Vogue, Swing and Club des Amateurs du Disque.

The Kentonians recorded two 12” albums, and the main soloist on both dates was trombonist Carl Fontana. Trumpeter Vinnie Tano, bassist Curtis Counce, and drummer Mel Lewis joined him for the first one; along with them were tenor saxophonist Don Rendell —who was touring with Kenton’s band— and the young French star Martial Solal on piano. The second unit, under the direction of Fontana, featured Counce and Rendell, plus American trumpeter Dick Mills —who was then living in Paris— Renaud on piano, and Dutchman Wes Ilcken on drums.

The sessions were all improvised, without too much time for preparation, but the recordings captured the freshness of the soloists, who all had a balling time.


Personnel on THE THIRD HERDMEN BLOW IN PARIS (1954)

A UNIT FROM STAN KENTON’S BAND, DIRECTED BY CARL FONTANA (1956)

"How relaxed the French jazz scene was! Can you imagine a British record company sweeping a load of American musicians off the plane and into a studio to record them al fresco? That’s what first Charles Delaunay and then Daniel Filipacchi did here.

I dipped my toe in the water with the (1) band on a 10” Vogue that came out over here. This was a civilised but mightily swinging band with Perkins outstanding and subtle stuff from the other tenors, Hafer and notably Jerry Coker (in the day I had a brilliant jazz primer by this fine man, but alas it’s long gone). Burns binds his group together, but Renaud was no slouch. Collins was kept for his delicate solo work, and the fractious Touff was certainly good at swinging, despite his ridiculous bass trumpet. The (1) session had only a few penciled lead sheets to work from, but for the second Coker had sweated on the substantial Embarkation and Burns had come up with the excellent Wet Back (Chuck Flores’s nickname).

Don Rendell is the outstanding soloist on the 1956 tracks and his Waterfront is the best performance in the medley. Counce had Foolish Things. He left Kenton when Fontana told him “You’re leaving this band. Whether you leave horizontally or vertically is up to you”. You didn’t mess with Carl. He’s his majestic self here.

Vinnie Tano’s family lived in the black ghetto in Philadelphia, the poorest of the poor. He hustled to keep the family alive and at the same time taught himself to play the trumpet, although he had no education and didn’t learn to read or write. He was one of the most competitive players around, and always thought he could play a better solo than the next guy. Often he could, and you can hear his great strength and range here, even though you’ll find no mention of him in the jazz books."

"What did big band sidemen between tours? Why, they went to Paris, of course, as these two cds filled with all stars and Left Bank locals demonstrate.

The first disc has members of Woody Herman’s Third Herd of Dick Collins/tp, Cy Touff/btp, Bill Perkins/ts, Dick Hafer/ts, Jerry Coker/ts, Ralph Burns/p, Jimmy Gourley/g and Chuck Flores/dr team up with the beret-wearing Jean-Louis Viale/dr, Jean-Marie Ingrand/b  and  Henri Renaud/p. Touff is wonderfuly on “The Gypsy” and the team swings with Hafer and Perkins on “Pot Luck” and “Thanks For You.” A nine minute “Ballad Medley” features a breathy Perkins as well as gracious Touff, while the rhythm team is lithe and supple.

The Kentonians of Carl Fontana/tb, Curtis Counce/b, Mel Lewis/dr, Vinnie Tano/tp, Don Rendell/ts, Dick Mills/tp and Wels Ilcken/dr join with Gaul  pianists Martial Solal and Henri Renaud for a pair of bright swing. With Renaud, Fontana leads three bluesy boppers that stretch out from 7-12 minutes, with Renaud in rich form on “Daniel’s Blues” and the team sizzling on “Scrapple From the Apple.” Some fun polyphony takes place with the Solal-lead team on “The Way You Look Tonight” with the Frenchman in rich form on “I Remember You.” The team gives a Basie feel to “Jive At Five” with a snapping Counce and Lewis and the horns shine brightly on “Why Not” and “Steeplechase”."