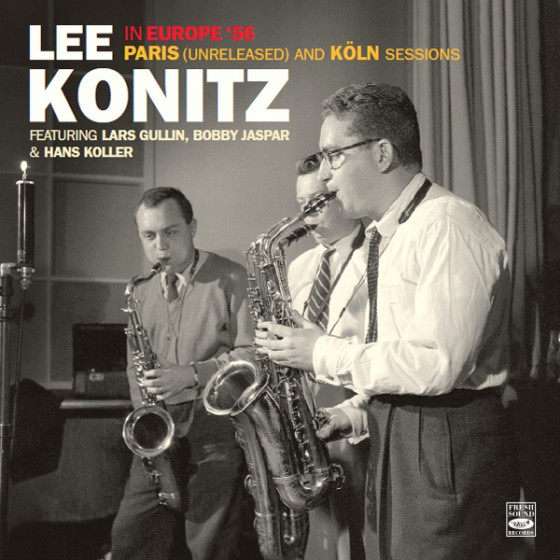 American composer and alto saxophonist Lee Konitz left NYC for Germany in January 1956 for a series ofconcerts and recordings organized by producer Gigi Campi. Konitz was a major figure in the “cool jazz” movement for which German players then had more affinity. Campi also called the great Swedish baritone saxophonist Lars Gullin, another “cool” exponent who along with Konitz was billed as guest soloist with the New Jazz Stars group led by Austrian tenor saxophonist Hans Koller.

Konitz and Gullin were also invited to perform in Paris, where they played at Club-Saint Germain, and also recorded —with Bobby Jaspar, René Urtreger, Pierre Michelot, and Christian Garros— an unpretentious studio blowing session organized on January 16th by producer Marcel Romano. Planned as part of an LP, the recording remained unreleased and is heard here for the first time.

Then, on January 17th Konitz and Gullin were joined by Koller’s group in Köln for the first of two recording sessions at BFN Studio that Gigi Campi produced—the second took place on the 21st, and both were issued as three 45 rpm by the Italian label Carisch.

Overall, these Paris and Köln sessions, offer a fascinating meeting of Lee Konitz with some of the best European “cool school” minds, full of lyricism, melodic improvisation, fresh variations, thoughtful interaction and fine control of dynamics.

Personnel on the PARIS (Unreleased) Session

Personnel on the KÖLN Sessions

"At the height of his West Coast 'Cool' days, alto saxist Lee Konitz took a tour of Germany in January of 1956. During that time, he recorded material in Paris and Koln as well as a concert in Koln, with Eurpoean jazz starts including Lars Gullin/bs, Rene Urtreger/p, Sacha Distel/g, Pierre Michelot/b, Christian Garros/dr and American Bobby Jaspar.

The three lengthy songs from the  Paris session have never been available before, and they are a delight. Konitz is in airy form and the Mulligan-inspired Gullin is hip as all get out on a 13 minute “Now’s the Time,” While the three reeds deftly bop on “Half Nelson” and bear down on “Ablution.” Nine songs from the Koln studios include Koller on the tenor for a breathy “Variations No. 8” and the reeds are in rapture for “En Rodage, ” “Stephany” and “Lee-La Lu.” For the January 14, 1956 Koln concert, Koller is replaced by Herb Ellis toned Attila Zoller and he swings with aplomb during a snazzy “Broadway” with Konitz creating cirrus clouds of saxophone during “Zoot.” Delightful-Lee received!"