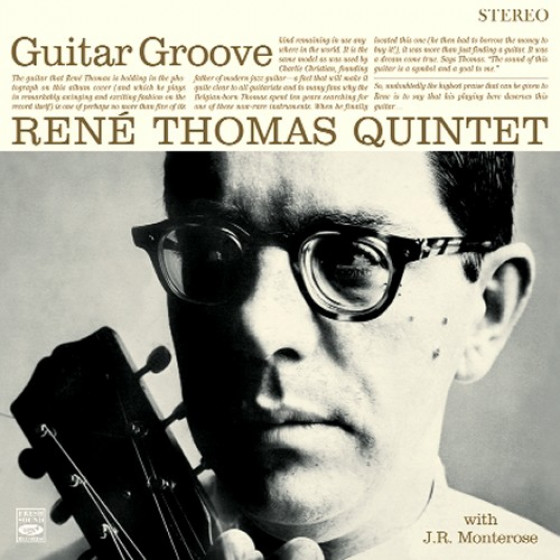 In 1960, Belgian guitarist René Thomas (1926-1975) had his much-anticipated leader debut in the US with the album “Guitar Groove”. He had appeared on record before, on Toshiko Akiyoshi’s “United Notions” (included here as a bonus) and on Sonny Rollins’ “Big Brass”, but “Guitar Groove” was a more informal encounter. It showcases René at great length, establishing him as one of the most fluent and articulate guitarists in jazz.

With Monterose and Thomas matched in fluency and expressiveness, the tenorist swinging with typical forcefulness, it has to be said that the set also provides ample scope to display Thomas’s inventive and emotional playing in ballads such as How Long Has This Been Going On? and Ruby, My Dear. Throughout, he is imaginative and full of confidence, developing his solos, regardless of tempo, with an unpretentious, swinging conviction that adds credence to the belief that he deserved much more eminence and praise than he ever received.

"Belgian-born guitarist René Thomas relocated to Canada in 1956. He was a favorite of many American jazzmen, including Sonny Rollins with whom he performed and recorded briefly in 1958. In that same year, he was a member of an international all-star group led by pianist Toshiko Akiyoshi on a recording titled United Notions. Among the other players on the program are Doc Severinsen on trumpet, Nat Adderley on cornet, Rolf Kühn on alto sax and clarinet, Bobby Jaspar on tenor and baritone saxes, Akiyoshi on piano, Thomas on guitar, John Drew on bass and Bert Dahlander on drums.

Two years later he recruited tenor saxophonist JR. Montrose, pianist Hod O’Brien, bassist Teddy Kotik and drummer Albert “Tootie” Heath for his first American release, Guitar Groove. Both of these fine albums are found on Guitar Groove. From the evidence on this disc, the respect that Thomas engendered in his contemporary jazzmen is understandable. He is a fluid and creative player who has an innate sense of swing. Unfortunately, he was cut down by a heart attack at the age of 48, and his recorded legacy is relatively sparse for a player of his talent. This album contains some of his finest recorded work, and will be a popular addition to any jazz collection."

"European guitarist Rene’ Thomas isn’t exactly a household name in most jazz circles, but if you dig deep, your appreciation will grow. He’s got a sound and delivery similar to Jim Raney and Tal Farlow, and has graced bands and recordings lead by Stan Getz (such as Dynasty), Chet Baker and Sonny Rollins. He died too early at 47 back in 1975, so it’s understandable for him being under the radar.

Hopefully, this album him on two sessions will pique your interest. He’s caught in a 1958 session under the leadership of bopping pianist/composer Toshiko Akiyoshi, who brings Thomas together with a pre-Tonight Show’d Doc Severinson/tp, Nat Adderley/ct, Rolf Kühn/cl-as, Bobby Jaspar/ts-bs-fl, John Drew/b and Bert Dahlander/dr. Thomas is glorious on “Broadway” and teams up well with the leader on” Swingin’ Till The Girls Come Home.” Having Jaspar on bari on “United Nations” is a bonus as well.

Thomas leads his own band in a 1960 studio recording with the impressive team of JR Montrose/ts, Tootie Heath/dr, Teddy Kotick/b and Hod O’Brien on a collection of standards and originals. Thomas is clean and clear as he veers like AJ Foyt on “Like Someone In  Love” and glistens like  polished brass on “How Long Has This Been Going On?”. Montrose, perpetually forgotten and underrated, is in muscular form, sizzling on “Spontaneous Effort” and flows like lava with Thomas on a wonderful “Ruby, My Dear” while bouncing with delight on “Milestones.” This album is gonna give you bragging rights for bringing his name up in a conversation."

"European guitarist Rene Thomas made his debut as a leader with this 1960 date for the Jazzland label. Residing in Quebec at the time, Thomas is joined by an American cast of characters on Guitar Groove. In the bass chair is Teddy Kotick, one-time member of the Horace Silver and Bill Evans groups. Tenor saxophonist J.R. Monterose joins the quintet, fresh from the dates for his own The Message. Albert "Tootie" Heath, then in between stints with J.J. Johnson and the Jazztet, lends his drum work, and Hod O'Brien fills in the gaps on piano. These are session musicians of the highest order: skilled improvisers who always know when to make concessions to a group setting.

In addition to the three original numbers on hand, the quintet dips into the book of jazz standards, rendering Burke and VanHeusen's "Like Someone in Love," Gershwin's "How Long Has This Been Going On?," Thelonious Monk's "Ruby, My Dear," and Miles Davis' "Milestones." At times the players are almost too polite, though the spark provided by Heath's snare punctuation and vibrant fills generally keep the band on the ball. "Thomas" himself is in fine, refined form, his sound an exquisitely enunciated flow of cool tones. He reserves "How Long" for himself, stretching out over six minutes, accompanied only by Heath's brushwork and Kotick's reserved bass playing. Though he's made substantial contributions to dates with Chet Baker, Sonny Rollins, Stan Getz, and others, Guitar Groove is arguably Thomas' strongest date as leader."

"This very obscure record is not the first date as a leader by Toshiko Akiyoshi, but it is a gem worth acquiring. The pianist is joined by an all-star group that includes either cornetist Nat Adderley or trumpeter Doc Severinson, clarinetist/alto saxophonist Rolf Kühn, flutist/tenor saxophonist/baritone saxophonist Bobby Jaspar, guitarist Rene Thomas, bassist John Drew, and drummer Bert Dahlander. There's a feeling of camaraderie as a mixture of head arrangements ("Broadway") and written charts ("Strike Up the Band") of standards, as well as original material by the participants (Jaspar's tasty "Sukiyaki" and the leader's "United Notions"), unfold before the listener. The record begins on a slightly campy note as each musician, following the leader's example, introduces himself in his native language. Long out of print, this bop date will have jazz fans scouring cyberspace and auction lists in search of it."