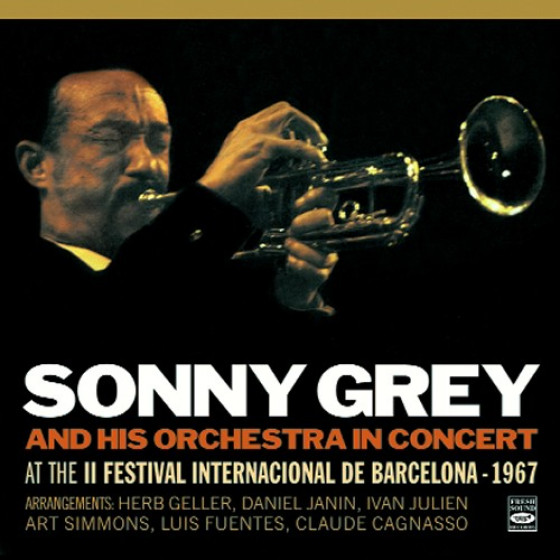 Sonny Grey and His Orchestra in Concert

Trumpeter Sonny Grey (1925-1987) was part of a new breed of Jamaican musicians that emerged in the late 40s, including such greats as Joe Harriott, Dizzy Reece, Shake Keane, Harold McNair, and Wilton “Bogey” Gaynair. In 1951 he visited England with Joe Harriott as part of the “Jamaica All Stars”. Two years later he moved to Paris, where he spent the better part of a decade as a sideman in various orchestras and at jam sessions.

His greatest triumph would come in 1963, when he organized and led his own Big Band. It had verve and spirit, reflecting a leader able to get the best of his men. His fame grew rapidly despite the continuous personnel turnover, and the band generally swung effectively, aided by a diversified book, vibrant soloists, the ensemble’s all-embracing warmth and the general sense of good feeling it conveyed.

In November 1967, Grey received an invitation to play at the II Festival Internacional de Jazz de Barcelona, where his full-strength band delivered a fervent performance —before an enthusiastic audience—in the only album they ever recorded. In addition, this CD includes some previously unreleased recordings from a concert a year later in Aix en Provence.

In these recordings Sonny Grey’s big band shows the vitality and wild, joyous abandon of all the best American orchestras, with its leader conducting and soloing with effervescent intensity throughout.

"Sonny Grey is a name that is probably unknown to American jazz enthusiasts. He was a Jamaican-born trumpeter and bandleader who spent most of his professional career in France. During the 1960s and early 1970s, he led a powerful modern big band along with playing small group gigs and spending a short time time playing on the legendary Francy Boland/Kenny Clarke Big Band. On Sonny Grey and his Orchestra in Concert, the Grey aggregation is captured in live appearances in Barcelona in 1967 and Ax-en-Provence in early 1968.

The first ten tracks are from the Barcelona gig, and show off the band at its best, a tight, hardswinging group with fine soloists. The last six selections are not quite as crisp due to extensive personnel changes, but still excite. This is an interesting introduction to a relatively obscure band that has fortunately been recorded for discovery of it by future listeners."

"How does Fresh Sound find these guys?!?

Jamaican born Sonny Grey is one of those guys like Dizzy Reece and Joe Harriott who were impressive on the trumpet, but never got top billing. Grey spent his time with the Kenny Clarke-Francy Boland Big Band in Europe, but set out on his own for these two big bands from 1967-68. The big bands don’t include anyone you might be familiar with, but the charts, some by Herb Geller, are quite impressive.

And Grey had big ears. The band sounds hip on a take of “Work Song” and an arrangement of Charles Mingus’ “Nostalgia In Time Square” sparks with excitement. You get some swinging little ditties such as Neal Hefti’s “Cute” or Bud Powell’s “Budo,” and then Grey pulls the plug and has the band go wild on a ten minute gallop on “Tenor Madness” with some wild sax work. Grey’s own “Antony” shows some muscle as well, and Grey’s horn, which is featured on most of the pieces, is Buck Clayton rich. If you’re a big band fan that wants swing with style, get a load of this guy."