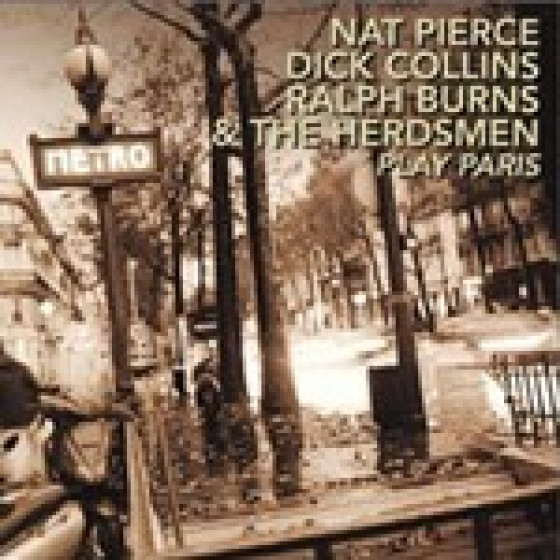 Bassist Red Kelly remembers the Woody Herman Third Herd's triumphal tour of Europe in 1954: "We weren't used to that kind of adulation. We were treated like rock stars are today. They tried to get the buttons off of our coast and all that stuff." The fans were not alone in their enthusiasm. The French critic and impresario Charles Delaunay herded several of Herman's sidemen into a recording studio for two small-group sessions that illuminated the talents of saxophonist Bill Perkins, bass trumpt Cy Toouff, trumpeter Dick Collins, pianist Ralph Burns, and other solist from the band, along with promiment Fench musicians. The same year, in San Francisco, Collins was featured in recordings with several of his colleagues from the band. The Paris and San Francisco sessions give us stimulating extracurricular music by some of the talented young musicians Herman assembled during one of his greatest periods.

Recoded at the Marine's Memorial Auditorium, San Francisco, on January 27, 1954.

"Here's the deal on this set from "the Herdsmen": Dick Collins, Red Kelly, Ralph Burns, and a few other cats went over to Paris from Germany while they were playing with Woody Herman's Third Herd, the first to play Europe in 1954. All the players involved - Nat Pierce, Cy Touff, Jerry Coker, Bill Perkins, Dick Hafer, Chuck Flores, Jimmy Gourley - were either currently in the Third Herd or kicking around Europe anyway. Why have you heard of so few of these people? Simply because they are footnotes in jazz history, not major players. This is not to imply that they are not quality musicians, just that they were, most of them, workmen in various bands of the era, from Herman to Shorty Rogers to Kenton to Charlie Ventura, etc. Which is the exact importance of this wonderful, swinging West Coast-style date made in Paris for none other than French author and critic Charles Delauney. Trumpeter Dick Collins is who made it all happen after playing with the Dave Brubeck Octet, and studying in Paris with Darius Milhaud, the French composer who Brubeck and John Lewis studied with when he was in residence at Mills College later in his life. Collins picked up Kelly, Touff (bass trumpet!), Perkins (tenor), Hafer (tenor), pianist Henri Renaud, and drummer John Louis Viale-Coker.

Pierce, Gourley, and Flores played on the next session a couple of days later. The program is an amalgam of originals, standards, and tunes literally unknown before or after this session, not credited to anyone. This is a blowing date. The arrangements are loose, the swing value is high, and there is a feeling of relaxation and reckless abandon found on few recordings from this period.

This is West Coast jazz with a European elegance courtesy of Renaud - one of the greatest pianists in any genre France ever produced. Most notable tracks here are the covers: Basie's "The King," Lester Young's "Blue Lester," Shelton Brooks' "Some of These Days," and one by Pierce - who also did some arranging on "Honey Baby." A hot date, one that is welcome as a reissue on CD."