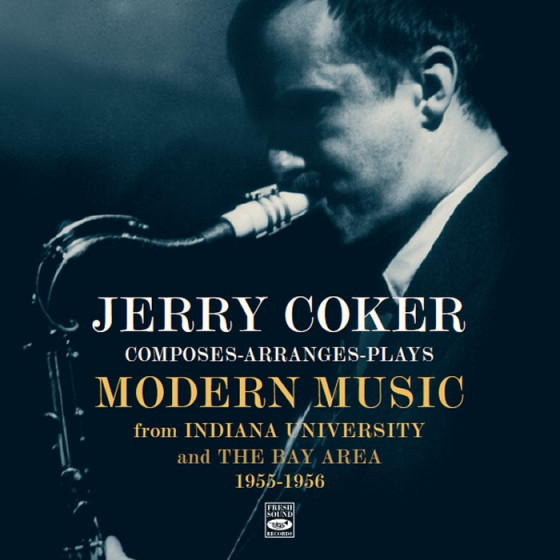 Born in 1932, tenor saxophonist Jerry Coker first emerged as a major talent in Indiana University’s brilliant jazz clique of the early ‘50s. While he was still a student he joined Woody Herman’s Third Herd, leading to a year performing, recording and, in the spring of 1954, a European tour. Returning to Indiana that summer, he was at the heart of the university’s thriving jazz movement which, in July 1955, recorded his album, Modern Music from Indiana University. Leading some talented students, Coker, as producer, wrote all the arrangements – with echoes of the Four Brothers sax sound – while his solo work revealed an affinity for Lester Young.

In 1956, settled in Oakland, he began to make a name himself as performer,
composer and arranger, and joined Rudy Salvini’s rehearsal band. He also recorded with them and with his own quartet in November for San Francisco Jazz Records.

While the Kenton band was playing in the Bay Area, Coker briefly replaced the injured Bill Perkins, but, despite his considerable reputation as a soloist, after the spring of 1957 his appearances on concert and on record have been rare. He has since mostly devoted himself to teaching and writing, which has obscured his talents as a player—a pity, as these recordings show just how good he was.

"Jerry Coker should have been a household name (and maybe he will be among readers after this post). A composer, arranger and tenor saxophonist from Indiana, Coker in the 1950s and beyond had a beautiful ear and gorgeous sound. Coker recorded only one album and a few tracks as a leader in 1955. He also recorded as a sideman small groups led by Mel Lewis and Nat Pierce in the mid-'50s as well as a big band led by Rudy Salvini. In the early 1950s, he recorded and toured with Woody Herman's Third Herd and he recorded with Clare Fischer's band in the early 1960s. Except for two albums in the early 1980s (A Re-emergence and Rebirth for the Revelation label), that was pretty much it.

Coker played with Stan Kenton in 1957 and then he spent much of his career as an exceptional educator. He taught at the Monterey Peninsula Junior College in 1963, at Indiana University as head of their jazz program and then, in 1966, at Coral Gables University in Miami, developing first-rate BA and MFA degree programs. He left in 1972.

While in Miami, Coker played gigs for entertainers, including Frank Sinatra and Tony Bennett. Next came Pembroke State College and Duke University before he settled with his wife in Knoxville, Tenn. Over the course of his career, Coker wrote 20 jazz education books and is a member of the International Association of Jazz Educators Hall of Fame. Coker is still with us today.

Fortunately for us, Fresh Sound Records has gathered many of Coker's recordings between 1954 and 1956 on a single CD entitled Jerry Coker: Modern Music From Indiana University and the Bay Area. It is a stunning collection of jazz recordings that will leave your jaw hanging. The sound is a perfect blend of West and East Coast jazz styles during this period, and Coker's composing and arranging was extraordinary. It's highly melodic with tasteful harmony parts and exquisite blowing by everyone on the dates.

Coker's reed writing was so gorgeous you'll want to cry. Heartfelt and fully maximized, the arrangements have a sensitive passion for the harmonized saxophone sound while the musicians have a nimble Four Brothers feel. The players on the session were all students at Indiana University, where Coker had attended college.

Coker was masterful, and in an ideal, selfish world, he would have moved to Los Angeles, recorded dozens of albums in the studios and written for television. Then again, hundreds of fledgling jazz musicians studying at the various universities where Coker taught would be poorer for it. I'm just thankful we have what we have here. So gorgeous."