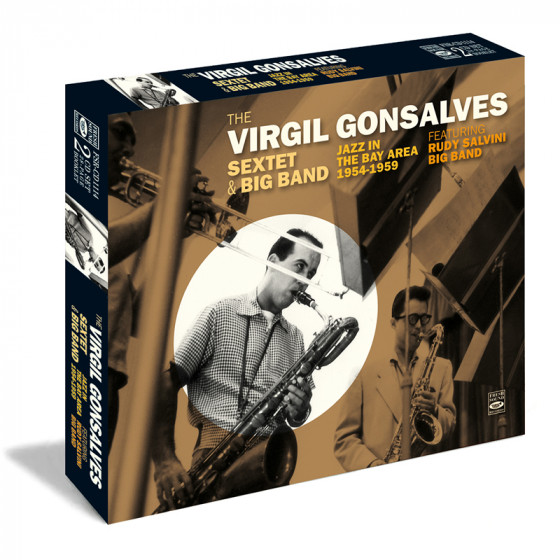 This CD set includes a 28-page booklet with an essay by the producer, photos, illustrations, detailed personnel, recording dates, and the original liner notes from the albums.

Virgil Gonsalves (1931-2008) was a gifted baritone sax and bandleader. However, despite his undeniable qualities, his name is often missing from the “best of” lists of his instrument, most likely because his fame never really did go beyond the Bay Area.

In 1952, Virgil introduced an artfully arranged sextet at concerts and club dates, contributing to the development of a nascent modern jazz scene in San Francisco. From 1955-1959 the sextet worked long stints at well known clubs such as the Black Hawk and the Jazz Workshop, and somehow his music represented a San Francisco style, a hybrid response to the jazz that had been brewing in Los Angeles and had already been labeled the West Coast style. Gonsalves himself was a huge fan of Gerry Mulligan, Shorty Rogers, and the fresh sound emanating from Southern California. In 1959 Virgil, always restless and enthusiastic, also organized a modern big band in collaboration with trumpeter Jerry Cournoyer, which was a well-conceived extension of his sextet.

Bandleader and trumpeter Rudy Salvini (1925-2011) was another indefatigable Bay Area musician, and teacher. In 1954, he organized his 17-piece rehearsal band. It was a young, Kenton-Basie derived band which, however, was extremely original in its arrangements, notably by Jerry Coker, Jerry Mulvihill, and Jerry Cournoyer. The band played casual concerts, and appeared weekly during two years at Oakland's Sands ballroom. In 1958 played at the first Monterey Jazz Festival, being hailed by jazz critics as one of the most exciting on the Pacific Rim.

Virgil Gonsalves and Rudy Salvini were two very importance driving forces of jazz in the Bay Area in the 50’s. With this compilation CD, we want to pay tribute not only to their talent as musicians and bandleaders, but also to their perseverance and their little remembered musical accomplishments, a true labor of love for jazz.

"It's no surprise anymore: Jordi Pujol stays on his label Fresh Sound presenting surprises. Virgil Gonsalves (1931-2008, not related to Paul Gonsalves) was a baritone saxophonist from San Francisco whose I had never heard of. But he appears to have an active career, both with his own groups as with the big band of trumpeter Rudy Salvini (1925-2011), another such largely unknown musician from the Bay Area.

This double CD collects 32 tracks that – according to Pujol – allow hear “that the modern jazz played” in San Francisco in the 1950s could rival what they were playing in Los Angeles.” Indeed becomes mainly in faithful West Coast style written and played: melodious and competent.

About the musicians involved, there are a few with more than local fame: Bob Enevoldsen, Buddy Wise, Lou Levy and Larry Bunker. Five shots of Gonsalves' big band from 1959 take a step to the (hard-)bop with titles like Benny Golson's Stablemates, Charlie Parker's Blue Bird and even John Coltrane's Moment's Notice."

"There is no jazz label out there that consistently resurfaces unjustly obscure and overlooked artists than Spain-based Fresh Sound Records. What? You get maybe 1-2 things a year from Mosaic and 3-4 from Resonance, but Fresh Sound puts out swinging things you’ve never heard of before every month. Each time I hear something like this 2-CD set by baritone saxist Virgil Gonsalves (1931-2008) who started his career with the orchestras of Alvino Rey and Tex Beneke, but eventually became a devotee of West Coast Cool, although a few hours north of Los Angeles in the Bay Area.

Gonsalves had a warm tone on the bari, a bit lighter than Mulligan and bopping more lithely than Pepper Adams. There’s a 1954 session in Hollywood with the likes of California boppers like Lou Levy/p, Bob Enevoldsen/vtb, Larry Bunker/dr, Harry Babasin/b and Getz-infused Buddy Wise/ts for a sleek  “Bounce” hip “Too Marvelous For Words” and a nice vibrato'd and darkly hued “Yesterdays”. Another Septet from 1955 in Hollywood includes another Getz fan in Dan Patiris/ts for some Shorty Rogers-inspired charts like “White Wash” with Gus Gustafson’s cymbals in overdrive on the dancing “Viva Zapata”. Both Gonsalves and Patiris glow on Lost World and they swing hard on “Fascinating Rhythm”. The 1959 sextet from SFO sounds a bit more modern, jamming through Jackie McLean’s “Little Melonae” bopping on “Sharon” and Gonsalves getting blue with pianist Merril Hoover on “Lover Man”.

There are a pair of big band sessions from Oakland and San Francisco, with the first one having Gonsalves part of the reed section in Rudy Salvini’s Big Band, for a Basie-muscular “Wail For Patrick” and a California Cool “Topsy Returns.” Gonsalves’ own big band has altoist Leo Wright floating on “Stablemates” while the team swings hard on John Coltrane’s “Moment’s Notice” and sways with a bluesy noir alley atmosphere on the aching “Blue Bird”.  Included is a hip little book with inside info as well as notes on all of the sessions. The Golden Gate was swinging!"