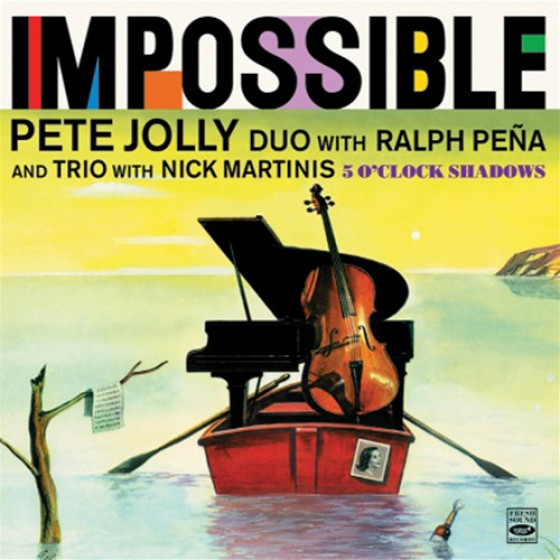 Pianist Pete Jollys command of his instrument in these recordings emphasizes something important about his playingthe fact that he had something personal, positive and real to say with it. Combining propulsive swing and great melodic charm with spirit, feeling and humor, his was an irresistible, full-bodied, warm-blooded, two-handed style whose vivacity of touch and clear, tangy quality of tone remain unmistakable.

In 1958 Jolly formed a duo with bassist Ralph Peña, an unusual move instead of the more traditional trio; the aim was to achieve greater cohesiveness and a more individual sound. The result was the sparkling 1959 album, Impossible.

A year later the duo became a trio when Nick Martinis joined them on drums for the equally engaging 5 OClock Shadows. But, whether in a duo or trio setting, Jollys distinctive, swinging touch and felicitous invention suffuses these sessions with a sinuous attractiveness undimmed by time.

"Pete Jolly had a better fate even though his decision to stay in Los Angeles (where he worked steadily for decades) kept him from showing up in jazz polls. Impossible/Five OClock Shadows (FSR 681) has his duet set with bassist Ralph Pena from 1959 and a 1961 trio outing with Pena and drummer Nick Martinis. Very much a two-handed pianist, Jolly had a joyful hard bop style that fit his name, and these outings feature him in prime form."