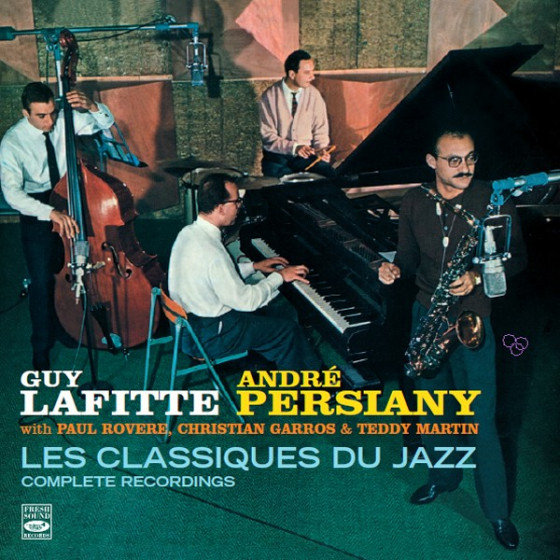 In the 1950’s, tenor saxophonist Guy Lafitte (1927-1998) was considered one of the luminaries of European jazz. In his playing he integrated the harmonic and rhythmic contributions of modern jazz to a more classical style in the lines of Buddy Tate, Eddie 'Lockjaw' Davis, Frank Wess and many others who were influenced by Coleman Hawkins and Hershel Evans.

For Lafitte, the emphasis of his playing was always in the strength of his sound, and in his swinging approach to the language of jazz, both qualities that earned him the Django Reinhardt Prize in 1954, the highest honor granted by the French Academie du Jazz. That same year he became the immovable tenor sax of the Parisian cabaret “Les Trois Mailletz”, where he played for almost four years in the company of his friend and pianist André Persiany “Pépé.” In him, Lafitte found his perfect partner, and their relationship was immortalized in these two volumes of “Classiques du Jazz,” gathered here for the first time.

They show Lafitte blowing with solid vitality and virility, carrying with his horn the bulk of these excellent sessions. Persiany doesn’t lag behind though: his piano is firm enough to keep up with Lafitte, and suave enough to counterbalance him. Furthermore, each tune gives him unrestricted opportunity for some eloquent soloing. As for the rhythm section it works gracefully and naturally, with Paul Rovère on bass, and Teddy Martin or Christian Garros on drums. All concerned enjoyed themselves thoroughly, a spirit that readily communicates here from start to finish.

""Lafitte started off as a gipsy clarinettist who took up tenor in 1947. He was a magnificent player who swung traditional and mainstream like he was Al Cohn. His big fat tone was known to British listeners only from the outstanding 10” LP he made with trumpeter Emmett Berry six months after the latest of these tracks. His outstanding style made him a target for Americans like Buck Clayton, Mezz Mezzrow and Dicky Wells when they were fraternising with the Gauls. He and Bill Coleman worked together frequently between 1952 and 1980. Persiany, who favoured the Milt Buckner locked-hands style was an early bopper who switched to mainstream with Coleman, Clayton, Mezzrow, Hampton and a basket of Americans before working in the States in the 50s and 60s.

They make a perfect mainstream partnership and the idea of taking on “classic” material was brilliant. They both swing and improvise beautifully, with Persiany hitting his best on Struttin’ and a dazzling up-tempo Southland where Guy melts the tarmac. Lafitte is perfect in everything he touches. The recording is excellent, considering that at this time the French had only just conquered the 78. My only complaint is that the tracks last not much more than three minutes. (Guy swings like mad on Ain’t Got Nobody but infuriatingly the track lasts less than two minutes), I’d have liked 10 minutes per title. But then that would have run to three volumes. And that would have been a good idea, too."

"The great feature of Spain-based Fresh Sound Records is that they find obscure artists of the 50s-80s that deserve a second (or even first) listen. Here are a pair of artists from France that show an influence of American swing and bop, but feature it in their own distinct style. The excellent liner notes give histories of the artists, putting their art into perspective of the time period.

Tenor saxist Guy Lafitte (1927-1998) had a big beefy sound akin to Coleman Hawkins and Buddy Tate, with a harmonic approach to the former, aptly displayed on this collection of mid 50s Parisian sessions co-lead with swinging pianist Andre’ Persiany. The remaining team of Paul Rovere/b and teddy Martin-Christian Garros/dr mix tradition with modern on this infectious collection of standards and war horses. Lafitte’s tenor growls with delight on “Savoy Blues” and oozes with lava warmth during “I’ll Never Be the Same.” Even on trad jazz themes such as “Basin Street Blues” and St. James Infirmary” he sounds modern and up to date, while Persiany shows an influence of  Erroll Garner two fisted stride when he takes the spotlight on “Nobody Knows When You’re Down and Out”  while soloing like he just came out of a saloon on “Careless Love” . The rhythm team is simpatico and snappy on “Chicago” while sophisticated and stylin’ on “Squeeze Me.” This one doesn’t disappoint!"