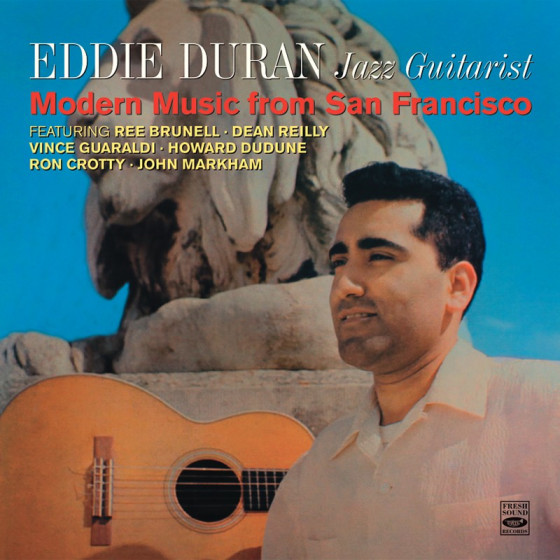 Born in San Francisco in 1925, Eddie Duran is an unfairly neglected jazz guitarist and a soloist full of imagination and heart who was already playing professionally at 15. To this day he considers himself an “ear player,” despite having played and recorded with Vince Guaraldi, Red Norvo, Cal Tjader, Charlie Parker, Stan Getz, George Shearing, Earl “Fatha” Hines and Benny Goodman, in the heyday of the San Francisco bebop scene.

Duran was 32 when he recorded Jazz Guitarist, his first album as a leader in 1957. His sound and approach were deeply rooted in the bebop tradition, with echoes of Tal Farlow. With Duran on this debut was Howard Dudune—a cleantoned young clarinetist and Getz-derived tenor saxophonist—with support from bassist Dean Reilly and drummer John Markham.

Completing this salute to a fine guitarist is a 1956 date where he and Reilly backed singer Ree Brunell on a relaxed stroll through four well-chosen standards, along with a 1955 trio session with Ron Crotty and Vince Guaraldi. Crotty was a part of Dave Brubeck’s early groups, while Guaraldi was one of the brightest young pianists of the local scene, and the trio produced some relaxed and swinging jazz.

San Francisco emerged in early 50s as one of the most important centres of jazz activity in the US and the musicians playing in these three sessions are a fine example of what the city had to offer.

"He’s still alive and kicking at 91, but Eddie Duran is one of the guitarists that somehow has been overlooked. This recent reissue by Fresh Sound Records uncovers some wonderful sounds in small group settings by the Bay Area guitarist, who rarely left his hometown except for some brief stints with Benny Goodman and Red Norvo.

All recorded in San Francisco, Eddie’s own quartet of Howard Dudune/cl-ts, Dean Reilly/b and J ohn Markham/dr include some intimate swing, with Dudune’s clarinet rich on “My Shining Hour” and “It Could Happen to You” while the tenor breaths warmly on ”Rise and Shine.” Duran himself delivers rich and clean lines, full of melodic ideas.  Vocalist Ree Brunell teams with Duran and  Reilly for cozy reads of “I’m Glad There Is You” and ”When I Fall In Love,” while a session with bassist Ron Grotty includes Vince Guaraldi on piano an celeste for a cool toned “The Masquerade is Over” and impressionistic “The Night We Called It A Day. This one is a subtle charmer."