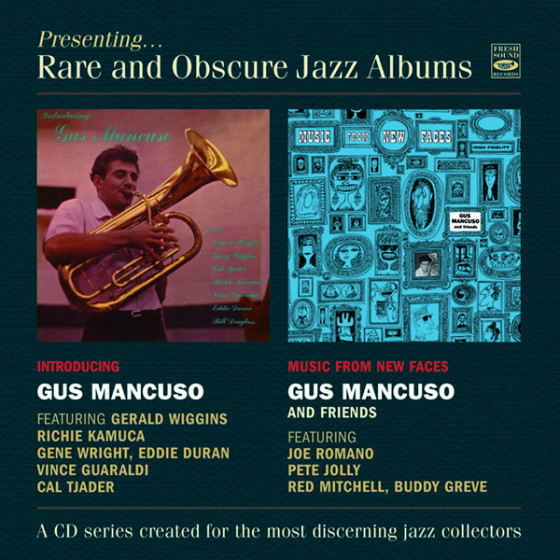 Introducing Gus Mancuso
Gus Mancuso could write, play several instruments and sing, but his main claim to fame came from being the first jazz musician to specialize in the baritone horn. He brought the instrument fully into modern jazz, playing it with swinging flexibility and heat. He used it to communicate his impressive conception, and had a beautiful sound at all tempos. It was Cal Tjader who introduced Gus to Fantasy Records, and the happy result was 'Introducing Gus Mancuso,' his first album as a leader. It was recorded on three dates during 1956, and Gus had strong support from three different groups. The first of the sessions took place in Hollywood with three members of Tjader’s quartet: pianist Gerald Wiggins, comping helpfully with his usual consistent improvisational ability; Gene Wright, one of the swigingest bass men available; and drummer Bill Douglass. The other two were sessions recorded in San Francisco with Tjader on drums and Wright keeping an inexorable, steady, propelling time. Pianist Vince Guaraldi, another longtime young cat associated with Tjader, shows how stimulating soloist he was, and Richie Kamuca is a further asset, blowing fluent and warm tenor solos on three of the tunes. For the last session, guitarist Eddie Duran delivers some very tasteful accompaniments and solos with a vigorous and relaxed style, which serve to brighten up this excellent album.

Music From New Faces
On his second album for Fantasy, Gus Mancuso’s selection of material is gratifying. It is a mix of originals and tunes that almost no one had touched before then. To play them, Mancuso put together a quintet with young tenor saxophonist Joe Romano, a paisan from his native Rochester in his impressive recording debut. His sound is full and eloquent, and he swings with such a driving power on the up tempo tunes that many who didn' know him yet were more than a little surprised. On the ballad Guess Who I Saw Today?, he plays with warm, light, but firm flowing phrases. On piano, Pete Jolly, aWest Coast fixture who shows off his swinging drive and percussive style, as well as a fine ability to get groovy when he solos. Red Mitchell is a bulwark as a soloist and as a timekeeper, and Jolly’s perfect companion. Drummer Buddy Greve takes no solos, but is an integral part of the proceedings, while Gus blows his baritone horn with an exhilarating, free-and-easy jazz feeling throughout this entire rewarding session peppered with good solos.

"If there’s one instrument that has not been explored in jazz, it has to be the baritone horn. That didn’t discourage Gus Manusco (1933-2021) who played the usually unwieldy instrument with the dexterity of a tenor sax. This single disc brings together a pair of 1950s album led by Mancuso that deserve a second and third listen.

Mancuso sure knew how to pick a supporting cast, as his 1955-56 sessions from Hollywood and San Francisco include West Coasters Gerald Wiggins-Vince Guaraldi/p ,Gene Wright/b, Bill Douglas-Cal Tjader/dr, Eddie Duran/g and smooth toned Richie Kamuca/ts. Mancuso blossoms on ballads  “Every Time We Say Goodbye” and “I’m Glad There Is You” while swinging mano a mano with Kamuca on uptempo pieces “And Baby Makes  Three” and ”Goody Goody”. The 1958 session from San Francisco includes Joe Romano/ts, Pete Jolly/p, Red Mitchell/b and B uddy Greve” with a gorgeously lyrical and agonizing “Guess Who I Saw Today” and a deft “The Boston Beguine”. This album is an undiscovered gem, coming from a time and era when artists were searching for new sounds and styles besides cacophony."

"In 1956, Gus Mancuso had a major ally in Cal Tjader. It was Tjader who brought Mancuso to the attention of Fantasy Records and, thanks to Tjader, he ended up recording two LPs for the label -- Introducing Gus Mancuso in 1956 and Music From New Faces in 1958. Introducing Gus Mancuso, his first album as a leader, is an incredibly promising debut. The music is swinging, inspired bop, which was hardly unusual for 1956; the thing that makes this LP so unique is the fact that Mancuso's instrument is the baritone horn. Not to be confused with the baritone sax, the baritone horn has played an important role in marching bands but has seldom been used as a jazz instrument. But Mancuso doesn't let that stop him; he makes the baritone horn sound perfectly natural as a jazz instrument whether he is swinging enthusiastically on "Goody Goody" or being lyrical and romantic on "Ev'ry Time" and the Jimmy Dorsey ballad "I'm Glad There Is You." Introducing Gus Mancuso was recorded at two different 1956 sessions -- one in L.A., the other in the Bay Area. The L.A. session finds Mancuso leading a quartet that employs Gerald Wiggins on piano, Gene Wright on bass, and Bill Douglass on drums -- whereas in the Bay Area his sidemen include Tjader (who is heard on drums instead of vibes), pianist Vince Guaraldi, tenor saxman Richie Kamuca, guitarist Eddie Duran, and bassist Gene Wright. Introducing Gus Mancuso is a fine debut all-around."

"In an ideal world, Gus Mancuso would have become a major name in the jazz world and built a huge catalog. Fantasy should have documented him extensively but, regrettably, he only provided two albums for the label -- and neither of them are well-known. Recorded in 1958, Music From New Faces was the second and last LP that the baritone horn player (as opposed to baritone saxophonist) provided for Fantasy. The focus of this excellent sophomore effort is eight songs from the Broadway hit New Faces. Being a jazz musician, Mancuso doesn't approach the material as theater music -- he interprets it, and songs like "The Boston Beguine" and "I'm in Love With Miss Logan" are transformed into instrumental hard bop. People who know these tunes from New Faces normally don't associate them with jazz, but Mancuso is imaginative enough to demonstrate that they can, in fact, lend themselves to improvisatory bop makeovers. And, thankfully, he has insightful, talented sidemen to help him make the LP a creative success -- on Music From New Faces, Mancuso leads a rock-solid quintet that employs Joe Romano on tenor sax, Pete Jolly on piano, Red Mitchell on bass, and Buddy Greve on drums. For many years, these performances were unavailable on CD."

Both reviews by Alex Henderson —All Music Guide