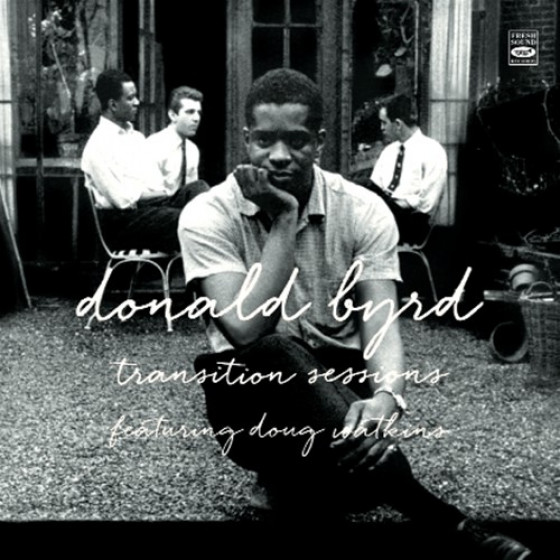 Donald Byrd (1932-2013) was among the most creative of the post-Miles Davis generation of jazz trumpeters, already acclaimed when, at 23, he replaced Clifford Brown in Art Blakeys Messengers in 1955. On Byrds Eye View, the first of these early Byrd studio dates for the small Transition label, he had his Jazz Messengers colleagues, Mobley, Silver, Watkins and Blakey, along with Boston trumpeter Joe Gordon, whose more outgoing style complemented Byrds supple, lyrical, rather introverted approach and fresh conception on an improvising session full of heated, crisp exchanges.

The second album, Watkins at Large, was bassist Doug Watkins first date as a leader and a great example of his confident soloing. Byrd is again in vividly dramatic form, with authoritative playing by Mobley and Burrell, sustained by a vigorous rhythm section nourished by the blues rooted drive of Watkins bass, the warmth and fluidity of Jordans piano and Taylors sturdy support. Intensity and skill are married to cohesive emotional purpose.

The last date is Byrds. On Byrd Blows on Beacon Hill, he is accompanied by the inventive Ray Santisis trio, with Watkins big bass and the swinging work of Jim Zitano delivering a thoroughly session (even on the uptempo If I Love Again) marked by Byrds thoughtful horn.

"[...] Donald Byrd's death last year has refocused attention on one of the musics most generous spirits, a tutelary figure whose later switch to soul jazz and funk led to a certain mild ostracism or neglect.

The trumpeter was still a Messenger when these recordings were made. Byrds Eye View was essentially made by the Blakey band, a session fraught with enough problems to put off a more superstitious man but Byrds view was capacious and inclusive. One senses the band engaged in slightly unfamiliar ways, with Watkins (who was credited with the December 1956 date) already unusually prominent on Dougs Blues and Blakey in a more sombre role than usual. Byrds trumpet part is thoughtful, almost subversive, in contrast to Gordons full-out wail, a contrast reprised on El Sino, a powerful composition by Harneefan Mageed (which I seem to remember is the name adopted by Charles Greenlee, who must have been temporarily retired from music at this point). Its a great track, with Mobley sitting out, and marred only by Silvers familiar shuffling of preformed licks. Everything Happens To Me is glorious, but as stark as a silhouette, not at all the pretty-pretty ballad it might have been; one of Byrds greatest solos. The Messengers spirit is reinvoked on Hanks Tune with horns locked over Blakeys rocket-fuelled accompaniment.

The other sets are marked by similarly adventurous instrumentation and a nice variation in sound for each track. Burrell, who organised the hometown date for Byrd that yielded First Flight, makes some impressive passes on Watkins date. The best cut is the one for just trumpet and rhythm, Panonica. The Beacon Hill engagement might seem to put the trumpeter in less illustrious company, but Santisis group plays a storm and not without subtlety as the two trio tracks bear out.

The early recording is an enticing glimpse of Byrd just emergent, and perhaps still conscious of his reputation as a precocious youngster coming of age. He was 24, all but, but as he put it, still learning. The presence of euphonium is noteworthy, but it was Lateef, someone else recently lost to us, who stole the date with a series of dark, songful solos."

"Trumpeter Don Byrd died last year, and it was hardly even noticed. At one time, he was THE hard bop trumpeter, bridging the gap between Clifford Brown, Lee Morgan and Freddie Hubbard. He is heard on a gazillion Blue Note and Fantasy albums in the 50s and 60s, worked with the Jazz Messengers, and even had some major selling albums. Here, we find him in his early years, and its a joy to hear such fervent and exciting music that oozes out from his horn.

With the disaster that Detroit is these days, its hard to imagine that at one time the Motor City was a hub of swinging jazz. On the first single disc, Donald Byrd leads a sextet of locals at a gig at The World Stage in good old Detroit on a August 55 gig, and it sizzles! And the hometown artists? How do you feel about Yusef Lateef/ts, Barry Harris/p, Alvin Jackson/b, Frank Grant/dr and Bernard McKinney/euph for a night of sounds? Lateefs tenor rolls in like a Mach Truck on the smoky Yusef and the whole band sways on Blues Walk. Byrds horn glows on Dancing in the Dark and some exciting street sounds frame the peppy Parisian Thoroughfare. Bop was in the air that night, and they come across as its emissaries!

The two disc Transition Sessionshas Byrd with his hometown buddy Doug Watkins/b in a variety of settings for the short lived Boston-based Transition label in 55 and 60. The Byrds Eye View session from 1955 is essentially the prototype of the Original Jazz Messengers with Hank Mobley/ts, Horace Silver/p, Art Blakey/dr, Watkins and Joe Gordon for an extra measure of trumpet. Byrd is once again a delight on the lyrical Everything Happens to Me while the mood is deep and riveting as Watkins delivers a hip intro to Dougs Blues before the horns get a chance to stretch out. Mobleys horn is as slick as fresh corduroy jeans on Hanks Tune and the two horns flutter together like harmonious and happy hummingbirds on Crazy Rhythm. Just as enjoyable is the 1956 session with Byrd, Mobley and Watkins with fellow Detroiter Kenny Burrell/g and Duke Jordan/p with Art Taylor/dr. Watkins is the leader on this session, and the grooves skip along well on Phil T. McNasty's Blues while Burrell swings like the juke joint is jumping on More of the Same. Byrd leads the last session on the 2 disc set on another 56 date, this one a quartet setting with Ray Santisi/p, Jim Zitano/dr and Watkins. Santisi gets the spotlight on a couple of tuens such as People Will Say Were In Love and Whats New and makes you wish he had more albums out on his own. Byrd, once again, takes the mantle for ballads such as Polka Dots and Moonbeans and glows like a sunrise on If I Love Again. Simply delightful music here."