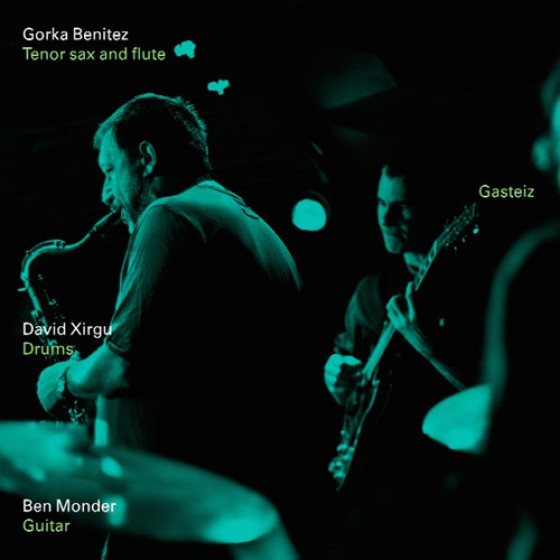 All tracks composed by Gorka Benítez

Recorded live at at Vitoria-Gasteiz Jazz Festival, on July 16, 2012

"Exceptional music from a bold and exciting trio, caught live up in the Basque country. Benitezs writing is a wonder and the opening A Matre Otra Vez is one of the most exciting sounds youll hear all year. Monder, just to keep the superlatives stoked, is the most compelling jazz guitarist of the moment, robust on that opening track, subtle on Pan Duro and Falsa Calma. Xirgus the only drummer you can imagine working for this music, his off-accents and fills always placed just a little unexpectedly. Get this one while its hot. Because its very hot indeed."

"This project brought together three musicians of notably strong character, individuality and creativity on the stage of the Teatro Principal Antzokia in Gasteiz (Vitoria) in the Basque Country: Gorka Benitez, tenor sax & flute; Ben Monder, guitar; and David Xirgu, drums. For the project Gorka took along eight of his compositions and established a dramatic, aesthetic setting which encouraged the kind of comfortable interaction he was looking for with his cohorts.

This challenging framework sparked off some of Gorkas most persuasively expressive and personal playing in recent years. These performances are marked not only by subtly recurring melodic and harmonic material, but also by calmly introspective, lyrical lines, explored in each musicians uniquely personal sound. The music runs the gamut from mellow to frantic, sometimes overlapping both extremes of the emotional spectrum.

The expressivity of Gorkas poignant tenor and his beautifullyarticulated dynamics lend authority to his work, aided masterfully by Monders imaginative arabesques and equally imaginative use of electronic devices, buttressed by the unobtrusive but propulsive drumming of Xirgu, a musician who always adds something special to any context of which he is a part.

On the opening A Marte otra vez, Gorka delivers the melody with passionate lyricism and unrelenting tension, but also adding a great deal of vitality. His work is full of vibrant, constantly on the move and suffused with a rough exuberance tempered with skill by Monder and Xirgu. Its a mix of tense calm and bitter agitation which projects a sense of drama in which the players blend their sounds to match their tonal qualities while improvising in between, and the results are full of contrast, light and shade.

In El Duelo Gorka states the theme in a characteristically melodic vein, but with a firm, punching attack, and he grows more exhilarating as he moves away from the melody. The movement changes to a first quiet passage which Monder, a master in his own way, explores with magisterial aplomb, and accelerates in intensity in its center section, full of rhythmic strength and timbral combinations. The personification of burning creativity, Monder delivers a coruscating, multi-noted statement, yet always in a cohesive and empathetic fashion, while Xirgu react beautifully behind him and the dialogue grows in corrosive urgency, before peace is restored with a simple and eloquent re-establishement the theme.

Pan Duro is a tune with a dramatic yet lyric curve of melody, played with emotional commitment by Gorka, which leads to a persuasively articulated and sensitively nuanced solo that holds together all the way, coming in and going out swinging. The equally personal Monder delivers some fluent and pleasant string passages, and the ever amazing Xirgu maintains and amplifies the impetus behind the music.

On the strongly flavored pop numbers like Una y mil veces and Goazen, Gorkas sax is a constant delight, whether caressing the melodic line or pushing it with dissonant chord clusters. Monders solos are full of rhythmic strength, and Xirgu proves that his jaz zinsights have made him an incredibly resourceful rock drummer, a quality which is particularly noticeable in Una y Mil Veces.

On the mellow and intriguing Falsa calma Gorka switches to flute, with Monder contributing cascades of arpeggios and colorful chords behind Benitez reverie. This develops into a second section of thematic variations with Monder giving a definitive guitar statement, in an arresting amalgam of unusual sounds and timbral combinations. Theres a beautiful diminishing of tension and tempo that leads to a recap of the romantic, clearly discernable main motif.

Idoia meanwhile, is a more conventional soothing statement of balladic proportions, a combination of sadness and beauty in which Gorka plumbs its emotional and dramatic core to discover its inner life, working around the themes opening line, and Monder extends it, inverts it, and asserts his unique mastery of the jazz guitar.

On the lilting swinging up-tempo of the closing Silbable, Gorkas playing is straight-ahead, warm and flowing with a volcanic quality building over an intensifying rhythm accompaniment which leads into a dynamic and tasteful drums interlude that proves, yet again, that Xirgus mind and heart are in perfect accord, before the trio goes simultaneously to the end of the concert.

The musicianship that this daring trio personifies resulted in a spirited set of performances that maintained a high level of engaged creativity throughout. Their music relies on its ability to communicate directly, with no concessions to gimmickry, in an intelligent and successful fusion of melodicism with an open-ended approach in which every note has a definite meaning.