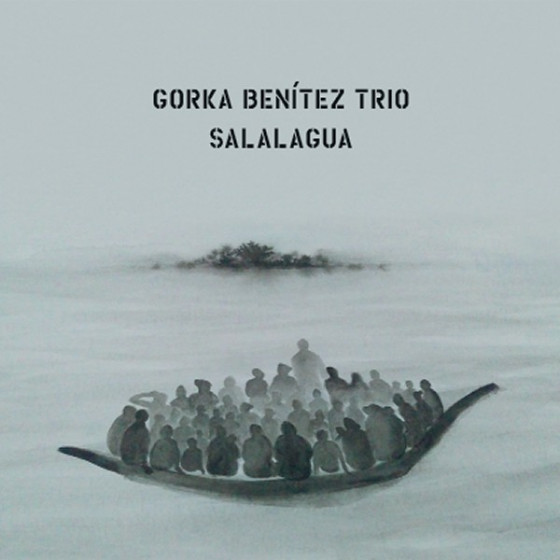 This isn’t the first time I start writing about Gorka Benítez. It’s not that I find writing about this much beloved and individual musician hard, mind you. But every time I think I have a clear description of Gorka in mind, words fail me: they fall short from what I actually mean to say. Where others explore new or old avenues to develop their ideas, Gorka forges his own path to the side, unconcerned by the business side of the music industry. He does so without regard for established aesthetics or musical tendencies because his particular style derives not only from his talent, but also from his sheer personality.

Gorka is a strong melodist with an unpretentious style full of sincerity, emotion and lyricism, a hard to find combination. When he takes his tenor saxophone and begins to blow, he often weaves into his solos tough, logical idea patterns, and never seems to be in a hurry to spout out all he’s got to say—his jazz comes out with collected strength and passionate conviction.

On stage, he is the personification of self-assurance, delivering a flow of positive energy and messages of solidarity, which he underlines with suggestive melodies, capturing the audience with his special kind of magic. He does not aim to impress or boast with his technique; there’s something much more simple at work, the kind of closeness that reaches you without effort but with raging intensity.

Whoever he is accompanying, Gorka never loses his solid identity, both expressive and melodic. Personality wise, at least on stage, he is somewhere between the musician who uses his instrument and the language of jazz to express his conceptual and creative ideas, and the poet who passionately describes all his experiences and feelings. His songs are little gems of musical logic. He creates his own universe and catches us with his music, which he usually plays with his longtime friends, guitarist Dani Pérez, and drummer David Xirgu. They groove beautifully together, and spread their empathic energy all over these trio performances. Some of their mutual understanding might be attributed to their shared open-mindedness.

Pérez is the trio’s anchor, who plays his guitar with an ability that goes beyond technique, building up transcendent and heartfelt patterns. His imaginative solos offer an alluring diversity of musical texture, tonality, and sonority. The ever amazing Xirgu is right there with his muscleman polyrhythmic exclamations, while Gorka unveils images with his saxophone or his flute.

No comparisons come to mind, which is a good thing, in this case. In his early years, reviewers and friends tried to find similarities between Gorka and this, or that other renowned saxophonist, but luckily, all their well-meaning praise had little effect on his playing. With each passing day, he is more and more himself, and consequently he has moved further and further away from any possible comparisons. Having molded his style organically through the years, he himself has slowly become a reference.

This CD includes the many sides of Gorka’s personality, not only as a musician, but also as a human being, and it is a cry for solidarity. Salalagua is his tribute to all the people who die while crossing the Mediterranean sea in search of freedom.

All tracks composed by Gorka Benítez, except #9 by Dani Pérez

"The present Mrs Morton wanted to know if this was the same Gorka off Strictly Come Dancing. Such is the yawning cultural chasm in our house. It isn’t, but I’m happy to confirm that this Gorka is, like his terpsichorean namesake, also a corker. Salalagua finds him exploring more structured repertoire than on his 2004 Fresh Sound 'Free Session' (FSNT-173), which also included guitarist Dani Pérez and drummer David Xirgu in the line-up. Benítez is a Basque saxophonist/flutist who has moved between free-form, folk-influenced jazz and, on this, something that might be considered freebop-to-mainstream.

As the delicately shadowed cover art confirms, Salalagua is dedicated to the many people who risk, and lose, their lives trying to cross the Mediterranean, looking for sanctuary. It was strange to look up from one of its more plaintive tracks and see images of rescue boats on the screen next door. She watches news, not just Strictly.

There are mournful dances here, but also more urgent ideas, and the replacement of piano or keyboard with guitar keeps the harmony wide-open and always searching. Indeed, Pérez is absolutely key to the sound and success of the group. So consistent and persuasive a voice is he that the whole album feels like a coherent suite, even though the tracks come from very different places. I’d hoped to hear more of Benítez’s plangent alboka on this album. He seems to reserve the Basque double-reed clarinet for freer or more obviously “ethnic” projects. It might have served him as well here as his flute, though it has a distinctive resonance that didn’t come out of a conservatory training.

This is rightly credited as a trio project, though the saxophonist is the main composer. Xirgu plays very much for the group, sustaining a time-feel that is both strong and delicate. Benítez never hectors and often seems to play quieter when the emotion is most intense. Another very impressive release."