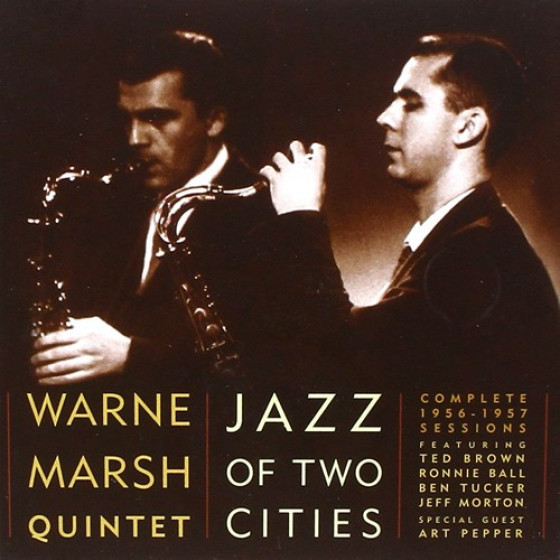 This is some very fine music by a band with an exceptionally rich collective imagination. Contains alternate takes and previously unreleased session. Highly recommended.

"These tracks date from the time Marsh spent back in his hometown - well, Los Angeles - from February 1956 to November 1957, leading a quintet that was something of a Tristano student reunion.

Disc one reprises the material that once appeared on the Imperial and Kapp labels, and there are some very familiar characteristics: improbably tricky themes deriving from familiar harmonic territory - Ball, Brown and Marsh all contribute - propelling the improvisation into fascinating demonstrations of agility. Marsh and Brown are never exactly competitive, but clearly stimulate each other intensely; at times they wrap around themselves almost organically, prodded on by Ball's perfectly-judged piano work.

Yet there's also a wider aspect to it; the two tenors give the front line a somewhat heavier character than you might expect from the experience of Marsh and Konitz: bassist Tucker gets to feature on his own "Ben Blew" and Jeff Morton gets to play with the sticks, which he never did with Lennie. By the time "I Never Knew" comes along, with its drum-breaks, stop-time bounces and Condon Gang coda, there's a distinct feeling that school's out.

Disc two introduces Art Pepper into the mix: nine tracks - "Aretha" through "Arrival" - feature him. Originally on a Vanguard LP, it was in fact Brown's date, came out under his name, Marsh no more than a bystander and adviver. A further move away from Tritano's influence, less convolution, though the two noted above, by Ball, and Marsh's "Long Gone", set up more thematic obstacle-courses. Pepper copes well, sometimes superbly, and also makes you realise why Konitz fitted so easily into his chair in the Kenton band.

The final 15 minutes is back into the Marsh-Brown configuration, and is taken from a TV show of the period. Bobby Troup does the talking, and shows an understanding of the music. A good, though inevitably brief, version of "Background Music", plus two minutes of improvising on "Pop Goes The Weasel". Really.

These sessions mark the start of Marsh's career as leader and organiser, and as such fill an important gap in his history."