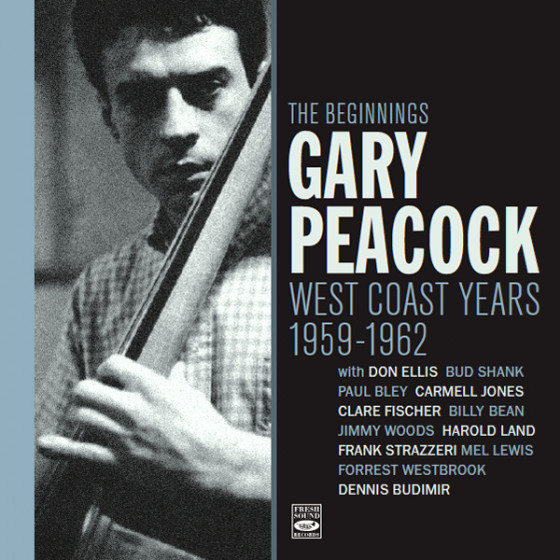 Bassist Gary Peacock (1935-2020) made his first recordings in the West Coast between 1959 and 1962. He was in his mid-20s when he arrived in Los Angeles, and although his talent was starting to get some recognition, not many would have counted Peacock among the most proficient young bassists in jazz. After the release of these recordings, there were few who wouldn't have.

Before him, the most prominent new bassists of the early 1960s were Scott LaFaro, followed by Charlie Haden, Steve Swallow and Chuck Israels. LaFaro's unexpected death in 1961 was a great loss because we most likely missed on further developments he would have contributed to the role of bass in jazz. Gary Peacock's push for innovation was a win for the same reason. The Peacock who suddenly burst in 1962 onto recordings with Jimmy Woods, Clare Fischer and with Don Ellis and Paul Bley was among the most challenging young musicians in jazz, a bassist learning to make his way into the most advanced groups. His playing had come far since his recordings with Bud Shank or Carmell Jones two years earlier, in an evolution that had no turning back.

Gary Peacock was sure that “although you may have an idea of where you are in your work, a record will show you where you really are —you and anyone else who hears it.” Listening to this compilation of his early recordings, you may find the answer.

Original recordings produced by Dick Bock, except #1 by Forrest Westbrook, and #6 by Lester Koenig

"Bassist Gary Peacock, who died in September of 2020, was probably best known for Trio '64, his sole album in 1963 with Bill Evans, as well as his work with Albert Ayler, Paul Bley, Marc Copland and Keith Jarrett. But before Trio '64, Peacock spent several years in Los Angeles working as a sideman. On the West Coast, Peacock emerged as part of a school of conversationalist bassists who didn't just keep time but were expected to engage with a point of view.

All of the tracks have an avant-garde edge, with Peacock driving firmly on top. During this period, Peacock became a rhythmic player with unusual bass patterns and improvised statements, at times provoking and other times supporting. All of these tracks belong to eight terrific albums, which makes this new compilation a smart starting point for experiencing Peacock's roots and playing intellect. Much of the music is ahead of its time, refusing to fit into the era's pop and songbook approach and carving out new territory for small-group jazz. On each track selected by Fresh Sound's Jordi Pujol, Peacock is playing powerfully and distinctly.

You need to hear this album to understand Peacock's approach on future leadership albums and sideman sessions. The tracks are all terrific choices."

"The first thing that is going to shock you about this collection of material by legendary bassist Gary Peacock during his early years is that at one time HE ACTUALLY LOOKED YOUNG!

Together with Charlie Haden, Steve Swallow and Chuck Israels, the recently departed Gary Peacock was one of the most important of the up and coming bassists, best known for his work with Keith Jarrett's classic trio alongside Jack DeJohnette, as well as with Albert Ayler and Paul Motian. This retrospective has him in seen different settings, all in Los Angeles (or Santa Monica) in trio or small group formats, showing a wide breath and width of his talents and taste.

There are some surprises here, as Peacock shows a debt to and influence from legend Charles Mingus, giving some clever work in Carmell Jones' Quintet with Harold Land/ts on “I'm Gonna Go Fishin’” and snapping with the trio of Clare Fischer/p and Gene Stone on “Free Too Long”. This same trio is quite lively, with Peacock's bass dominating “Stranger” and bopping to the nifty and  hip “I Love You”. A straight Jazz Messenger-ish “New Groove” and “Liddledabllduya” with Bud Shank/as, Jones/tp, Dennis Budimir/g and Mel  Lewis/dr sounds like vintage Blue Note material, while elliptical tones are by the more adventurous team of Peacock with Paul Bley/p and Nick Martinis/dr a Monkish “Form”  and sepia “Donkey”. West Coast warm."

"In his 1976 book John Coltrane the musician and lecturer Bill Cole offered the striking assertion that Coltrane (1926-1967) left “true records of his spirit here on earth”. The surpassing quality of this beautifully produced compilation reissue from Jordi Pujol’s Fresh Sound label – featuring early work from Gary Peacock (1935-2020) – would suggest that, for the questing bassist long renowned for his collaborations with, e.g., Paul Bley, Albert Ayler and Keith Jarrett, the creative integrity which Cole remarked in Coltrane can be discerned from the beginnings of what would prove to be a long and most distinguished career.

Taken chiefly from original sessions supervised by Dick Bock, the 12 tracks feature excellent sound throughout. I’ve relished Peacock’s work on countless ECM sessions but I’m not sure I’ve ever heard his sound captured better than it is here. Pizzicato throughout, his tone is as full and rounded as his diversely swinging and ever thoughtful lines are crisp and supple, in equal measure supportive and imaginative.

Much inspired by Scott LaFaro, right from the start Peacock had the most assured technique. And, early on, he began to distinguish himself as a composer of intriguing pieces: there are two Peacock originals here, the reflective ballad Stranger and the cooking slice of uptempo fun that is Liddledabilduya.

The programming of Pujol’s compilation is as thoughtful and stimulating in detail as it is resolved and satisfying as a whole. There are vivid finger-clicking standards (hear Peacock muse and groove on Willow, burn on I Love You) and blues-shot tropes (sample the Blakey-touched shuffle of New Groove or the mellow delights of Blues For Home) to enjoy, as well as the freshly exploratory approach evident in vibrant pieces by Clare Fischer (Free Too Long, with its remarkable interaction between Fischer’s fleet, up-and-probing piano and Peacock’s lithe, often upper-register lines), Carla Bley (Donkey, a revitalised 12-bar blues) and Don Ellis (Form, a shape-shifting, 10-minute odyssey where Peacock’s electrifying mix of strong walking figures, potent cross-plucking and rubato deliberation underpins and propels what is both the “furthest out” and most intensely cooking music here).

I’ve long enjoyed the work of Peacock on the early ECM releases Paul Bley With Gary Peacock and Ballads (featuring tracks recorded in New York between 1964 and 1968) so it was a particular pleasure to hear him here in the even earlier quicksilver company of Bley, Ellis and Nick Martinis. Recorded in July 1962, their Donkey and Form furnish equally instructive examples of the freeing up of the bassist’s role, even as the music swings like hell. As Ellis noted at the time, “Donkey […] is a standard twelve bar blues in F. However, the way Gary Peacock handles the bass line is fantastic and helps put this blues on a unique plane. It should serve as a model for any bass players who want to learn about the spirit of the ‘new thing’ in jazz”.

The key question of the changing interactions of drummer and bassist in the evolution of so-called “free jazz” in the late 1950s and early 1960s is but one of many matters addressed by Pujol in an outstanding sleeve-note. This features no fewer than 17 pages of information and insight, including mention of such a relatively unsung yet accomplished pianist as Forrest Westbrook (who takes a beautifully sprung solo on Willow). The assiduously researched text is complemented by some 40 black and white and colour photographic illustrations, as extensive biographical detail is integrated with a deft consideration of broader currents in jazz history – going back to the founding innovations of bassist Jimmy Blanton in the Ellington band of the early 1940s, for instance, and airing various issues concerning the evolution of “free jazz” in the 1960s.

The quality of musicianship from Peacock’s various companions is first class throughout. Relish sparkling work from the likes of Carmell Jones, Bud Shank, Harold Land, Jimmy Woods, Dennis Budimir, Clare Fischer and Gene Stone – not to forget Mel Lewis and the aforementioned Westbrook, Bley and Ellis. Fabulous stuff, from first note to last: an essential addition to the Peacock discography which no enthusiast of either Peacock in particular or premium brand early 1960s jazz in general will want to miss."