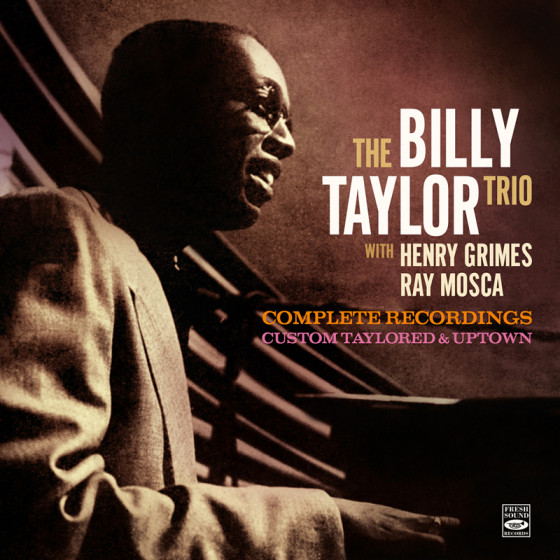 Billy Taylor (1921-2010) was, of course, one of the most technically gifted jazz pianists, and he managed to impress, displaying his great potential on numerous occasions. The fact that he was classically trained was not a handicap. His intelligent, musical approach was a welcome respite from much of the poorly executed performance technique of the day. That “Soul” music was no stranger to him is evident in his rendition of 'That’s Where It Is.' And, as the opening title, 'Warming Up,' intended to emphasize, and others like 'Easy Like and Coffee Break' in particular demonstrate, there is also a warmth and emotion very substantial mixed with maturity and craftsmanship -- all of which add up easily to enough reasons to explain Taylor’s enduring and widespread popularity.

"Custom Taylored" is a clean, well-executed album, offering a dozen examples of Billy Taylor’s tasteful and ever-changing piano talent. The delicate instrumental balance of the trio is another characteristic of Billy Taylor’s perspicacity. The interplay of bassist Henry Grimes and drummer Ray Mosca has been carefully nurtured into a powerful rhythmic mould. The synthesis of the trio is a joy to hear.

Billy Taylor showed his most restrained and suggestive moment in "Uptown" recorded live at the Prelude in New York on February 4, 1960. The album title refers not only to the 129th Street location of the club, on the outskirts of Harlem, but also to prevailing musical atmosphere. This was the performance of his new trio with bassist Henry Grimes replacing Earl May and drummer Ray Mosca on the drum stool long held by Ed Thigpen. Both new sidemen are firmly and cohesively blended to the leader and to each other, keeping the jazz pulse throbbing.

"Between 1950 and 1960, jazz was dominated by elegant jazz pianists. The list is long and includes Oscar Peterson, Sonny Clark, Red Garland, Russ Freeman, Lou Levy, Ahmad Jamal and others. A pianist who belongs on this list but is often forgotten is Billy Taylor. Billy's technique was unrivaled in many ways because he covered so much ground effortlessly, from stride and swing to bop and Latin.

As bassist and manager John Levy told me in 2010, “Billy was naïve —in a good way. He was an innocent and the classiest musician around. He was strictly educational. He didn’t hang out, and he didn’t hit on women or any of that stuff. He married Teddi and that was it. Everyone loved him.”

Billy formed a trio in 1952 and didn't stop working and recording. Now, Fresh Sound Records has released three of Billy's rarest albums —Taylor Made Jazz (1957), Uptown (1960) and Custom Taylored (1960). Two of the albums —Taylor Made Jazz and Custom Taylored feature all originals by Billy. Uptown, an album recorded live at New York's Prelude, features three originals, and the rest were other jazz artist's songs.

On these three albums, we're reminded how spry and melodic Billy's compositions are and how good and warmly received he was in a club setting. His technique was always breathtaking and in the pocket. And his sidemen were top-notch. On Custom Taylored and Uptown, Billy worked with bassist Henry Grimes and drummer Ray Mosca. On Taylor Made Jazz, Billy was joined by bassist Earl May and drummer Ed Thigpen. The session also included a chunk of Duke Ellington's band: Clark Terry and Willie Cook (tp), Brit Woodman (tb), Johnny Hodges (as), Paul Gonsalves (ts) and Harry Carney (bs)."

"Better known for his educational work than his stellar playing, pianist Billy Taylor was one of the early boppers, playing with the likes of Ben Webster, Stuff Smith and Slam Stewart before focusing on his popular jazz radio program Jazz Alive. This release shows his classy touch and style, akin to Hank Jones, but maybe with a bit more muscle, but still baptized in the church and school of lyricism.

In 1960, Taylor flexes his extensors digitorum lungus in a studio trio setting with Henry Grimes/b and Ray Mosca/d and a concert performance with the same gents in NYC. In the studio, all of the tunes are Taylor originals, and they range from the fun “Uncle Fuzzy” and “Don’t Bug Me” to the thoughtful “Lonesome Lover”, with the pianist digging into “Native Dancer”. At the Prelude Club, Taylor brings in a bit of Gershwin on a lithe “’S Wonderful” and throws in some churchified beats for “Moanin’” and “Soul Sisters” while he bops with the best on “Jordu” and “Biddy’s Beat”. This guy definitely deserves a re evaluation.

As with all things from Fresh Sound Records, there are great liner notes in the booklet as well as session material to put the records, and artist, in proper perspective."